Can I use multiple profiles or identities in Google Chrome in the same time?

Some of my accounts are bound to personal gmail address and some for business gmail address. They are needed for automated logins like on StackExchange websites.

So if I want to login to this group, I have to sign out from business gmail and log in to private gmail just to be able to log in to StackExchange.

Google Chrome does support multiple profiles: https://support.google.com/chrome/answer/2364824?hl=en
Every profile is its own separate instance of Chrome, with its own saved tabs and sessions.

I've got a button in the top right of my screen which lets me switch profiles. I use it both on my work computer and my personal computer. The screenshot is from Chrome 46.0.2490.80 on OSx 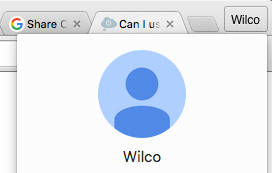 Awhile back I was using the same computer for work and home, I ran into the same issue with having to use my Google accounts to sign in to other services. So I set up a second profile in Google Chrome, and then set up icons for each profile so I could quickly access them at the click of an icon.

I'm on Mac OS, but the same should be possible on Windows as well.

Generally the first profile is named "Default" so the command to start an instance with that profile would be:

As explained at https://mathiasbynens.be/notes/shell-script-mac-apps we can set up app icons on Mac OS by creating an executable bash script somewhere in your $PATH, I usually create it in /usr/local/bin:

Then you create an simple shell script for each of your profiles, that contain each of the above commands to start the browser instances. For instance, create a file called chrome_personal.sh:

Now use appify to create an icon from the shell script:

Then repeat the process for any other profiles you want icons for.

You should be able to set something like this up on Windows, too. You'd just have to create the custom icon on your Desktop or in your Taskbar and use the same above options like --args --profile-directory=Default after the command in each icon, and the process for setting the icon will be different. (I don't have a Windows system to test but it should be just right click the icon and select "Properties", I believe).

By default, Google Chrome does not support this functionality. As a work-around, you can download Google Chrome Canary, which is the development version of Google Chrome with the latest features.

Canary can run as a separate instance of Google Chrome entirely, and allows for the installation of add-ons, keeping your history & sessions, tabs etc.

This should allow you to achieve what you're looking for, by using standard Google Chrome for your business account & then Chrome Canary for your personal account, or vice versa.

0
Google Chrome - Auto log-off from sites
1
My wife used this computer for her Gmail work email and no longer works there. I can't log her out
2
Log in to Google Maps with my private (non-administered) account
0
Can Chrome/Google Track Multiple Accounts After I use Ghostery, CCleaner, reboot router etc
7
How can I change the default google account in google chrome?
1
Google Chrome macOS: transfer all user profiles and passwords