I get a red bar when trying to install windows 7 DVD, and it freezes

I get a red bar when trying to install windows 7 DVD, and it freezes.

I read here https://social.technet.microsoft.com/Forums/windows/en-US/aee2b86b-ab1d-409a-b8ca-e0f6a4c90b3c/windows-7-pro-installation-media-stalling-at-startup-screen?forum=w7itproinstall to turn off secure boot. But I have. (if secure boot is on then it doesn't get that far as booting the DVD, it says "EFI DVD/CDROM ... has been blocked by the current security policy". So I have turned off secure boot).

The Win7 DVD (I made with the Win7 download tool), it seems to boot whether the motherboard firmware is set to legacy, or set to UEFI.. Though when setting the motherboard firmware to Legacy I get the ACPI BSOD error like the BSOD in this question https://superuser.com/questions/1005972/error-with-winpe-the-bios-in-this-system-is-not-fully-acpi-compliant. When set to UEFI I get the red bar. (I am talking here about a Win7 DVD not a WinPE one but the BSOD in that superuser question has the same BSOD).

BTW. I have a Win7 USB I made with rufus some time back. That one isn't recognized in the "BIOS" when the "BIOS" is set to UEFI.. And when set to legacy it is recognized and boots but gives the ACPI BSOD error. I would try http://www.eightforums.com/tutorials/15458-uefi-bootable-usb-flash-drive-create-windows.html to create a Win7 UEFI USB but I don't have a spare USB at the moment to test that with. So right now I am just trying to get it to work with DVD.

Interestingly.. an old Macrium USB had the ACPI BSOD (as mentioned in this question Error with WinPE "The BIOS in this system is not fully ACPI compliant" But a newer Macrium whose rescue USB is based on WinPE 10, doesn't have that problem. So it should be possible for a MS Win7 DVD to be updated such that it doesn't have the ACPI BSOD issue. 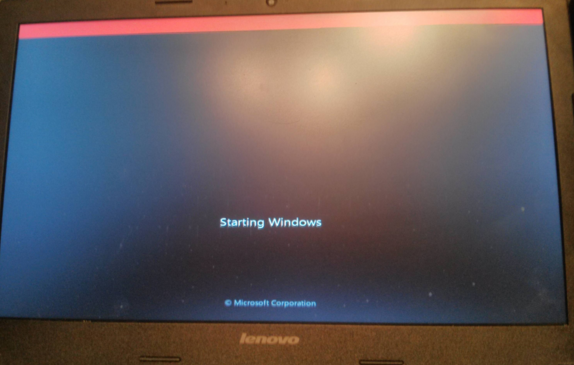 I have tried removing partitions by booting a partition wizard dvd. I still get the same symptoms from the Win 7 DVD.

As requested, here are pics of the GUI for the motherboard hardware(i'll try not to say BIOS). I'll include a pic of the BSOD too which appears when booting the motherboard firmware set to legacy mode.

In the boot tab, choosing UEFI, causes the security tab to have the secure boot option which can be enabled or disabled.

The exit tab has an option "os optimized defaults" but whether set to win8 or other os, I get the same errors. The BSOD when set to legacy. The red bar when set to UEFI.

And I don't think setting SATA between AHCI and Compatible, makes any difference to the symptoms. (not that it should). 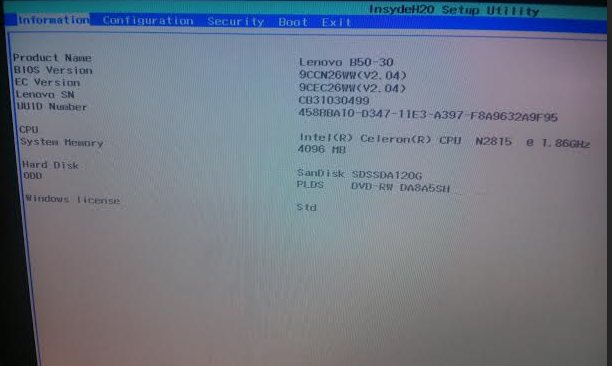 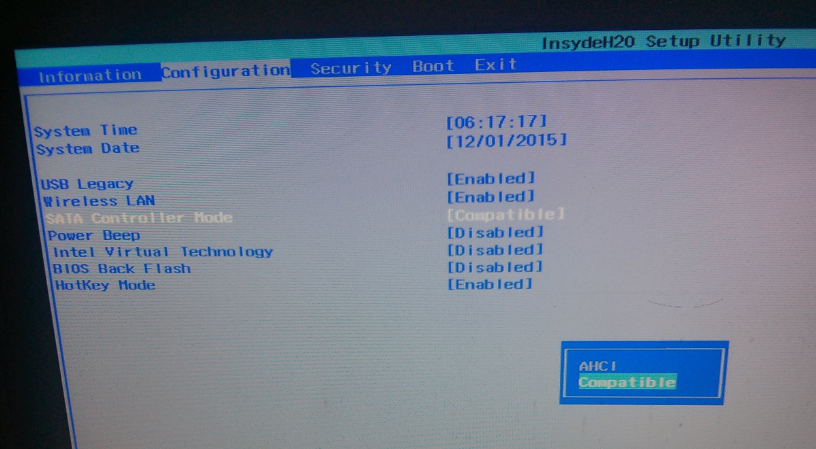 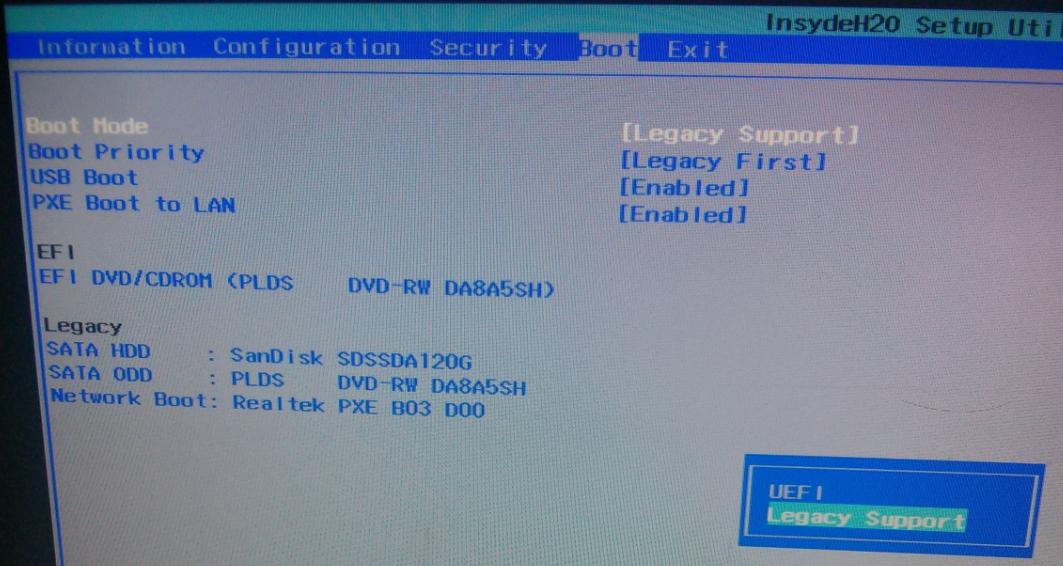 Below is the BSOD that occurs when choosing Legacy mode

Below is the message about secure boot.. if I choose UEFI thus getting the option of secure mode enabled/disabled, and choosing Enabled. It won't get as far as booting off the DVD.

And the main error screen i've shown you earlier.. The red bar while the 'starting windows' image/text appears. That's UEFI with secure mode disabled. No image below because it's above , it's the first picture in the post. Really the only two relevant pics are the red bar one and the BSOD one. The load of UEFI pics were requested though.

As another thing to try. I building a Win PE 10 USB by making a macrium usb and using it as a PE for Win7. By making a Win7 directory on it and copying the contents of a Win7 CD onto it, and running win7 setup. It got quite far into the setup, I got this like this screen

it expanded things to 100%, then at some point restarted.. as it should..

but when it restarted, then it said "starting windows" and it hit a red bar again.

I have often found that when it says starting windows and the red dot appears as if a coloured animated logo is about to appear, then I get the red bar too at the top.. So it looks a bit like a graphics issue but there's no vga or graphics option to change in the BIOS.

So to summarize findings so far

With UEFI, I get the red bar, it doesn't get far. With legacy I get BSOD

Cannot be seen as EFI.

It doesn't get far.

*Booting from USB, with WinPE 10 with a win7 folder and the contents of a win7 dvd in there.

UEFI, it getes an installing windows screen, restarts (probably to complete installation), but then gets the red bar.

I have updated the BIOS. I don't know why but i'm finding now that my Win 7 64bit DVD (and no doubt a 32bit one too) isn't recognized in EFI. Not surprisingly it doesn't have efi\boot\bootx64 file that i've noticed is necessary on USBs too. maybe it's necessary on DVD too, though that doesn't explain why previously, I was finding a win 7 DVD was recognized as EFI . I don't know if that's the BIOS update that removed that functionality! Win 10 DVD has efi\boot\bootx64 file and boots fine.

Windows 7 doesn't support the new UEFI GOP (Graphics Output Protocol) and requires VGA option ROM (BIOS interrupt 10 (INT 10H)). Win8/10 supports GOP and reads the UEFI Logo and displays it during boot for a smoother boot. And it seems that your UEFI always turns GOP on and disables VGA, so Win7 can't be used and hangs at Starting Windows with the graphic artifacts.

I found a much better easier way for this red bar problem.

jay abendanajay abendana
1
New contributor
jay abendana is a new contributor to this site. Take care in asking for clarification, commenting, and answering. Check out our Code of Conduct.
1
Add a comment  |
-1

This may have been solved and may be different but I had this problem also, but will put my "fix" in case anyone it can help anyone else?

I just had the same issue trying to install windows 7 pro. I went back to the Bios and on the 2nd tab I went down to OS Windows 8.1 and selected it and their was an option for Windows 7 I selected that saved and exited and it worked.

5
How to CLEAN INSTALL Windows 7 Professional 64Bit on Dell Inspiron 15R Turbo / Special Edition laptop?
2
Unable to install WIndows 7
2
Windows 7 SP1 with NVMe driver does not load on VMWare 14
2
What is the purpose of OS Selection setting in Aptio Firmware - Asus Laptop
2
Error with WinPE "The BIOS in this system is not fully ACPI compliant"
0
Is it possible that newer hardware only supports Windows 10? Can I use Windows 10 drivers during Windows 7 installation?
0
Installing Windows 7 on a new EFI based laptop, cannot enter Windows 7 setup utility?
0
How do I install an operating system for skylake processor?
1
Windows 7 UEFI stuck in "starting windows" screen

1
Can I install UEFI Windows 8 through a DVD or must it be a USB?
15
Do hard drives need a GUID partition table (GPT) to boot in UEFI mode?
3
UEFI Legacy boot hidden - tricks to unlock it?
2
Error with WinPE "The BIOS in this system is not fully ACPI compliant"
13
When UEFI/(Motherboard Firmware), is set to UEFI(not legacy), USB is not detected
1
Empy boot sequency in BIOS
0
Cannot boot with UEFI and cannot install image with BIOS - What do I do?
0
What are the options for booting from usb when the legacy boot option is not supported by the bios?