How can I tell if a JPEG was saved as Progressive?

I received a set of photographs from a photographer and need to confirm that the JPEGs were not saved as Progressive JPEGs. I have Adobe Bridge and Photoshop -- how do I check this?

Check out Detecting Progressive JPEG. The author posts links to a number of scripts people have developed:

A couple of identifying bytes can be used to recognize the files. A progressive DCT-based JPEG can be identified by bytes “0xFF, 0xC2″. Also, progressive JPEG images usually contain multiple scans so you can look for a couple of “Start of Scan” matches (bytes: “0xFF, 0xDA”). The author used a simple Bash command to get accurate results:

The link also contains a number of other useful tools.

The plot thickens (thanks to user PussInBoots for alerting me to dig deeper). The question asked how to tell whether a JPEG was saved as Progressive.

If you're on a unix, use the file command:

For future generations - there is a simpler way. Just check it with Irfanview. Click on Image->Information. 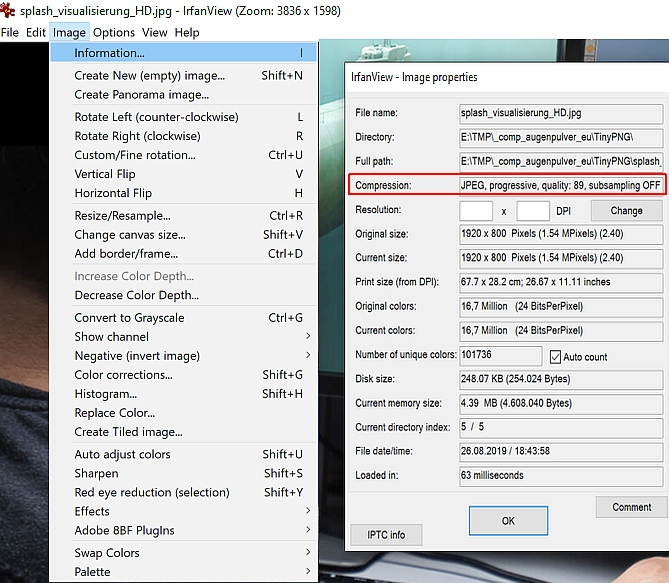 Not the answer you're looking for? Browse other questions tagged adobe-photoshop jpeg adobe-bridge or ask your own question.

5
How can I reproduce a logo?
5
What’s a good way to extract the layers from a PhotoShop file, without using PhotoShop?
4
In photoshop 7, how can I change the color of text that has already been saved as an image
0
Opening a .jpg image in Camera Raw
0
CS5 Bridge labels & rejects in lightroom
3
how to save an amazing jpeg from the evil grey squares
7
Is there a way to find only progressive jpegs on Mac using Adobe CS or other apps?
7
Photoshop can not open a JPEG but somehow Microsoft Paint can