After updating my graphics driver to the latest version from NVIDIA (downloaded direct, not using Windows Update), my third monitor which is an Acer V226WL is not displaying the proper and native resolution. The native resolution is 1680 x 1050. I have a GeForce 660, and have had no problems until now with my monitors. The monitor is connected via DVI. 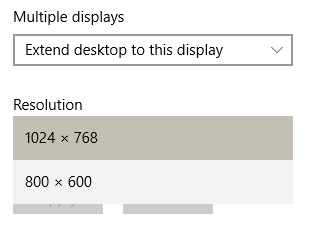 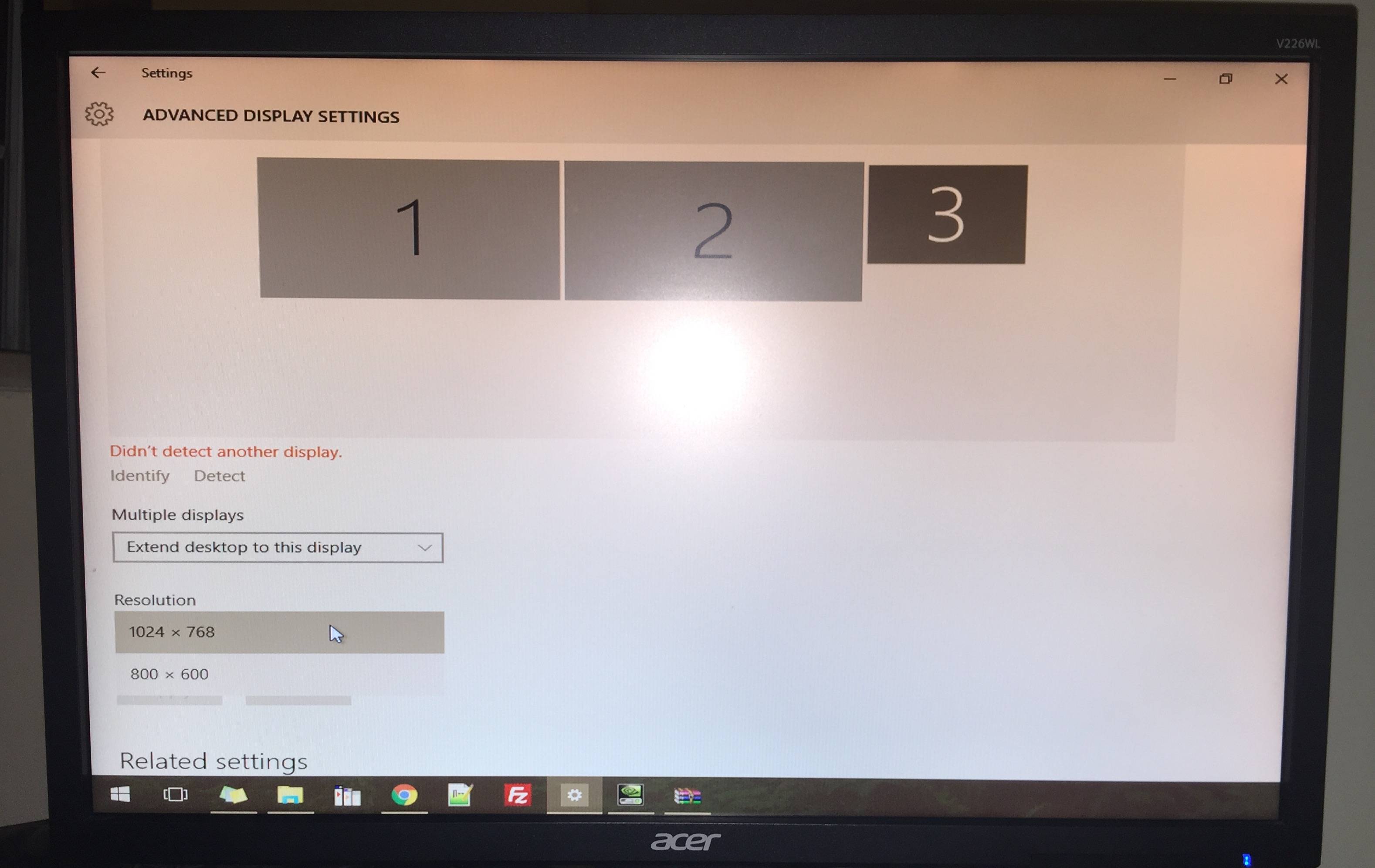 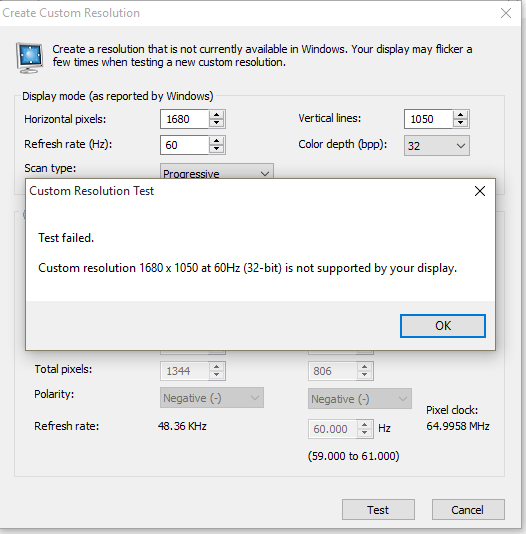 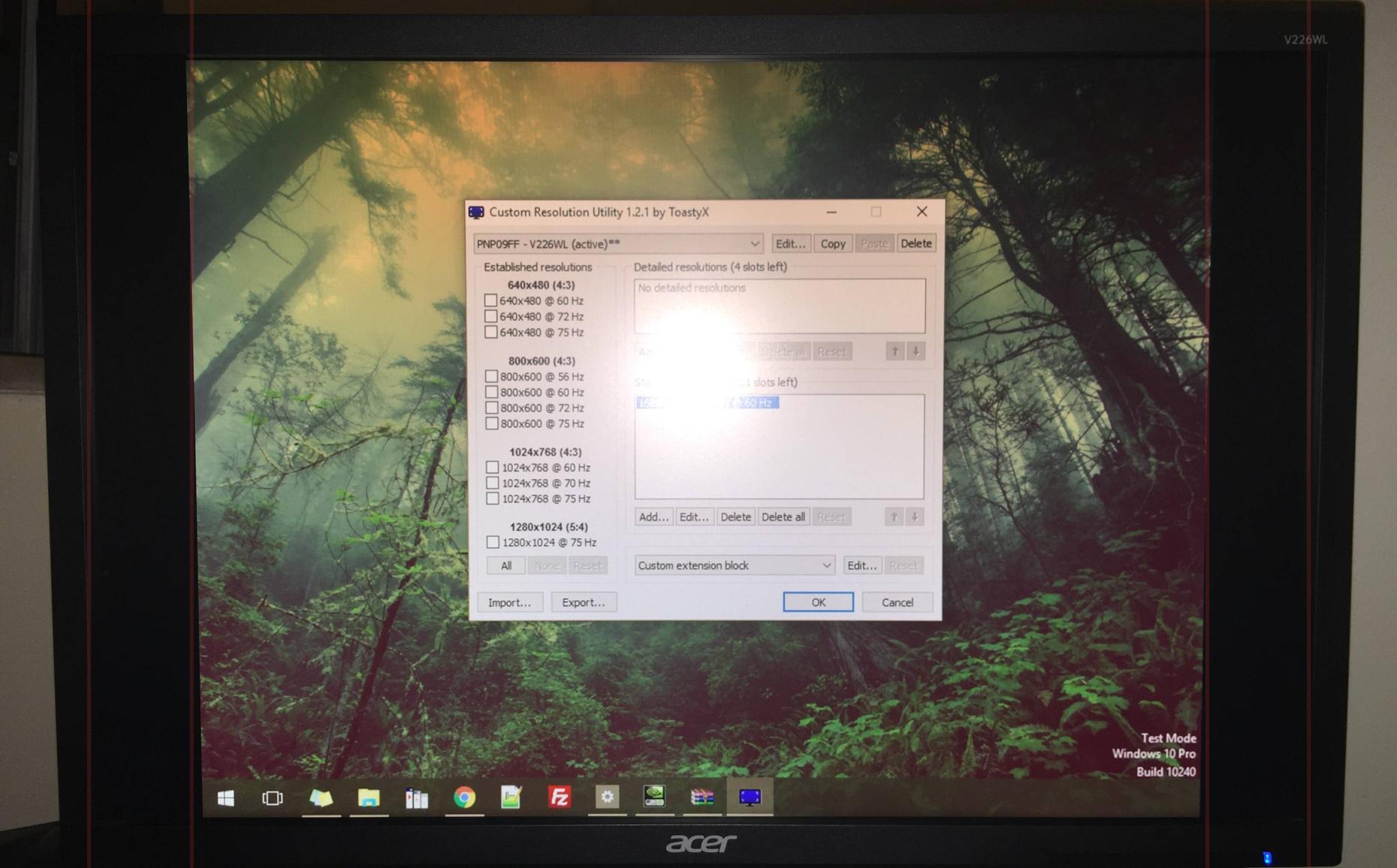 I setup the resolution to be 1680 x 1050 yet, take notice that the format is almost 4:3 with black vertical bars on the left and right. It's hard to distinguish in the picture. I added in semi-transparent red lines to show approximately where the monitor edge is, not sure if this is helpful but figured I should. Here is the original image, if you want.

Does anyone have any suggestions as to why this is happening, or how I can troubleshoot it? Like I said, it was fine before the driver update.

I had the same problem. I was using the Acer V226WL monitor with a Geforce GTX 1050 ti graphics card. My fix was to go into the NVIDIA control panel and when I created the resolution I wanted (in my case 1680 x 1050), I also had to change the timing to get the PC to accept the resolution. I changed the timing from automatic to CVT and success! Never had another problem.

I would test combinations of monitors. I've never seen it with nVidia cards, but internal graphics like intel sometimes limit the resolution as more monitors are attached, or prevent you from having three monitors at all. There's also a chance that a cable could be damaged between the card and the monitor. Like I said, try combinations to see if it's having three monitors that causes the problem or it's the specific monitor. If it's the latter case, I would suspect that either the cable is damaged or the monitor is not properly identifying to the card.

That would explain how in the first screenshot you posted it shows "didn't detect another display."

Getting back at you, following the comment you posted. As I read it, you're looking into Windows 10's native screen resolution settings, not GeForce settings.

What I would do: 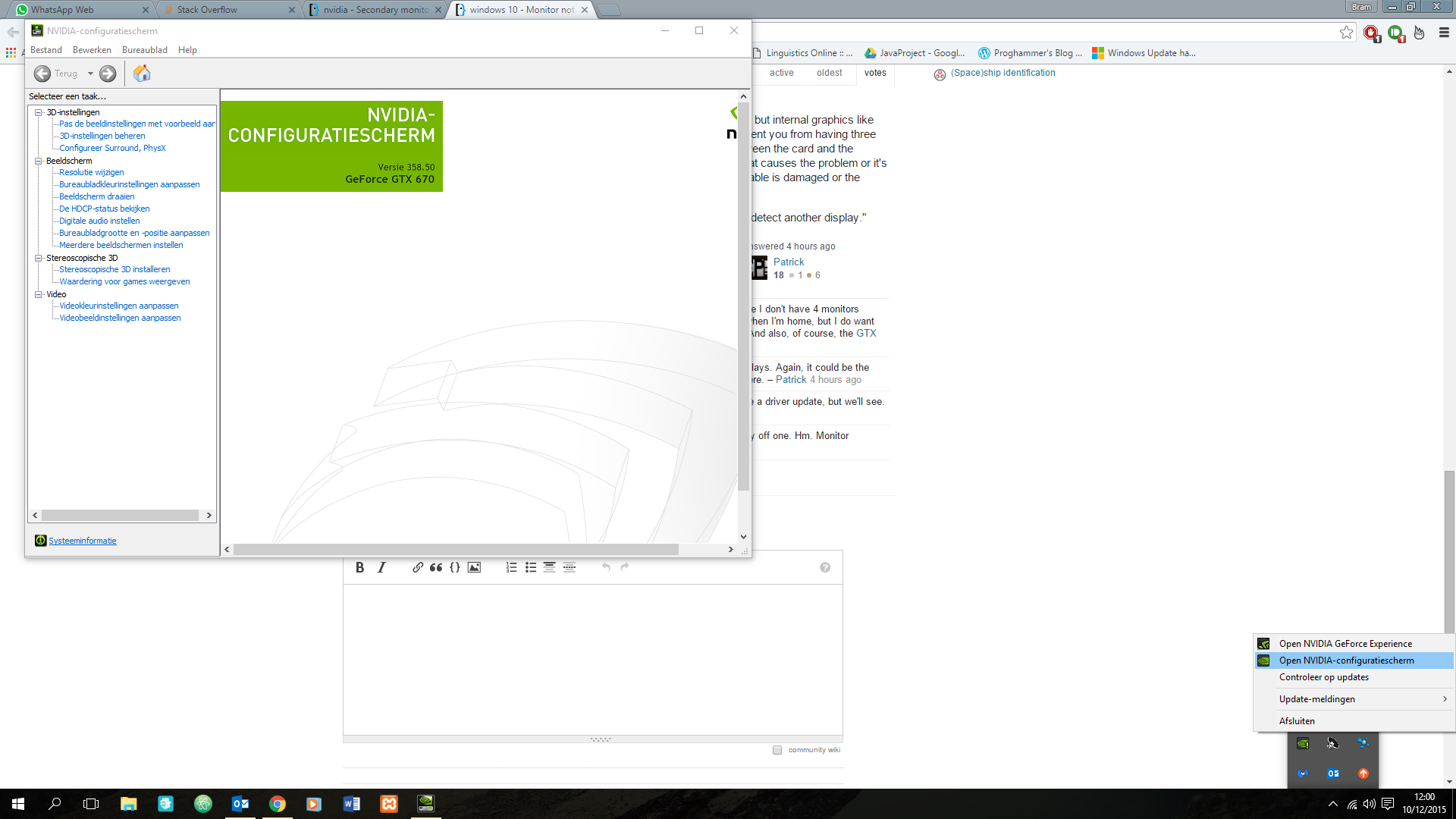 I was using this cable which had decent reviews on Amazon:

I decided to look at the official VESA DisplayPort site to see their recommended cables (http://www.displayport.org/products-database/). There's only a handful of brands. After searching for them I settled on Accell because of availability. Actually I couldn't find the exact model because the product database only listed 1.1a DisplayPort cables but I hoped that a 1.2 cable from the same manufacturer would work. I got this cable:

Haven't had the issue since changing out the cable.

Note, before changing out the cable, a workaround that worked for me was simply unplugging and re-plugging in the DisplayPort cable from the back of my video card.

My second monitor wouldn't display in proper resolution in Windows 10 after previously working in Windows 10 (and also in Window 7). I just rebooted one day and the monitor was stuck in 640x480 with no option to change it. I'm using AMD Catalyst 15.7.1. After trying several things I went to device manager uninstalled the Generic PnP monitor driver (i.e. not display adapter driver) and rebooted windows and now it displays the proper native 1920 x 1080 resolution.

In my case this problem was caused by a bad adapter display-port<--->VGA.

Swapping them fixed the third screen resolution issue. (A different monitor worked with this bad adapter).

The answer is the monitor.

The answer most likely is the monitor.

As some suggested, the monitor itself was just dying. I bought the exact same monitor new and replaced the one not displaying the native resolution (without changing any cables or connections).

Instantly, it showed the correct resolution.

While I'm not sure what caused this, I know the cause is the monitor itself.

If anyone can give an answer which explains what part of a monitor's hardware would and can cause this to happen, I'll change my accepted answer to theirs.

Logged in to say I just got this issue as well. Monitor been working well for years Dell U2711 suddenly reports 1680 max res and not the 2540 it should be able to get. Card is a new gtx 1080ti - worked fine for a week with all monitors. Swapped back out to my older gtx690 - same problem exists. Nvida and Windows 10 both just updated - driver and 'creators' updates just applied not sure of the culprit - suspect nvidia. I have a triple monitor setup (all 27" same res but diff brands) and only one screen is affected. Display Port input will not work on it with either gfx card I have or combination of cables, dvi / hdmi work at lower resolution. Cable swapping, port swapping, reduction to just the one screen etc and repeating / trying already all of the opening posts comments do not help. I have a combination of 4 different Display Port to Display port cables - different brands - and no change (dead connection - screen detects the cable connections but adv no signal), also HDMI to DVI and Display Port to DVI (cables not adaptors) work but only at the low resolution on those ports. During POST of the machine I also get nothing via Display port connections. So you'd think its the screen right?

Weird thing is from my Macbook Air 2010 via a mini Display Port (not thunderbolt) to Display Port it works fine - this is the cable I used to use on the gtx690 - same cable tested on that reinstalled card and I get a black screen still. So I suspect firmware update from Nvidia has nuked somthing.

Had the same issue. I just unplugged all monitors like starting from scratch. Guess Windows got confused after driver install.

For my situation, following worked

Unfortunately this fix isn't permanent and I have to repeat the process every week or so. I don't want to disconnect - reconnect HDMI cable in order to save wear and tear of the HDMI port. Is it possible to simulate removal of HDMI cable through code or settings change?

I had a similar problem on a Surface Book 2, with a Philips 272B8Q ( QHD 2560 x 1440) connected through displayport on the Surface Docking Station.

For me, solution 5 of this MS document was the only thing that solved it right away...

Similar issue here. In my case the HDMI cable was causing the issue. Swapped out and resolution went back to normal.

My problem was connecting my active mini-dp (mini displayport, miniDP) cable into the computer before connecting it to my external monitor. I think this is because the little 'active' chip in there doesn't know what to tell the computer since it has no monitor to talk to, and so just reports a minimum resolution (in my case, 640x480). Once it later sees a monitor, it doesn't update.

I had the same problem. After doing online research, here's what worked for me.

I had the same problem.

I switched the cable from hdmi 1 to hdmi 2 and somehow it worked.

When I try to setup windows10 , the monitor dose not work, it ask me to change the resolution.

I fix it by change the vga cable of the monitor. The problem is the bad manufactory VGA cable.

Not the answer you're looking for? Browse other questions tagged windows-10 resolution display-driver or ask your own question.