After update 1511, all my VMs broke as far as networking goes. The switches did not appear anymore in Network Adapters, but were still listed in the Hyper-V Switch Manager. I deleted the switches from here but when trying to recreate, I get this error below. It happens for all 3 types of switches. I've tried the nvspbind uncoupling, removing/reinstalling the Hyper-V feature, and tried to scrub my registry for the offending adapter. 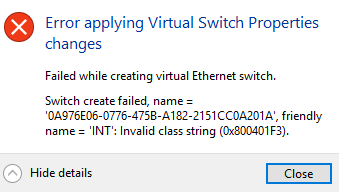 I still see a Hyper-V switch listed in nvsp for some reason, but it does not appear anywhere else, including device manager. Is there a way to get rid of it from here, in case it's blocking creation of new switches? 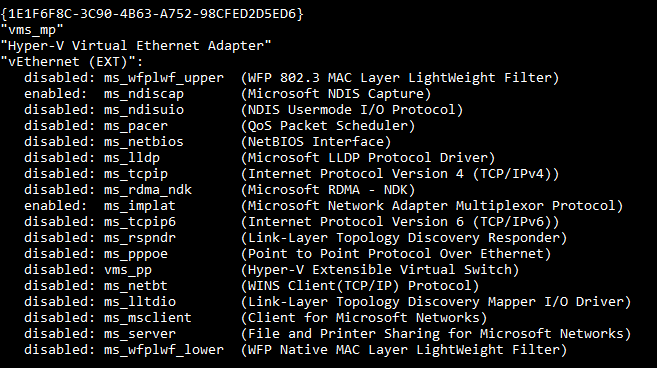 I tried almost everything under the sun to get it working, from updating all drivers, a wireless adapter, reg keys to delete all switch entries, etc. Also decided to uninstall my physical NIC driver as a semi-last resort based on a troubleshooting article to see if reinstalling would help. Well, this completely destroyed any chances of fixing the issue. I could see the NIC in Device Manager after reinstalling, but it would not appear in Network Connections at all. I uninstalled several apps that could have been interfering with it, like VPN apps, but even after that no luck.

I decided to go with my last resort, a roll back of the update. I was a bit leery of this option, as there's always the chance updates/roll backs could fail and require a clean reinstall of everything. Decided to go with it and prayed. Roll back took about 10 minutes. Once the PC came back up, everything appeared to work normally, including my Hyper-V networking. I then checked the option for Defer Upgrades, as I'd rather not deal with new update bugs.

Hopefully this helps anyone else with similar issues.

Not the answer you're looking for? Browse other questions tagged hyper-v windows-10-v1511 or ask your own question.

0
Can't access the default gateway from my VMs using Hyper-V on a W8 Pro ASUS N76V
5
Cannot remove HyperV vEthernet (Default Switch)
4
How do I setup a working Wifi/Internet connection on Windows 10 hyper-v?
6
Port forwarding with Hyper-V virtual machine on Windows 10
0
Unknown vEthernet adapters
0
Why ipconfig shows NICs (Hyper-V) which arent in device manager and how to delete them?