I created an icon file (.ico) with Axialis IconWorkshop v6.70, containing several icons ranging from 256x256 down to 16x16. For the 256x256 I used a drawing that I copied/pasted from a drawing program. It shows correctly both in the edit window and the thumbnail/icon. The other resolution icons were automagically created from the large one by IconWorkshop. But when I close and reopen the file all resolutions are OK, except the 256x256, which appears as a black square: 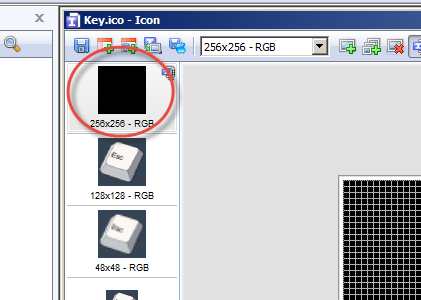 Is there anything that I missed?

After karel's comment I tried importing a .png image instead of the copy/paste, but the result is the same.

It could be a bug in IconWorkshop. In IcoFX's free edition I opened the .ico file, pasted the 256x256 again in and saved. The icon now shows correctly in Windows Explorer, and also in both IcoFX and IconWorkshop.

(The problem remains when I compile my Delphi application with the fixed icon file, though: the small icon shows correctly when I list file details in Windows Explorer, but not the large icon when I select thumbnail view.)

Not the answer you're looking for? Browse other questions tagged icons or ask your own question.