I am not very familiar with the difference between 3.0x4 and 3.0x16, but I did hear someone say by installing M.2, the PCIe's speed has to reduce to x4 too, which has a negtive influence on the performance of my graphic card.

Is this true? Should I change my spec?

Edit: Which tool is the best to tell whether my gears are working on their best?

It needs these lanes to connect to devices such as NICs, SATA ports, M2 slots, general PCI-e slots etc etc. But it does not have enough to connect everything at the same time. So manufacturers had two choices:

The last is nothing new. E.g. a board may come with two physical x16 PCI-e slots, but only have 16 lanes for them. Allowing the user to use one slot at x16 speed, or two slots at x8.

Your board does something similar. Rather than just two slots and 16 lanes it has 20 lanes, but 7 places to connect them to. One of those is the M2 slot.

page 12 of your motherboard's manual shows this quite nicely, including the default assigned max lanes: 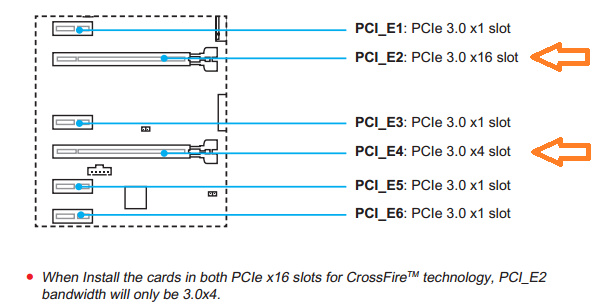 This seems to show 6 slots and 24 lanes. However when using both x16 slots both drop down to x4 speeds. This is probably where your "I did hear someone say" comes from. Not from the M2 part, even though M2 connectors can also be x4.

M2 however, can (and should) carry both SATA and PCI-e, eitherwith 2 or with 4 lanes.

In you case you can put a SATA SSD in the M2 slot. This will disable two of you normal SATA slots (see manual page 15) and give you no speed advantage over a regular SSD. Not a good thing, unless you have a spare SATA M2 or like the smaller form factor.

If you connect a PCI-e based SSD to the M2 slot it will disable two different SATA ports, but you will potentially get more speed. The manual does not mention reducing lanes the the x16 slots. Those will be unaffectec by the M2 SSD. 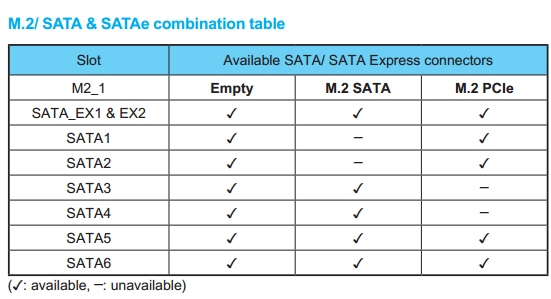 by installing M.2, the PCIe's speed has to reduce to x4 too,

UHm, no. PCI-e speed remains at 8GHz max for PCI-e v3. (and falls back to 5GHz for PCI-e v2 devices). Its speed as such is never affected. It number of lanes (and thoughput is lanes x speed) is reduced. Minor nitpicking perhaps, but I just had to correct.

which has a negtive influence on the performance of my graphic card.

Fewer lanes does mean less maximum thoughput. I reasonable guess is that using two PCI-e devices in both x16 slots will drop the performance of the cards by about 4%. Not much. But if you really want max gaming performance and two graphics cards then select another Z170 board, one which can power at least two slots at x8 (or fall back to older boards based on Hasswell-E (28 or 40 lanes) or X58 (40 lanes).

If you do not want extreme gaming (just very high performance gaming)then go for a single graphics card and put that in slot PCI-e #2. Put other cards in the x1 slots (you have 3 of those!) or in the other x16 slot if you can afford to drop about 4% in graphics performance.

NO. I have Z77 cipset, and after I install a 960EVO NVMe SSD in PCIEx 4x adaptor, Read and Write speeds of GPU memory slow down from 12 to 6Gb\sec.! I have 3 slots of PCIEx x16 3.0. They is no anoter slowdown cores, I tested with GPU test from AIDA.

Not the answer you're looking for? Browse other questions tagged graphics-card ssd motherboard pci-express or ask your own question.

2
Does the graphics card get more performance depending on which PCIe 3.0 slot it goes in?
0
Understand how this M.2 B+M Key SSD can work via PCIe Adapter Card with 2 slots (both 1 B and 1 M slot)?
1
Why would a Samsung 960 PRO 512GB show up as a 250GB drive on my machine?
0
hp nvidia quadro pro p2000 not detected by motherboard (msi Z270 gaming pro carbon)
1
PCIe slots and SLI enabled on mobo