I have an old PC desktop case, about from the ddr1 / single core k7 era.

I've modernized it into a much newer desktop machine (centralized around an MSI 970A motherboard, if it matters).

Everything goes well, with a single exception: there are some connectors in the case, which can't be plugged into anywhere on the motherboard. The common hddled, powerled, reset and powersw pins have their place, but these on the images haven't.

Here are the pictures for the not working connectors. They are:

I think, maybe some type of converter could (should) exist which makes it possible to plug these connectors into the mainboard. What is it?

P.s. I am asking not for product, I am asking for a name of the needed devices, or for a solution for the problem.

P.s.3. "There are probably no converters for this" is an acceptable answer.

P.s.4. Reacting the comments about the bad image quality: I tried to fix the first image, and substituted the other two with analogous images from the net. I hope it is now acceptable, if not I am ready to make it yet better. Unfortunately, I don't have physical access to the named machine any more, so I can't make better photos. 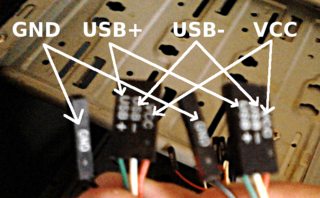 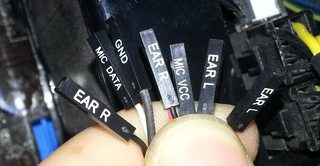 Oh god what a pain in the rear

Look up the pin out for USB 2.0 and figure out which connector goes where. It'll just work.

I believe this is the correct pinout

Audio gets a bit tricky. They've actually switched between different standards and they're not really compatible. If your motherboard lets you select between AC97 and HDA compatibility you could look up the pinout and connect them as needed. Wikipedia talks about it in detail as does the answer to my old question. I'd try matching up the connectors with the pin outs and see what happens. It might not work quite right without the motherboard/sound-codec being aware of AC97 though

If you could find something that goes from female HDA to male AC97 or a replacement for the whole front panel unit or maybe even a drive bay that does audio out, you could get headphone/mic jacks working.

When all else fails, read the manual. I found the manual on the MSI site and was able to find these pin-outs quickly. 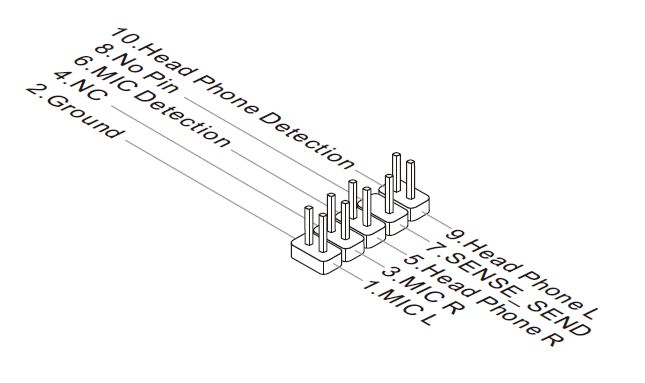 For the Front Panel USB connectors; 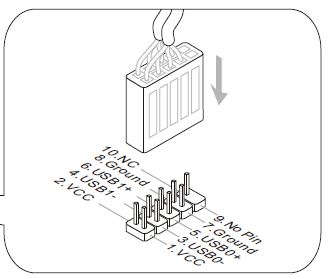 These can easily be connected without replacing the connectors or adapting them.

From a quick read into your MB, you need M-connectors.

You may need to contact MSI and order the correct ones, or flip through the net to find the right M-connector.

Not the answer you're looking for? Browse other questions tagged usb audio motherboard case pin or ask your own question.

38
HD Audio or AC97 connector - Which to use when, and what's the difference?