ConEmu: How to call msys2 as tab?

I want to create a 2x2 grid of console, and I want it to be my default setting, meaning when I open ConEmu, this setting to be the startup setting. I have written a task like below:

The problem is with the last command. I want to start msys2, but when I run my task, for the third line, I get a console, but it doesn't run inside the ConEmu, it opens it as a separate window. How can I fix this configuration?

Also, how can I set this configuration as the default one when I start ConEmu, while now when I start it, I only get a single cmd console.

Look inside msys2_shell.bat to get the answer. This batch runs mintty instead of bash shell. Useless. Change third line to full path to bash.exe -l -i.

There is "Startup" settings page in ConEmu, isn't it?

What to do is actually pretty simple, once you peel all the layers away. This works well as an invocation (make sure to modify it to your specific MSYS2 install location):

I would personally recommend setting the shell to inherit your PATH:

My ConEmu Tasks settings page ends up looking like this: 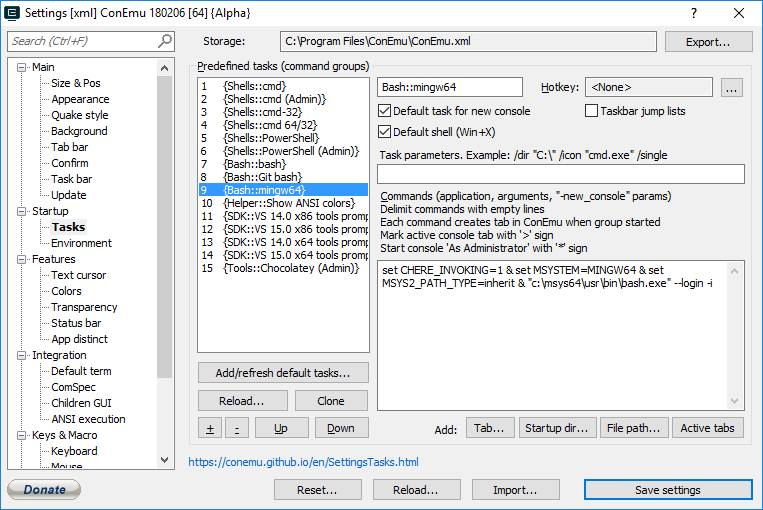 Breaking it All Down

MSYS2 likes to configure the shell according to environment variables rather than command line parameters. Passing options into a program that way might seem unnatural at first, but basically it just follows this simple series: set VAR=value & set VAR2=value & "c:\path\to\command" [args]

There's another variable MSYSCON mentioned by another answer and referenced in msys2_shell.cmd -- ignore it. It's only for use within the msys2_shell.cmd batch file and holds no bearing on the behavior of bash.exe or MSYS shell initialization.

The MSYS2 path has been intentionally hard-coded as c:\msys64\ since that's the default install location for the MSYS2 Windows installer. It doesn't make sense in this case to use %ConEmuDir% since that's relative to %PROGRAMFILES%, and MSYS2 is more typically installed relative to the root directory of the hard drive. Note that it does make sense to use %ConEmuDir% when referencing the MSYS2 shell that comes with Git for Windows, since that is installed relative to %PROGRAMFILES%.

There is no easy way to know the install location of MSYS2. There's no environment variable set up by MSYS2 either, as much as I wish there was. Wouldn't it be swell if MSYS2 had an option to export something liek MSYSTEM_HOME into your machine's environment? But it doesn't, so it's entirely on you as a user to know where it's installed and point ConEmu there.

Don't use it. The batch file is incorrectly named. It should be called msys2_terminal.cmd or similar since what it's actually doing is a setting up an entire terminal for the shell. This is a common terminology mistake, especially on Windows operating systems where there's never really been a clear separation of terminal from shell. Here's how it works, explained from a Windows-user perspective:

In this scenario, I want my terminal to be ConEmu and my shell to be BASH (mingw64). Therefore I want ConEmu to start the shell and only the shell. I don't want ConEmu to start mintty. Those are both terminals and that would cause us to get secondary pop-up windows -- one for ConEmu and one for mintty. But that's exactly what trying to run msys2_shell.cmd will do. So don't use it.

The only (half-portable) working solution I've found is the following.

Attention: Modify the relative paths above to match the path to MSYS2 on your system.

The solution is half-portable, since it explicitly states the ConEmu executable (change it to ConEmu.exe for x86).

I am not sure if the value of the MSYSCON environment variable matters. I've only set it for safety, because the MSYS2 batch file msys2_shell.cmd also sets it.

The msys2_shell.cmd is intended to be used directly from a CMD.EXE, with ConEmu64.exe / ConEmu.exe in the PATH:

That command opens a new MinGW64 tab in ConEmu.

tl;dr: I recommend the first approach. Here is a screenshot as a proof in ConEmu: 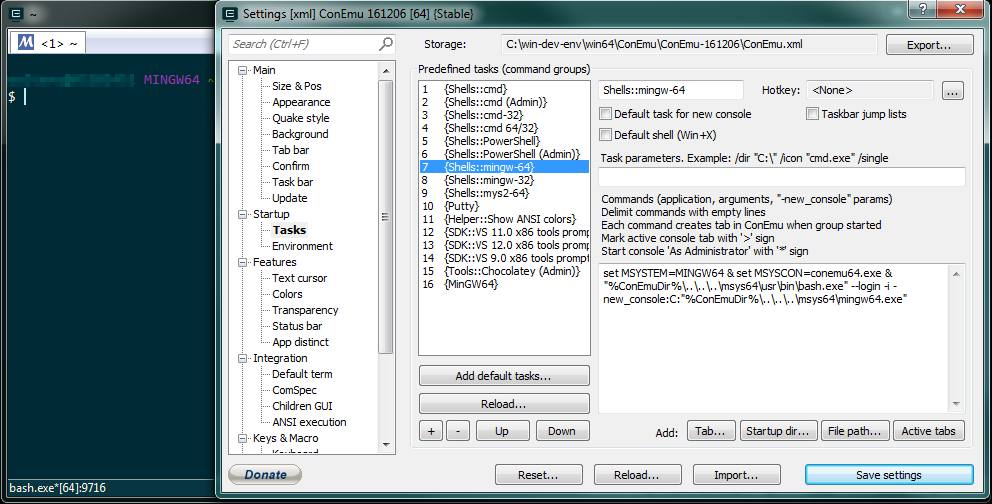 In recent versions of conemu, the msys2 shell comes as one of the default shells and can be found under:

If you have an old installation of conemu and don't have the msys2 shell, you can update to the latest version and run the 'Add/refresh default tasks' button under the 'Setup tasks...' button

Not the answer you're looking for? Browse other questions tagged conemu tasks or ask your own question.

0
ConEmu: How to call msys2 Portable as tab?

31
Conemu: How do I make several console windows in one tab from task file?
0
How do I start a tab as a different user from a predefined task?
4
ConEmu select startup console
12
Default console in ConEmu
0
When a task terminates in ConEmu console, how do I rerun it in the same console?
0
Run Task when ConEmu is started by running "cmd"
1
Make the sounds (e.g. beep) that PowerShell usually makes