What do these errors in Event Viewer mean?

I have been getting a lot of Event ID 10 errors when starting up my Windows 7 Ultimate 64 Bit(SP1). Two errors (sources are WMI and Service Control Manager) are seen very often that on every start-up they occures(or at log on?): 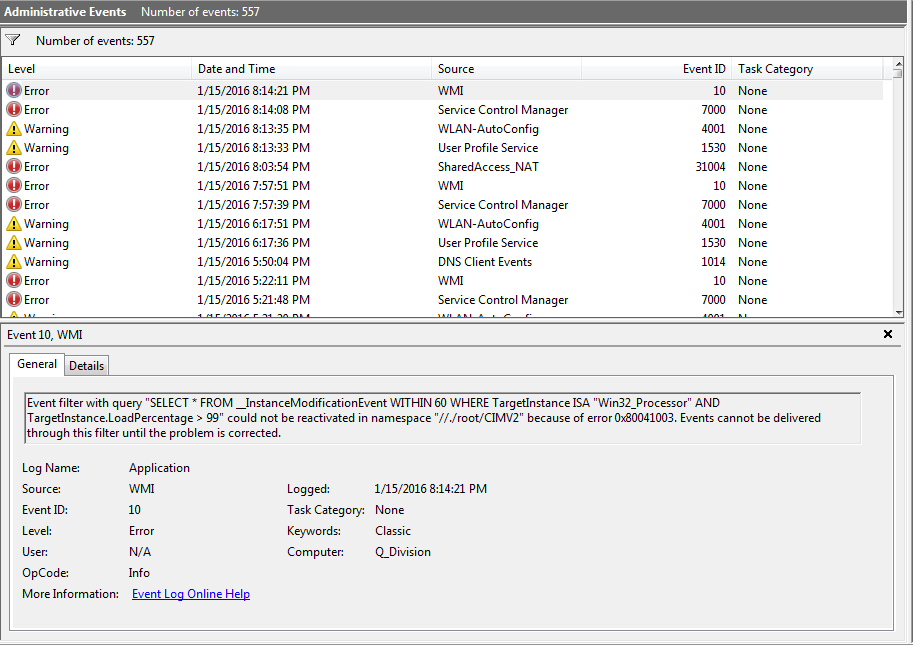 ( The first two errors )
Details from the General tab of the first error(i.e WMI) is given below:

Event filter with query "SELECT * FROM __InstanceModificationEvent WITHIN 60 WHERE TargetInstance ISA "Win32_Processor" AND TargetInstance.LoadPercentage > 99" could not be reactivated in namespace "//./root/CIMV2" because of error 0x80041003. Events cannot be delivered through this filter until the problem is corrected.

And the details from the second one is:

The NEWDRIVER service failed to start due to the following error: The system cannot find the file specified.

Also, I am seeing a delayed log-on(do not know whether it is related)?
Do anyone know what these errors are and how to rectify it?

The WMI error is a known issue:

They offer a FixIt to fix the problem, plus manual instructions:

After running the script the Event ID 10 errors related to this event should stop occurring. This does not remove any of the existing entries in the Event log, they would need to be manually cleared out of the application event log.

For the "The NEWDRIVER service failed" issue:

You have a service named "NEWDRIVER" registered with the system, but the file(s) it needs to run are missing. Since the files are missing, and your computer is behaving OK, you can just remove the reference to the service.

You should be able to do this from an elevated command prompt, with the sc (Service Control) command. Eg.:

Not the answer you're looking for? Browse other questions tagged windows-7 event-viewer error-logging or ask your own question.