Remove trailing whitespace at the end of table cells

I have opened a PDF file in Word in order to edit it (the original Word document is lost). During the conversion, each line of text and each table cell was given an extra space. Of course, they don't really hurt anyone except me and my slight OCD. I don't like trailing whitespace. 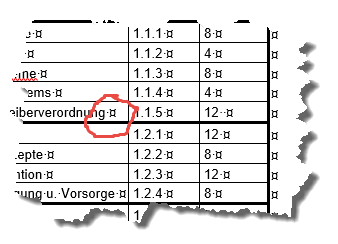 It's trivial to remove a trailing space at the end of a line (search for " ^p" and replace with "^p"), but there doesn't seem to be a special character for "end of table cell marker" in the find/replace dialog, and the Word "regex" engine doesn't appear to support anchors either.

A Google search brought me to this tip on how to add something to the end of a table cell (I planned to add something like "§§§" to each cell and then do a simple search/replace for " §§§"), but in Word 2016, I can't find the Style "Table cell", at least not in the German version of Word.

Any other idea I could try? Also, any idea how to remove one or more spaces at the end of a line/table cell? Quantifiers don't seem to work in a non-regex find/replace.

OK, I've been digging around the Word VBA object model and came up with this (Microsoft VBScript Regular Expressions 5.5 enabled):

Interestingly enough, my inital attempt (using Trim(C.Range.Text)) didn't remove the spaces, on the contrary, it added a paragraph marker at the end of each cell. Puzzled by this, I tried a regex \s+$ with the same results. Inspecting the local object tree, I found that a cell that contained the text Note  actually contained Note \x0d\x0d\x07 (I have since found out why this is the case). That's why I had to use that weird regex to find the last spaces in a cell...

I use a modification of Tim Pietzcker's Sub, where I use combination of Left() and Trim() instead of regExp (and also use the ActiveDocument instead of ThisDocument):

The guide you found appears to contain the answer: assign a style to the affected cells.

If needed, create a new style just for this purpose based on the style that the cells already have. You can then go back to the previous style, or leave the new style in place.

Not the answer you're looking for? Browse other questions tagged microsoft-word regex find-and-replace or ask your own question.

7
Replacing last character at the end of each line in a file
2
Matching character ranges and paragraph breaks in Find in Microsoft Word
1
Remove CR LF for all lines that are not followed by a specific number
1
Regular expression to match cell boundaries
1
RegEx with Word 2013. Match string AFTER known word to End of Line or <table>
1
Word, Regex for brackets, word, whitespace or lf
0
Trying to find-and-replace decimal commas with decimal points in MS Word 2007
2
remove the last column from a comma delimited file
0
Find/Replace using Regex