Does task manager run as administrator by default on Windows 10?

I was trying to close a non-responsive process, and after the first time I clicked "End Process", nothing happened. So I did it again and this time a window popped up saying "Access is Denied". Eventually the process did close, but this got me thinking..

Running it as admin via this method: 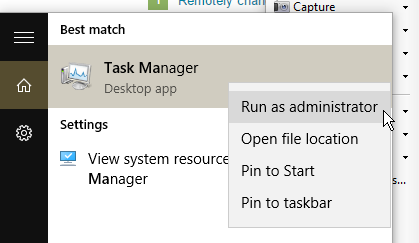 I don't see any noticeable differences between that and just doing Ctrl+Shift+Escape.

Note: This question is specifically for Windows 10 (and possibly 8/8.1) and I am running Pro. Also, my UAC set to 'Never notify'.

Does task manager run as administrator by default on Windows 10?

Only if it is being run from an administrator account. Ben N's answer below has a great explanation of how this is actually implemented.

If I had ran task manager as an administrator, would it have still gave me this "Access is Denied" message?

Yes. There are plenty of processes that even an administrator is not permitted to end. Furthermore, trying to end a non-existent task also produces this error message.

If the reason you had got the "Access is Denied" message was due to Task Manager not running as Administrator, you would get this very explicit message telling you so: 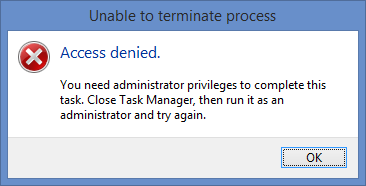 Furthermore, is there any difference between running it as administrator or not?

Yes, but you'd have to run it from a non-administrator account to see it.

Incidentally all the above behaviours are exactly the same as in Windows 8/8.1

The existing answer is very good. I'll provide some technical details, for those that like such things.

Taskmgr.exe (in \Windows\System32) is the program that is run when you call for Task Manager. Inspecting it with a hex editor, I discovered that its manifest sets requestedExecutionLevel to highestAvailable. This means that if you are running as a local admin, Task Manager will require you to elevate. You can easily demonstrate this by setting UAC to the highest level and pressing Ctrl+Shift+Esc to launch Task Manager, noting that it produces an elevation prompt. If UAC is not at the highest level, Task Manager can silently elevate because it's an integral Windows component. In short, yes, Task Manager runs as admin by default when possible.

highestAvailable (as opposed to requireAdministrator) allows non-admins to run the program without being asked to elevate, but they of course won't be able to do anything administrative from it.

A quick-and-dirty way to see if a program is running elevated is to enable the UAC virtualization column in the Details tab of Task Manager. If and only if a process's entry in that column is Not allowed, then it is elevated. (Administrative processes cannot be compatibility-redirected.) You could also check whether it has the powerful privileges (e.g. SeSecurityPrivilege) using Sysinternals Process Explorer.

In response to your question about still being denied access to some processes, Windows has a concept of protected processes that absolutely cannot be touched from user mode, not even by processes running as SYSTEM; the protection is enforced by the kernel. Only essential system services get this kind of guarding. One such process is csrss.

I've discovered another possible cause of this error message, which is not something I would have ever thought to check for when troubleshooting an error of "Access Denied".

Microsoft introduced a new resource management mechanism, beginning in Windows 8. When the system's resources are in high demand, Windows may choose some processes to place into a "Suspended" state, in order to free up their resources for other processes. A Suspended process is essentially frozen until the system un-suspends it, which most commonly occurs in response to the user initiating an interaction with that process. For whatever reason, Task Manager is not exempt from this mechanism, and in fact it has a particularly unexpected behavior: when Windows puts taskmgr.exe into the Suspended state, its "Update Speed" setting also gets altered, from whatever you had it set to, to Paused. However, when the process is un-suspended, the "Update Speed" setting is not restored to its original value - it stays on the Paused setting!

When Task Manager's "Update Speed" is set to Paused, the Details tab can show processes that are no longer running. If this is the case, and you attempt to "End Process" on such a nonexistent process, you'll get the "Access Denied" error. The (short-term) solution* is to ensure that the "Update Speed" is set to something else, like Normal, before attempting to end a process.

*As for the long-term solution of preventing the "Update Speed" setting from switching to Paused in the first place (which happens constantly)... I'm still searching for that one!

Not the answer you're looking for? Browse other questions tagged windows-10 task-manager or ask your own question.

30
"Access denied" when trying to end a process on Windows 8
20
How to kill a task that is "lacking an instance"?
1
How do installers bypass permissions on Windows 10