How to disable GtkFileChooserDialog search?

If I want to open or save a file in an gtk3 app (eg firefox) I get an unwanted search function after tiping a character.

New and unwanted behaviour: typing d starts a search process and gives me /home/myuser/Downloads/somestuff/DETLEFF or some other file somewhere in the system. 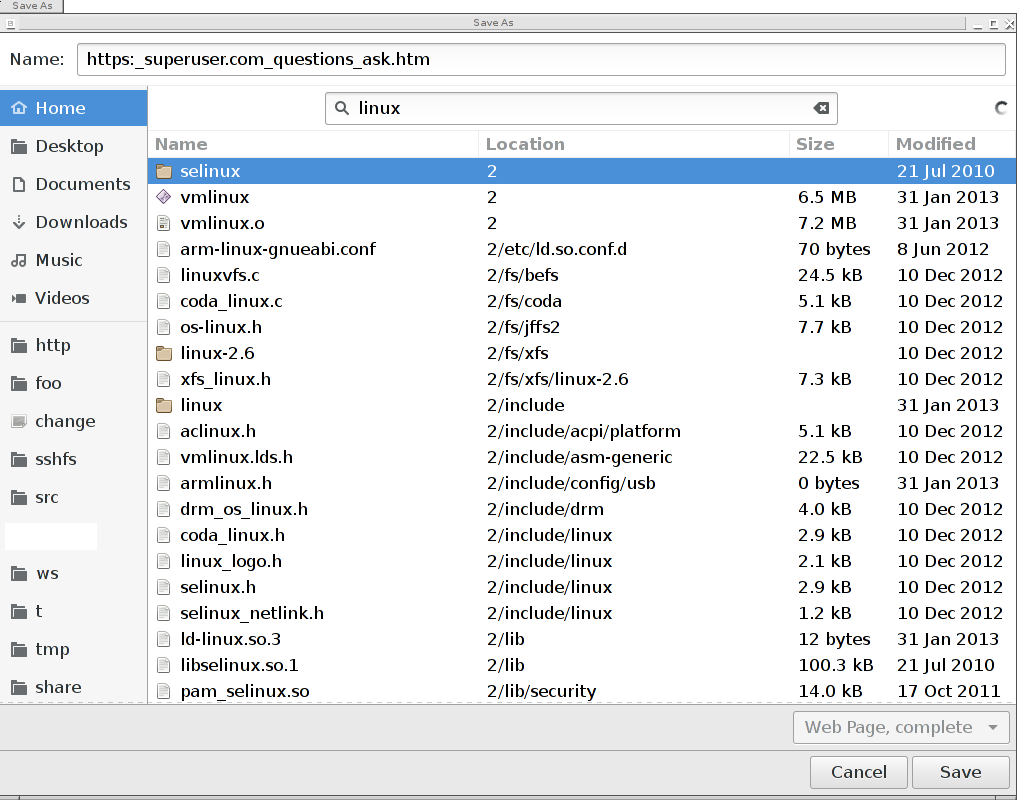 How can I change back to the old and productive behaviour?

The feature you are looking for is called "typeahead" and it is disabled in GtkFileChooserDialog. gtk3-typeahead from the AUR restores the previous behavior.

The package author says disabling typeahead is hardcoded in GTK+ and in a bug report it was stated: "It's not a bug; the removal of the type-ahead search was very much intentional."

Note there is now some (partially broken) tab-completion in the name/address field mimicking the behavior of the shell.

As of 2019, I have since hopped to using Arch's AUR repository (But still on my Debian system). I've also done this on FreeBSD, now, with small (somewhat trivial) patch. This is NOT a "switch to Arch" answer.

It was a bit hard to set up at first, but the gist of it is that you can in fact compile Arch's makepkg program and use it to compile AUR repositories on Debian. I did this like so (though I may have forgotten some dependencies):

My old answer is still present after the separator near the bottom.

2) Preparation to compile the GTK3 sources:

Now, to build and install gtk3-typeahead. To get all the (debian) build dependencies, which more or less are the same as the Arch ones, you must first have a deb-src line in your sources.list so that apt-get build-dep will successfully fetch the necessary -dev packages.

My sources.list contains the following line to do that. Change the line based on your release and nearest server.

Then, you can run the following to build gtk3-typeahead:

After doing this, the binaries will be packed up in a .tar.gz archive one level above the git tree. In my example, this would be the into directory.

This is highly scriptable, and a bit less finnicky than dealing with my old scripts in my humble opinion. It also no longer depends on debian.

It's been a year and this still annoys me, since the GTK3 folks decided to hardcode this behaviour in, with no way to revert it without recompiling.

However, typeahead was patched back in to gtk3 as distributed in Ubuntu.

Ubuntu also made the file chooser require a doubleclick to choose a file, instead of only requiring a single click if the file was already selected. If you are OK with patching the gtk3 source code, I have made a patch which works as of gtk+ 3.22.7 combining the ubuntu patches and updating them to a more current version of GTK.

Additionally, I made a script for my debian system which automatically downloads the source for the latest version in the package manager, patches it, and compiles it. Runs correctly on Debian Sid, and should work fine for other Debian distros, too.

On Debian unstable, you can get the typeahead functionality by pressing ctrl-l when the window is open (l for lookahead), but only for file open dialogues, not file save dialogues. For file save dialogues, ctrl-l will only highlight the name of the file to be saved. To navigate in a more intelligent way, you can type ~, /,. in the correct combinations to get your home directory, current directory, or a directory path from root. Also hitting the back arrow key can deselect the name and keep the cursor in the box so you don't loose the current name (as would occur in a "Save As" operation).

It seems to be that the old behavior was much better :)

For Debian: the following short script creates and installs a (patched) regular debian-package which may be preferred over make install. The patch is taken from here with the first block removed as it is reported to cause problems. I successfully tested it on Debian 10 Buster.

while this answer does not get you back the exact old behavior, it solves the main problem which is having to either do a recursive search or use the mouse.

I found out by looking into the code in gtkfilechooserwidget.c that if you start typing a path that contains a slash it shows you an interactive file list to choose from with autocomplete (just like emacs ivy) and with recursive search disabled.

Not the answer you're looking for? Browse other questions tagged linux firefox arch-linux gtk or ask your own question.

2
mysqld won't start on another system (nor on the old) - no log files available
5
How do I add a file to Firefox's hidden list of trusted files?
0
How do I fix a strange browser issue in Windows 8, where only Chrome works?
4
Java Swing apps steal/don't release focus in KDE
9
Firefox cannot save files (most of the time), how to solve?
2
Can I retrieve Firefox localStorage data for a URL that no longer exists?