How to run a js file from windows terminal?

In order to have the measurements displayed of a photocell linked to an Arduino on the terminal, Iam trying to execute a node.js server. It's from a tutorial made by Adil Moujahid

from you terminal go to the folder where server1.js is saved, and execute node server1.js.

Yet, I was advised by this answer (the second one) not to use Node.js but rather the CMD terminal.

So despite of my lack ok knowledge of the commands of this terminal (I learned Linux) I went to this terminal, went to the directory where server1.js is(C:\Users\Antoine\Documents\Arduino\Connected Objects\sketch_jan30a) with cd and did:

Which didn't work so I tried

Wich didn't work and sent me a windows Script error: 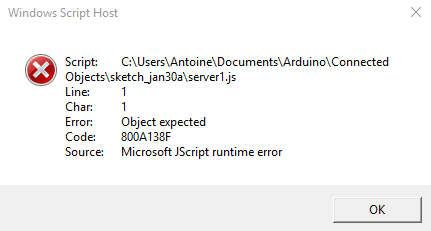 So I thought something was wrong with server1.js code:

Is there something wrong with portname? It's my best guess from what's written by the tutorial made by Adil Moujahid and from what is written on the message.

Can you help me either to write execute the .js file or tell me if something's wrong in my code (in this case I will try to move this question to a more appropirate forum)

The answer to your other question told you to run NPM commands outside of the node.js terminal. npm is a keyword that tells the command prompt to use a particular application to process the commands or arguments. In your case you're trying to run a js server written for node.js so rather than using npm install ... you would use probably use node server1.js (if you're trying to run it outside of the node.js terminal window, after cd'ing to the appropriate directory)

Sorry, just saw this question is old. Hopefully you got it by now and this post will help someone else just learning.

The code is fine, but it was written for a different runtime. WScript is very different from node.js (just like both are different from the "usual" web-browser environment) – for example, it does not support require() nor console. (Technically it's not even JavaScript but JScript.)

Not the answer you're looking for? Browse other questions tagged command-line terminal javascript node.js or ask your own question.

14
Run Linux terminal on Windows
0
Can i run remotely Windows commands form Mac terminal?
2
Is it possible to change the color scheme of the Windows terminal?
1
How to run nodejs script from windows file explorer?
13
How to run VLC command in mac terminal
2
Can I run two ongoing programs in one terminal?
1
Run pip from Ubuntu terminal on Windows
0
How do I hide the windows terminal from a cmd file