Got shocked by a native dell laptop charger outputting 19.5 V 6.5 A DC. It was REALLY uncomfortable, but was that dangerous?

My laptop was running out of battery. I grabbed my charger (outputting 19.5 V 6.5 A DC) which was plugged into the wall, and as I touched the end of the charger I got some electric shock going through my body to my other hand which was resting on the PC.

And I'm basically freaking out now. It felt far from good, but honestly I don't know if it is placebo (I'm kind of scared of electrical shocks).

So... How dangerous was this?

It's unlikely it was a placebo, if you felt it well enough to be able to say things like the path it took through your body. I certainly don't wish to worsen your fears (though honestly, a little more fear or respect concerning electricity is probably a good thing, it's easy to become complacent, I could probably stand to use more caution at times myself), but the shock was probably real.

The grounding where you are plugging in the laptop is bad. That's the third prong on the outlet. Either you're using a 'cheater' plug to circumvent the ground and plug a 3 prong plug into a 2 prong outlet, or that outlet (or your house/building) is incorrectly wired and either the ground isn't connected at that outlet, or worse, it's mis-wired as live.

9.5V (or, more likely, 19.5V, which I think is what you meant to type) would not be sufficient to be felt so strongly. Plus, if you're touching the DC prong, then it's not connected to the laptop, and all shocks require a circuit, or a loop, and there is no loop or return connection if the adapter is unplugged. No, this is a problem with the outlet or wiring in your house, unfortunately.

I would advise not using that outlet, or better, maybe that entire circuit, again until you can have an electrician or other qualified person check it for proper wiring. I have had this exact thing happen to me. In fact, at one point, I had a laptop with a metal case that experienced a fault where the outside casing become tied to live, which normally would throw the breaker, but the outlet wasn't grounded, so instead I kept getting shocks (I was standing barefoot on concrete, which is actually rather conductive and usually grounded to some degree in houses).

You're sure it wasn't just a static discharge? Like you get from shuffling across the floor in wool socks and touching someone's ear (if you're a joker like me). Was it continuous, or just a pop and over, even though you were still touching the adapter and laptop? If it isn't a continuous thing, and just happened once, it was almost certainly just static discharge. The outside prong will be tied to the outlet ground for safety, providing a terrific path for static electricity built up on, say, a plastic laptop, to discharge. These discharges are a fact of life, but also harmless. They are many thousands of volts, so will happily discharge through the relatively low impedance of your body, and other times, it can be YOU discharging, as you are the thing that has built up static charge. If it was that, do not worry. It wasn't anything to do with the charger or your laptop, so much as your laptop can build up a static charge like any other object, and you happened to be the path to ground for the discharge.

If you want to avoid this, grounding metal desks, or even yourself with a grounding strap, will prevent these build ups, but it's also kind of inconvenient. And again, they really are harmless.

BUT, if it is not static in nature and something that will happen for as long as you're in contact, then it is definitely a grounding problem. Where do you live? Or what voltage is your power grid there? If you're in the US, this is significantly less dangerous than if you're in a country with 230VAC+. Let me know, I'll update my answer.

More importantly, did it cause any involuntary muscle contractions? This is what can make a shock dangerous, but if there was no noticeable contractions, there is too much impedance for a dangerous amount of current to flow.

It's quite common on switching power supplies that may look like they use the earth prong (but actually don't) to use EMC filter capacitors from the DC output side to the rectifed AC on the power input connections. The capacitors are normally about 1nF in size and you can get a tingle doing what you did but it won't kill you: - 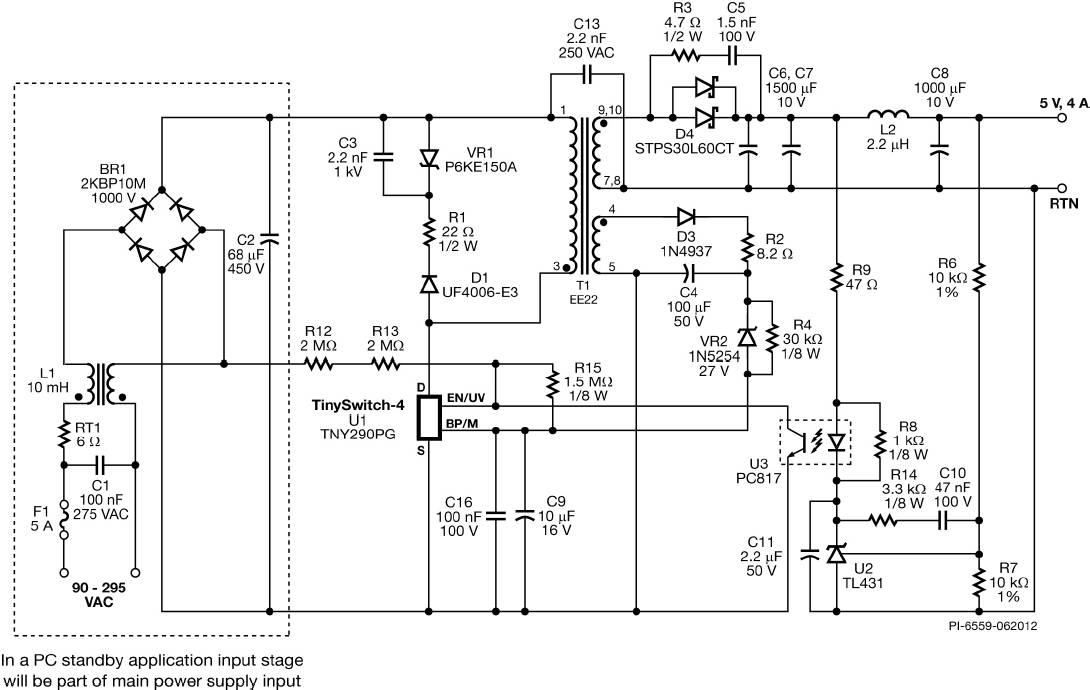 There are screw drivers for electricians with a discharge light inside for checking for live voltage. Check your power supply (be sure not to shorten it, just touch the laptop-side plug on the outside) with it while plugged into the wall.

Do the same with your PC. If both have three-pin power plugs, either one of the powerr supplies or its cables is malwired, or, unfortunately almost more likely, your power socket is. Check out the earth contact with your screw driver. That will tell you whether it is malwired (the worst case). Another possibility is that it's not wired at all (or the wire came off): that's harder to check and more like an electrician's job. But you can cross-check with other power sockets (assuming that there is at least one sane one).

Note that the power sockets usually have two orientations. Results may differ depending on how you plug in your plug. So for comparing results from one socket to another, try both orientations on either socket.

If it's the socket, complain to your landlord. This is a life-threatening building fault.

Well, you're not injured, so you're going to be fine. You didn't get shocked by the 19.5V/6.5A, you got shocked because you were probably charged up to a few kV by static electricity (this is common in the winter, when humidity is lower, and you often wear wool socks) and then this energy jumped from your finger to a "ground" on the charger. I put "ground" in quotes, because it was likely not a real ground, but still able to absorb the static shock.

I don't know if there have been any reliable studies of the chronic effects of static electricity on the human body. I can tell you (having played around with ESD test equipment) that human body model shocks over 20kV are rather painful, but seem to have absolutely no lasting effects. Obviously, sustained shocks at these voltages are a completely different story.

7
Electric shocks from tip of laptop charger and laptop case - how to safely test if it's a bad charger or a bad outlet?