Google Search hijacked only when not being observed. Attaching a debugger returns normal results

I cannot figure this one out. I noticed my search results were a little "different" as of late.

I decided to check developer tools and noticed there was a SyntaxError in the page, I clicked it and it actually leads to a javascript function that replaces the google web address.

The problem seems to only occur in Chrome, here is a side-by-side with firefox:

I tried to attach Fiddler Web Debugger to capture traffic so I could see where I am being redirect to. But as soon as I attach a web debugger it all goes away and I'm served the actual search page.... The page source when Fiddler is capturing is completely different.

Below is a screen capture gifv showing it. It starts with the hijacked page and I circle my cursor around some sketchy additional javascript source files. I then tell Fiddler to capture traffic and refresh my search results. The page I'm served is completely different. Finally I disable traffic capture again and refresh the page to show the hijacked page and take you to the function with the syntax error that is supposed to replace the web address.

I ran Malwarebytes and got no results. Spybot came up with a few hits but removing them did not fix the issue. I've also completely reset chrome using Googles provided tool. If I use a different web profile, such as the one I do my bills in, I get no search results. If I enable fiddler, suddenly I get results.

Some malware was probably impersonating Fiddler, as the original developer of Fiddler, Eric Lawrence, pointed out:

Various pieces of malware check whether Fiddler is in use, and if so, they stop doing their malicious activities in order to attempt to hide their actions.

Fiddler is a web debugging tool. It has no malicious behavior whatsoever, and it is never installed unless you personally install it using the installer downloaded from Telerik. The scenario described here is a piece of malware which is attempting to avoid detection by making itself look like Fiddler.

The clearest sign of malware is that Google Chrome doesn't load HTTPS websites as intended unless you are using Fiddler to capture traffic. Fiddler is not designed to interfere with your normal web browsing when it isn't in use.

In order for the malware to hide itself, it needs to hijack the Fiddler proxy and resign HTTPS traffic with the Fiddler certificate's private key. It is trivial to change the proxy settings, and it is possible to obtain a copy of your Fiddler installation's private key.

You had Fiddler install a root certificate on your computer, which allows it to insert itself as a man-in-the-middle (MitM) to monitor the data contents being sent over HTTPS: 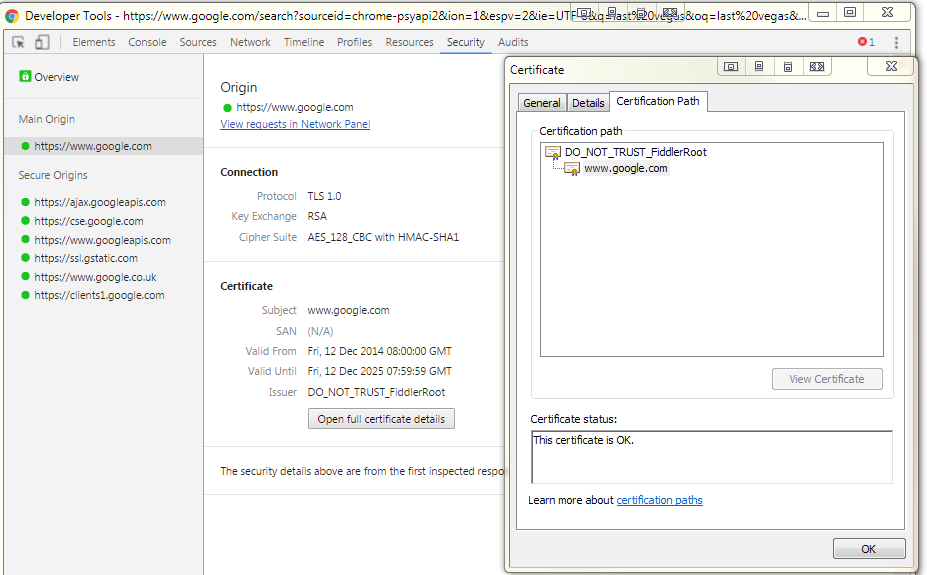 In contrast, here's how https://www.google.com/ is normally trusted: 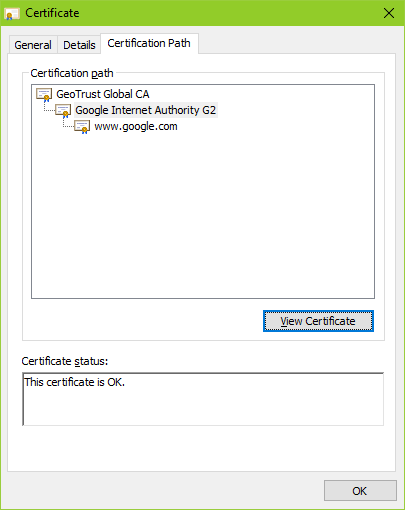 Your computer trusts the DO_NOT_TRUST_FiddlerRoot certificate because it was installed to your operating system's certificate trust store.

Going through Fiddler's operating system-level proxy, Fiddler can now be the MitM to capture unencrypted HTTPS data while still serving the site. Fiddler fetches some web page, then signs it as "www.google.com" using the certificate that was trusted earlier, DO_NOT_TRUST_FiddlerRoot.

Under these circumstances, malware can take over both the proxy and the certificate to feed you the wrong site while still showing you the

. I can see this leading to elaborate phishing attacks.

As Eric Lawrence once wrote,

That's why Fiddler warns about the security implications of intercepting HTTPS traffic:

By user error or malware installation, Fiddler has been associated with various problems:

Although Fiddler itself is not a harmful program, its misuse and misunderstandings led to past bad reputation and viruses pretending to be Fiddler.

I don't know if your computer has been compromised by some Fiddler hijacker, but you indicated that you don't have time to wipe your computer and reinstall, so hopefully the following steps can get rid of Fiddler and restore proper secure web behavior. (I would still recommend reinstalling and changing your passwords afterwards, especially if you're serious about security. You wrote that Spybot – Search & Destroy found some malware.)

The original poster discovered these additional steps to resolve his issue with Fiddler:

Also in Fiddler Settings I disabled the options allowing it to decrypt HTTPS traffic before uninstalling and re-clearing certificates.

Assuming that you normally do not use a different proxy…

As suggested previously on Super User, you should try to find and remove the original malware that displayed modified HTTPS webpages.

Detailed advice:
How can I remove malicious spyware, malware, adware, viruses, trojans or rootkits from my PC?

Not the answer you're looking for? Browse other questions tagged google-chrome fiddler hijack debugger or ask your own question.