How can I tell if my batch file is running?

I have a batch script which is run from an AT command, and may get run more than once. When it starts, I need it to detect if it already running, and if so, exit (the second one) immediately.

I've tried Get-Process and looked at the expanded StartInfo.EnvironmentVariables property, but can't see how to create an env var so that it appears in the property.

I thought about using /WAIT in the start command, then the AT will remain open until it finishes, but the script containing the AT is not minimised

I believe a lock file is the simplest reliable solution. The trick is to make sure your running batch process maintains an exclusive write lock on the file until it terminates. The beauty of this system is that Windows will release the lock no matter what reason the batch terminates.

Once you have a lock file, you need a way to detect if the file is currently locked. I describe how to do this at How to check in command-line if a given file or directory is locked (used by any process)?

I've used this primitive, yet effective, technique to accomplish some fairly sophisticated tasks with Windows batch:

You are not clear where the batch file resides - on the remote machine, or the local machine, or if you might be running the script on multiple machines simultaneously, but only one active process per machine.

If the batch script is on the remote machine, and your process has write access to the script, then you can use the batch file itself as the lock file! You simply need to call a :subroutine while redirecting an unused file handle to the batch script using append mode. The CALL will fail if another process already has a lock. The lock will be released automatically when the script terminates (regardless of how it terminates).

If your script is on a different machine than the process, but you only have the process running on one machine at a time, then I think the above will still work.

Perhaps a better alternative is to establish a dedicated lock file on each remote machine, separate from the batch script. Then you can run the process on as many remote machines as you want.

Thanks for the help. I've implemented the following:

That seems to work ok, further testing will tell.

I've created an automated plugin called CMDS you can use here: How would I see if a certain Batch File is running and get the PID? However Im not sure if this will work with XP.

It also has a gui mode for being used by itself.

Here is the help file: 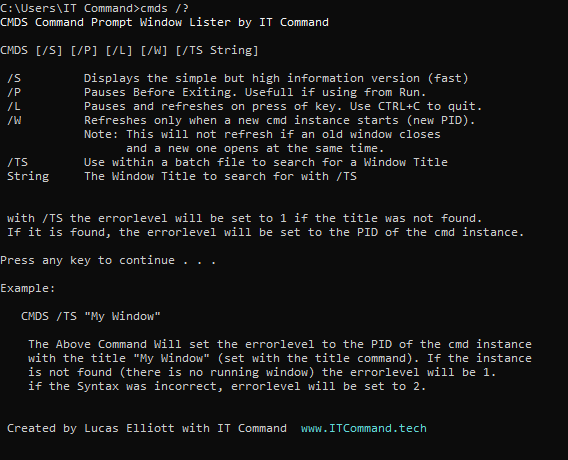 Not the answer you're looking for? Browse other questions tagged windows powershell batch-file vbscript or ask your own question.

1
How would I see if a certain Batch File is running and get the PID?