I need a standard or limited Windows 7 user to be able to run an application (Fallout Mod Manager) which requires UAC elevation. I've tried the Application Compatibilty Toolkit, but that did not work as intended. Any Suggestions? I am running Windows 7 Ultimate local, so policies can be applied.

It's doable, but not easy to explain.

There are only three reasons why an application would request for elevation on startup:

Assuming you've already checked the compatibility tab, and the application is not set to require administrator: 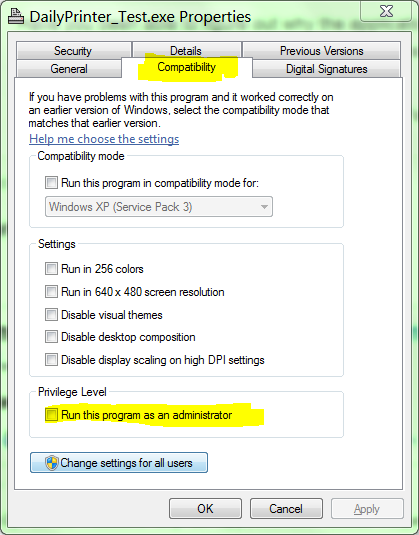 The next step is to check for an embedded resource manifest. i won't go into how you can find that out. But skip to create a manifest for yourself.

Create a file in the same directory as Fallout Mod Manager (i don't know what the exe is called, but i'll call it FalloutModManager.exe:

This new manifest file you create is a simple text file, containing xml, with a manifest entry that says that we want to launch asInvoker, rather than requireAdministrator:

Having this file next to your executable is called an "external manifest". It is also possible the executable has an embedded resource, which you would need a tool like Resource Hacker to see, or modify.

Not the answer you're looking for? Browse other questions tagged windows-7 uac elevation standard-user or ask your own question.

1
A .bat file to close two services running in background

12
How can I get the UAC/elevation prompt to remember my local username?
2
Prevent elevation (UAC) for an unsigned application
3
Run program as admin without entering credentials? (Automatic Win7 elevation)
1
Windows 7: Allow standard UAC user to install from CD
12
How to deny elevation to a program?
8
Are standard users still useful when Windows 8 has UAC?
1
Elevation: Accquiring the Admin Token in Administrator vs Standard Accounts in Windows
0
Cannot run an application without admin rights (UAC issue)