Is Microsoft Photo Viewer manipulating my digital camera photos on import from camera?

I was doing some backups of my digital photos and I noticed that some of the photos were imported from my camera twice to two different folders. That's not the issue.

The issue is I was comparing file sizes and notices some of the duplicates were smaller (4.6MB vs 5MB). I noticed the smaller ones have Microsoft Photo Viewer in the Program Name field of the Exif data, whereas the larger ones have my camera model in that field. Also, the height and width dimensions have been swapped (the image was rotated). 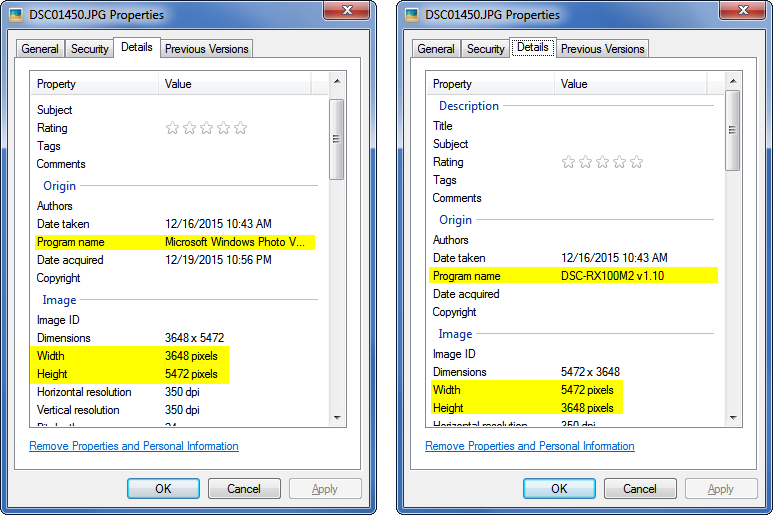 Windows adds two tags, when it's rotating photo: Software (Exif) and CreatorTool (Exif). It shows as one in Windows Explorer, tho.

Why it's manipulated? Probably Windows rotates photo according to rotation tag from the camera.

Why size has changed? It's hard to tell without file. I'd say it's thumbnail. Some cameras adds really big thumbnail to JPEG files and Windows either removes it or changes it to own. In this case photo wouldn't be touched, but metadata - precisely "photo in photo". You can look at the exiftool info (exiftool filename.jpg) and compare if metadata got changed. Look especially at info about binary data. Or you can send here two files - rotated and original - and I'll check this out.

JPEG compression - I doubt that Windows recompresses your JPEGs. In this case it probably does only lossless operations, so only metadata is changed.

I recommend getting photos by yourself, without using any tools - nor Windows, nor these from camera producer.

BTW if you want, you can remove these tags (command works recursively for all files with .jpg extension, starting from current directory):

And if everything will be fine, remove backups by using

* imagine square tiles with 8x8 px images on each of them - then rotate each one - that's what Windows does. The problem is when tiles aren't 8x8, i.e. you can't divide height or width by 8. Then Windows recompresses file.

I may have found another bug within an older version of Microsoft Photo Viewer. I encountered a string of images that were tagged in the EXIF data with "Microsoft Photo Gallery 6.0.6001.18000".

The XResolution and YResolution were incorrectly noted, either as 1/96 instead of 96/1 as it should have been, or sometimes 0/1, other times as 'infinite', which I'm not sure what it was trying to represent. I should add this is the THUMBNAIL resolution, so it might indicate MS Photo Viewer was creating the thumbnail.

This caused problems at archive.org when I attempted to make a book.

As this version of Microsoft Photo Gallery is long outdated, I presume the bug has been addressed.

I had to use the software 'EXIF Pilot' in order to correct these incorrect fields; it would have been nice to have access to EXIF fields in bulk, but a batch tool is a premium plugin with EXIF Pilot, and I don't have the paid version of Total Commander either.

These were not my files, so I am making presumptions about how the EXIF data became corrupted, but I suspect it was Microsoft Photo Viewer.

Not the answer you're looking for? Browse other questions tagged windows-7 photos exif or ask your own question.