How does my router resolve a URL like http://router.asus.com/ to its IP address?

Typically I connect to my router by its IP address of 192.168.1.1. However, I am also able to connect to it at the URL router.asus.com. My computer does not have a connection to the Internet. How does this work?

Your router has its own DNS server. When you do use it online, it'll forward to your ISP's DNS, but it's also added its own entry at router.asus.com to point to itself.

As you're likely using DHCP, it'll automatically assign your machines to use its own DNS. You could test this by changing to a manually assigned DNS server (8.8.8.8 for example), flush your DNS and then try the same URL.

Note that visiting router.asus.com with my connection takes me to a site hosted with Amazon that appears to try and scan for a compatible router on my network. 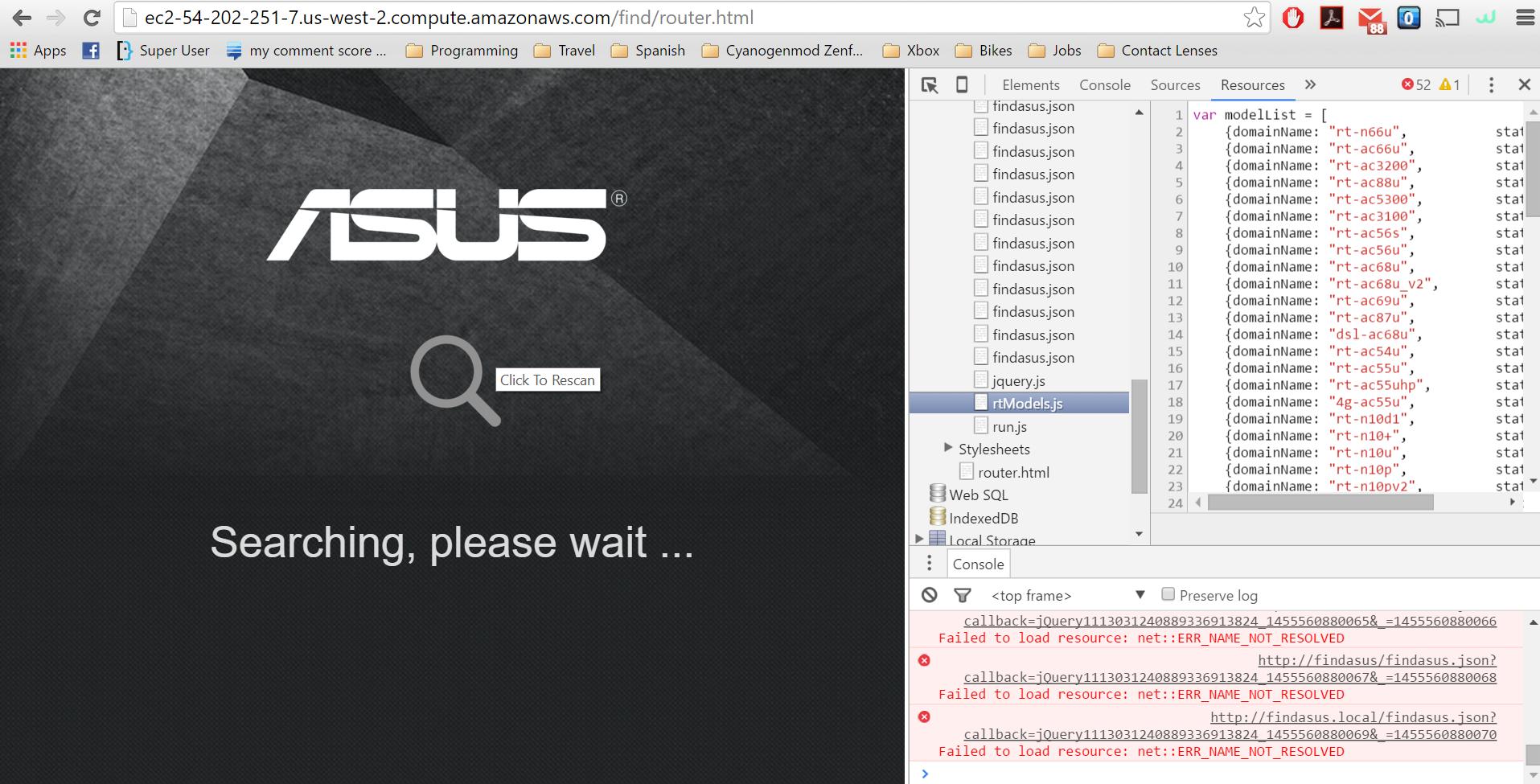 Looks like it uses the following JQuery to try and grab a specific JSON file from a Machine Name on the network:

You can see the names it tries to access in the screenshot. Literally just loops through and if it gets a hit it'll redirect to what it found.

I don't personally own an Asus router, and Jonno's answer is very good, but there's another possible way for routers to accomplish this (even if it's not used by your particular one).

Since that page isn't served over HTTPS, it's entirely possible for the router to simply intercept the HTTP request and answer it without talking it any external server. Asus routers have been known to redirect pages under some circumstances. Note that if the redirection occurs even without an Internet connection (i.e. with no external DNS), it must be caused by your router's DNS; there's no reason both couldn't be going on, though.

My Netgear home router, for instance, can block domains and keywords (serving a "blocked by Netgear firewall" page) even if I'm not using its DNS. I made sure that it's not intercepting the DNS requests; the name gets resolved correctly, but going to the page in a web browser results in the "blocked" page.

You can test this theory by setting your DNS servers to, say, Google's (8.8.8.8) and pinging the redirected domain name.

Just wanted to add to Jonnos answer that

is how my (and most likely) your router do this. Your router is probably running asuswrt with dnsmasq. You can have shell access (at least via telnet) and look for yourself.

Not the answer you're looking for? Browse other questions tagged router dns ip or ask your own question.

5
Asus RT N16 router. Prevent redirection when there is no internet connection

0
Why does my Netgear WNR 1000 router keep giving the wrong IP address?
15
How to find IP address of router connected to another router?
1
Find router IP address and access router configuration
0
DNS on router - unable to resolve address
44
How does a router obtain its IP address?
0
What does ISP modem internal network topology look like to be able to access its managment IP Address when bridged and not bridged?
1
How does a router know that it should receive the packet, if the packet was sent to a public IP address?