What are the consequences of disabling HID-compliant devices?

I'm attempting to improve the frame-rate for a PC game called Condemned. My machine exceeds the recommended requirements described back in 2006. The machine is, however, running Windows 10.

Many forums are recommending that I disable "HID-Compliant Devices":

To get the best performance, you are going to want to disable all "HID-Compliant Device", you should not need to disable ANYTHING else.

I can't find any reasoning behind this method.

Inspecting the Properties of these devices via Device Manager doesn't tell me much about them. There are three types of HID-compliant devices on my machine:

I have no idea what functionality is provided through these. I'm worried that I'll disable my keyboard or mouse if I disable these entries.

Update: Condemned will randomly have dramatically sharp drops in fps. Dropping from ~180 to 8. Unplugging the keyboard and mouse seems to restore the normal frame-rate.

Also, all but one of the HID-Compliant devices vanish once I disconnect them from my KVM:

Switching from my computer to another via the KVM's switches makes for a quick remedy.

I haven't tried this myself. However from reading forums, this is a very common recommendation, and does apparently make a big difference. Apparently it shouldn't actually stop the devices from working, but may reduce some additional functionality.

after some investigation I found Under Human Interface Devices in device manager a HID-compliant device was the culprit. I went one by one disable and re-enable until i found the one that was the issue. Once i did i left it disabled.

I did the same in order to play the game 'Fear'. However, i lost no additional functionality of the multimedia buttons of my keyboard, or mouse, or my Speakers. This is the only features it disables. Make sure to only disable the 'HID-compliant device' devices. No other HID devices.

Btw, if it still doesn't work for you disable the in-game Vsync. You can instead select the fast sync option from the Nvidia Profile Inspector application after you select the app / game you want and then setting the VSync option to FastSync.

I have found disabling HID does indeed allow FEAR and games that seem to be sensitive to POLLING of HID devices to run well.

Oddly, my keyboard, mouse and sound ALL function 100% normally with the HID devices disabled. I rebooted to see if maybe a re-set is needed, but no, everything works the "same" as I use the PC after a re boot.

If I ENABLE the HID devices, FEAR FPS collapses to unplayable. SO I've kept them disabled while I play this game, and re-enable them later on when I'm finished.

My experience suggests that disabling HID devices to trouble shoot an odd older game MIGHT be a solution to more consistent FPS elsewhere, and that mouse / keyboard function, at least on my ASRock X470 Taichi W10 system, still work fine.

Report of the HID device POLLING frequency slowly bringing FPS down in certain older games seem to be the "answer". Stopping the polling by disabling the device drivers fixes it...I'm told. But, it works. 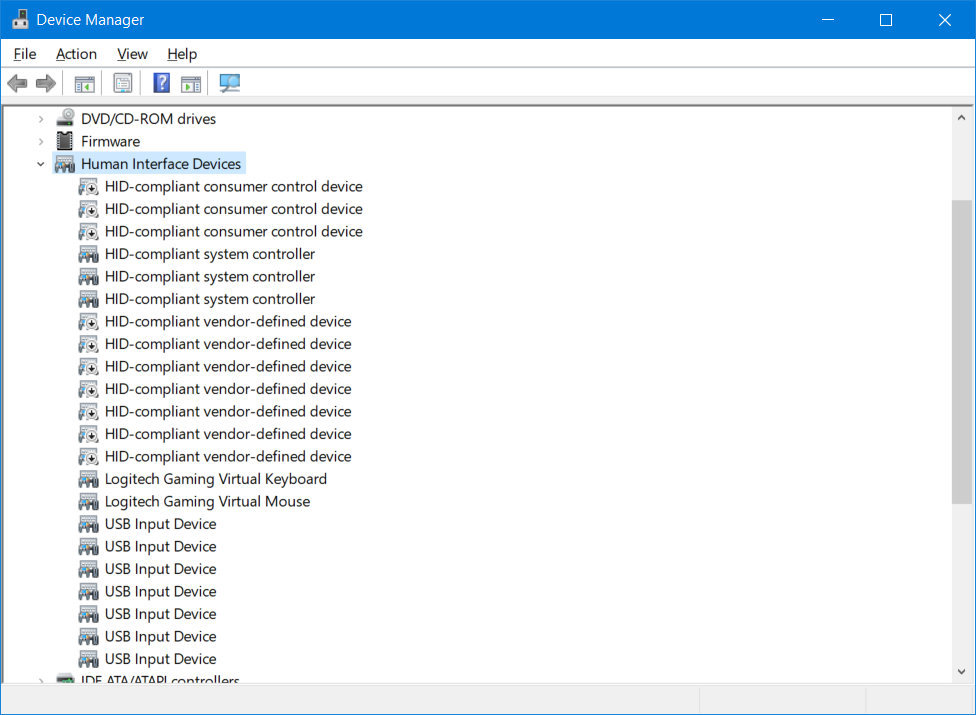 I was recently having issues with long loading times for Minecraft Forge (a modded Minecraft instance) and apparently LWJGL (Light Weight Java Games Library) was hanging on this exact same issue, up to 40 seconds(!!). Disabling the HID-compliant devices has bizarrely changed none of my functionality for any of my peripherals, yet has made loading near-instantaneous.

I guess from that you can tell that HID Compliant Devices are most likely going to be some input devices or others you have connected to your computer. Disabling them all would probably lead your HID's to stop working, because you know... you disabled them. Are you sure this wasn't just some troll post that recommended you to do this?

Judging by the setup in device manager, I imagine "HID Compliant Device" is some sort of slot, so basically if you plug in another HID one of these slots will be filled to activate that device. It could also be left-over generic HID drivers for devices you have once upon a time plugged into your computer but are not currently plugged in (for faster hot-plugging). This could also actually be active drivers for your current devices or some of their components, I don't know because information about this on the internet seems lacking. But either way, I don't see why this would have any positive effects for anything. Definitely sounds like a shady deal to me, but please tell me how it goes if you try. Worst case, your Keyboard and mouse will stop working, what do you have to lose?

Not the answer you're looking for? Browse other questions tagged windows-10 hid or ask your own question.