Difference between data and text?

This might sound like a very silly question to you all and in fact it is, but, I really got myself confused figuring out exact difference between data and text.

I will put my observation, suppose we have 2 files, text.txt and data.png. As you might have already guessed, the former one is a simple text file which contains text, it can be opened by a simple text editor and it's contents are what we call text, right?

Now, the latter one is a picture, whose contents are called as Data, right? But, although it's an image and when you would open it, it would display an image on your computer but, if you change it's extension to something like .txt or to say, if you open it up with a text editor like notepad(with utf-8 encoding), we see text, but extremely obscured. But this atleast proves that an image file also contains text, then what's data? where's data? Is that text data? In computer terms, how would I distinguish between text and data?

Yet another observation that I would like to share, I was practicing steganography and I was successful in adding some text at the end of the image file and it didn't even corrupt it! So, the text that I added wasn't data?

PS : I don't know what tag to select for such a question.

Firstly, both forms are 'data' in a sense, and getting down to basics, these are both stored in exactly the same way at the base level, in a binary format. Whether it's text, numerical, executable, anything, it is all stored in binary, a combination of 0's and 1's, on the storage medium you are using.

So, why does what you refer to as text display the way it does?

All text is stored again, as a combination of 0 or 1. But that in itself is fairly useless to an end user who wants to see the value stored on the drive. This is where character encoding comes in to play.

You may have heard of some different types of character encoding before, such as ASCII and UTF. These are used to map stored binary to a character you recognise (which will then be displayed using a certain font, but that's slightly outside of this scope). 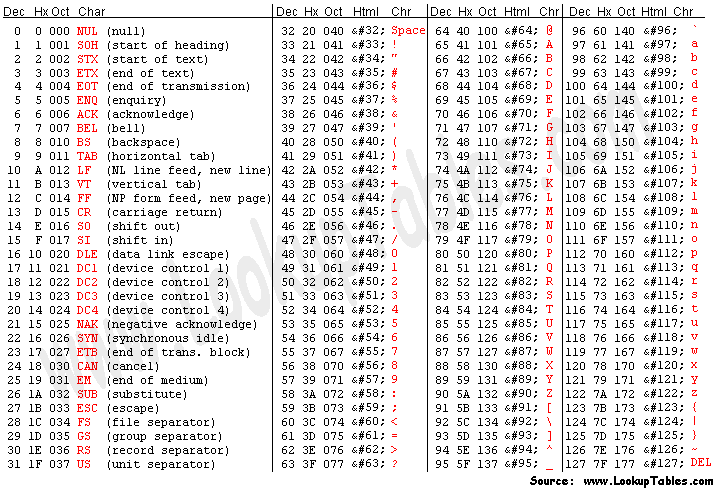 Each character, that is, uppercase, lowercase, symbol and "special characters", are intepreted by a certain value. Using Hello as an example:

Other character maps will use all 8 bits, or even more than 1 byte, to store a character, allowing for larger alphabets or multiple alphabets and more symbols to be stored in the same file, using the same encoding.

So we can see how binary can now be converted into what we consider "text".

But what happens when you open another file type, not considered text?

Every file on your machine, being stored as binary, can be opened by a text editor which will attempt to read the file a form of encoding. Of course, what is displayed will be absolute gibberish, as the file wasn't encoded to be read by a character map, but instead to be executed in a different way. A lot of the bytes will coincidentally match a character from the map it is using, which will occasionally mean you see the odd character you recognise. The rest either won't be mapped, and return an odd or missing character, or will match different parts of the map which makes no sense to decode into. There's nothing stopping it trying though.

I edited the data for a PNG file, but it still opened and didn't corrupt. Why?

Looking here you can see the structure of a PNG file. Specifically:

Chunks can appear in any order, subject to the restrictions placed on each chunk type. (One notable restriction is that IHDR must appear first and IEND must appear last; thus the IEND chunk serves as an end-of-file marker.) Multiple chunks of the same type can appear, but only if specifically permitted for that type.

This particular file type provides an end-of-file marker, which will tell the reader that the data beyond this point is not part of the file make up itself. As such, you could add data beyond this and it may not cause a problem if the reader is handling the file correctly. That said, if you add another EoF marker it could cause confusion.

Another thing to note is that the file type is made of chunks, each with a CRC check. The CRC check tells the reader if the chunk is valid and hasn't been altered, and should always be present. The reader may be trained to disregard data not including a valid data chunk and CRC combination, although I would suspect this to throw an error of some form.

An image file doesn’t contain text (except for some metadata perhaps). Instead, you need to look at it the other way around: text is also data. Text is a specific way to decode binary 1s and 0s. An image viewer would use yet another decoder to make sense of the raw data.

If you try to force the text decoding on a file that doesn’t contain text, the results will be garbled, as you already found out.

Depending on the file format, trailing garbage data may be ignored. That isn’t steganography, however, because the additional data isn’t hidden. Steganography would be to change some of the pixels slightly to encode the data.

In information technology, text is a human-readable sequence of characters and the words they form that can be encoded into computer-readable formats such as ASCII or UTF-8. Text is usually distinguished from non-character encoded data, such as graphic images in the form of bitmaps and program code, which is sometimes referred to as being in "binary" (but is actually in its own computer-readable format).

Source: What is text?

It's not really the data of the image you see, it's the coding of the image which now happens to be text-like. It does not have to be, just look into a jpg for example. Basically, the difference of a text-like and a binary (you called it data) representation of information is that you don't use all possible byte values (8-byte "characters") but a subset of them which you usually write with. In other words, in texts less symbols are used. As a result, text-like files have to be bigger than binary files with the same information content that is the same amount of information requires more instances of that less amount of symbols.

I recommend installing some hexa viewer (total commander and far manager are both capable) and just looking into files and it will become clearer soon.

Data: Means facts collected together for some reference.

Text: Simply the combination of letters or Characters.

Not the answer you're looking for? Browse other questions tagged text-editing or ask your own question.

13
Is it possible to view two files simultaneously in Geany?
0
Process plain text data
2
Delete until character is found
0
Simplest way to erase and replace content of multiples text files
0
Arabic/Urdu text scrambled
3
Looking to create a batch file capable of editing a line (or word) in a text file
2
Is there any way to reverse text and *character* direction in a pure text document?
0
Import set of text files to a set of columns