Microsoft update (MSU) does not find updates for other Microsoft products (e.g. Office) after MSU update

This post relates to an earlier thread of mine to fix a problem with Microsoft Update (MSU) during which I had to re-install MSU under Windows 7, 64bit, SP1. I installed this Microsoft update to fix the problem.

However, in the process of fixing the problem I had also unchecked the setting "install updates for other Microsoft products" in the MSU setting, as is shown below in highlighted yellow [unfortunately in German, but the idea should be clear]. This screenshot is from the Office online help where it explains that the checkbox should be checked to find Office updates. 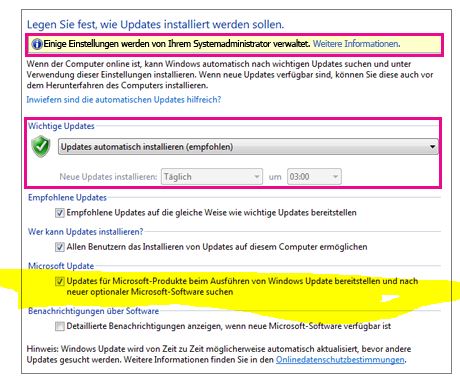 However, I unchecked the box before installing the MSU update as an attempt to solve my original problem. I planned to check it again later. 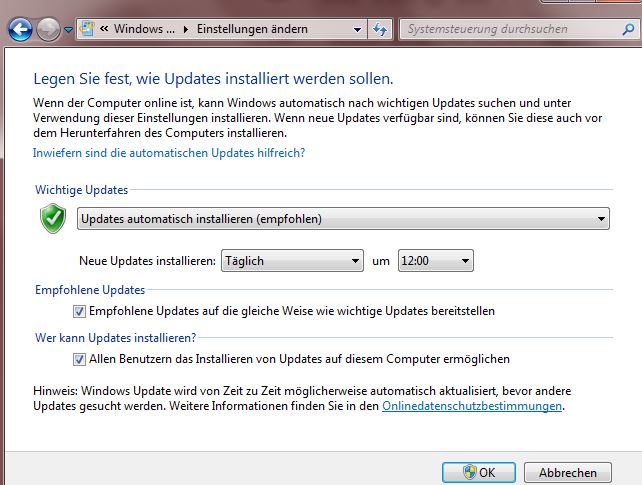 On the start page of MS update it can be seen that it only searches for Windows updates. See screenshot, first yellow highlight from top. [In German: "You receive updates for: Windows only"]

In the row below [second highlight from top] it says "Receive other updates for Microsoft products" and the link points to this somewhat oldish strange site at Microsoft, relating to Vista (!): http://www.update.microsoft.com/windowsupdate/v6/thanks.aspx?ln=de&&thankspage=5

This all looks very strange to me. Could it be that this is a bug in the MSU update from November 2015?

I would be glad to get your help on this!

Edit: I found an old thread which discusses that when the link is opened in IE11 with compatibility view then it offers to install MS Update. Should I do this? it seems starnge to me given I just installed an MSU update dating Nov 2015? See screenshot. Plus this seems to be a VISTA help page. 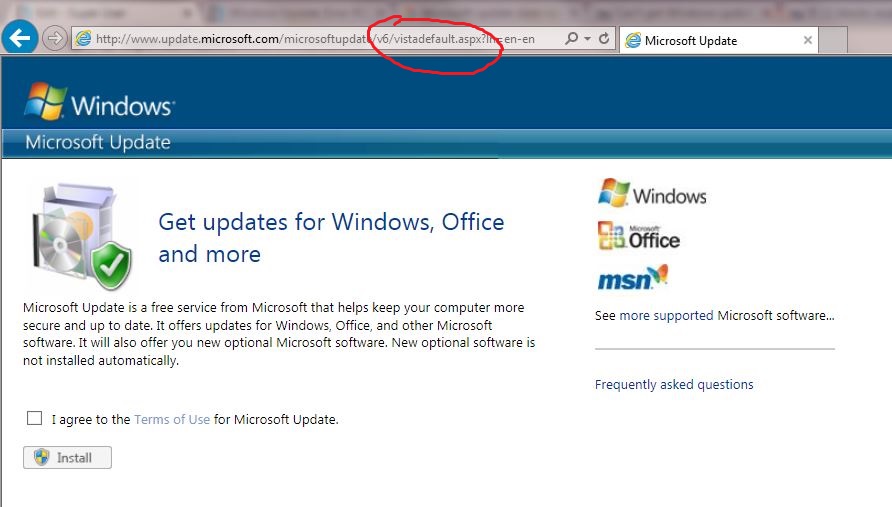 I found an answer to my own question. I am running Office 2010 ("version 14.x"). To enable updates again proceed as follows:

The key in step 4 might have slightly different names across office versions. In my source the key was called ShownOptIn under office version 12.

Following these steps also MSU shows the missing checkbox again and it finds all updates including updates for non-office products (e.g. Silverlight)

It seems that when the Microsoft update servers are under heavy load, e.g. Patch Tuesday or shortly after, searching at the same time for updates for both Windows and MS products (such as Office), can cause various error situations to arise. Unlinking the search for MS Products, so that it only looks for Windows updates, then has a higher likelihood to succeed. It is only unfortunate that Microsoft has made it so difficult to reinstate the search for updates to its products.

An alternative to the Regedit, is simply by adding microsoft.com to Internet Explorer 11 Compatibility View list. I found this solution in the comments at the bottom here: https://iowacitytechnologyservices.com/2015/10/12/windows-updates-microsoft-products/

Not the answer you're looking for? Browse other questions tagged windows-7 microsoft-office windows-update updates debug or ask your own question.

2
Windows Updates settings issue?
24
Can't turn on Microsoft update in Windows 7 x86
42
Attempting to Install MSU hotfixes results in “Searching for updates on this computer…” to last forever
3
Windows Update Error 80244019 after long time searching for updates
1
cannot switch on the microsoft update?
15
How to make “Give me updates for other Microsoft products” enabled again?
1
Windows could not search for new updates - Error Code 8024402F / 80072EFE
5
How to disable notification about updates on startup in KDE 5?
0
How to install Windows 8.1 update KB3033055 after installing all available updates available to date?
8
Turn off Microsoft Apps auto update on a Mac