I have 3 virtual desktops in Windows 10.
On one of those desktop I run mstsc fullscreen.

To switch desktop I can use windows+ctrl+left or right.
But when I am in a fullscreen mstsc this key is captured by mstsc and switching doesn't work.
Is there a way to change this behaviour?

I was looking for a solution to this problem and just found one !

CTRL + ALT + HOME gives keyboard focus back to host when in Remote Desktop.
Then you can do WIN + CTRL + LEFT or RIGHT to switch between virtual desktops.
Not ideal, but i'll probably have autohotkey deal with these 2 shortcuts.

It turns out that in remote desktop client, you should select "Only this computer" when it comes to applying Windows Key Combination. 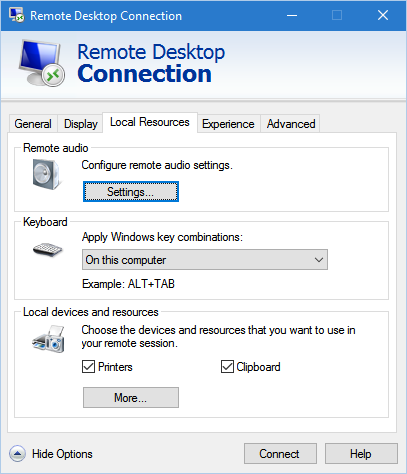 First, I wanted the Windows keys to work on the remote computer (Alt-Tab for instance), so I have "Only when using the full screen" for the "Apply Windows key combinaisons" setting.

Then, since very few key combinaisons are able to get you out of the remote desktop when it is full screen, you have to use CTRL-ALT-HOME, which brings the connection bar, but also gives back the control to the local computer.

So I wrote this autohotkey script : switchVirtualDesktopWithRD.ahk. It is completely based on this script, so I take no credit. I simply modified it for my needs. You can ajust it to yours...

In my case, I only have two virtual desktops : the first is the main one, and the second is where I run a full screen remote desktop client.

What the script does when I press CTRL-ALT-HOME :

In other words, I always use CTRL-ALT-HOME to switch between desktops.

If you have a touchpad, you can try the four finger gesture.

I am working with two virtual desktops in Windows 10. On one of those desktop I am accessing a Win 7 through Remote Desktop in full screen mode.

I can switch between the two virtual desktops with this single gesture. It works for me.

As we want the regular shortcut key to work on the remote computer, you must have "Only when using the full screen" for the "Apply Windows key combinaitons" setting when starting the RDP session.

I actually based my script off another script I found on the AHK forums.

Note: it gets a little buggy when using two or more virtual-remote desktops (eg. one local virtual desktop, two virtual desktops with a fullscreen RDP window on each) but I don't have time to work on it any more right now. The issue is when you switch from one virtual-remote desktop to another, you have to unbind and rebind the hot key and it's having trouble detecting this (though it shouldn't - the RDP title bar has a different window class but it doesn't always pick this up).

electrotype's answer did technically work for me, however I have two qualms with it.

It took a while, but after a lot of close examination (I'm not an AHK expert), I was able to reverse engineer the behavior out of the heavily-abstracted script. For the purposes of this question, the entire 672 lines can effectively be replaced with only 4:

The only functional difference is that the original script hooks into the Windows virtual desktop framework in order to determine which local virtual desktop (VD) you are currently on (in electrotype's and my case, that's either VD 1 or VD 2). So when you're in a full-screen Remote Desktop (RD) session, pressing Ctrl+Alt+Home first brings up the RD title bar (that's just default RD behavior, and forces RD to release control of your inputs), and pressing Ctrl+Alt+Home again triggers AHK (now that the local system has focus) to Send either Ctrl+Win+← or Ctrl+Win+→, depending on which desktop you're on.

If, as in my case, you always keep your full-screen remote session on VD 2, then the above 4 lines will accomplish the same thing, except that you no longer have the option of using Ctrl+Alt+Home to switch back from VD 1 to VD 2. But you can just use Ctrl+Win+→ to do that normally. Using the same (wrong) keystroke to go from VD 1 to VD 2 is not worth the extra 668 lines of code IMO.

So that solves qualm #1.

Unfortunately qualm #2 is more complicated, and even the over-engineered script from electrotype's answer doesn't (and can't) solve it. The problem is that the RD session seems to capture all key combinations until such time as you have used Ctrl+Alt+Home to escape out of the RD session, so that key combo must be pressed first. That is of course unless you change the RD "Apply Windows key combinations" setting to "On this computer", but one of the core premises of this question (for most of us here), is how to achieve the desired result without changing this setting, since doing so breaks functionality such as Alt+Tab in the RD session.

I've seen some other questions/answers suggesting it's possible via different complicated scripting mechanisms, or combinations of local plus remote AHK scripts, but those are outside the scope of this answer. I hope to find one that works at some point.

At any rate, if you just wanted the functionality of Ctrl+Alt+Home (twice) to switch your desktop, away from a full-screen RD session, in a much more understandable script, then here's your answer. Since it's only 4 lines, it's at least much easier to customize which VD you want to switch to.

P.S. As an aside, I will also just note that, in my quest to make Ctrl+Win+arrow capturable out of a full-screen RD session I came across many posts claiming that reloading or suspending and un-suspending the AHK script after the RD session is full-screened will allow defined Hotkeys to function, even when the full-screen RD session has focus. However I tried countless variations on this theme and could not get any response from AHK whatsoever, until Ctrl+Alt+Home was pressed. My assumption is that these claims are either outdated and do not apply to the latest RD application, or they were simply working with RD's "Apply Windows key combinations" setting set to "On this computer". Additionally, some of them were using 3rd party RD applications, which presumably handle input capture differently.

Update: I did eventually get the following script to sometimes activate the full-screen RD session titlebar:

However it's incredibly inconsistent, and I haven't figured out why. Even if it worked 100% of the time, it uses F2 as the Hotkey, and I've not been able to get Ctrl+Win+arrow to be recognized in the RD session at all.

I got around the issue with having to press and release the hotkeys by changing the script so it binds the hotkeys when run and never unbinds them.

4
Creating a fake display on windows 10?