How many USB Keyboards can you add to a Windows Computer?

This is a serious question, for which I haven't found an answer.

I am looking to buy USB foot-pedals, each of which will register as a USB keyboard with one key.

Programs, like Emacs, which require holding down multiple keys will become easier to use. It will also make writing a document easier because instead of holding down shift for a capital letter, I can instead press the foot-pedal.

I might have about three to four foot-pedals (= USB keyboards) in total.

Is this technically possible?

You ask where the limit is, but I can't tell you that. I am fairly sure it will go far higher than what you want to do and the limit is more likely to be something like: as many usb ports and hubs you have that work together with the PowerSupply from your computer. This should easily mean 30+ if the circumstances are right.

In general, as many as the USB protocol can address on one bus (which is 127). I do recall that the Linux kernel needed a special option selected if one wanted to use more than 8 devices of the same type (printer, mass storage, HID) – just saying that Windows may have a similar software limit.

However, you may consider one thing... USB uses frames of 1 ms for a transfer. Most keyboards are low-speed devices which means they operate at a lower rate (8 times slower). If you use multiple keyboards or other devices on one bus, the delays may be significant.

Depending on what computer you are using, you may have multiple separate buses, or one bus with a built-in hub. In the latter case you may experience delays of tens of milliseconds.

To back this up with an example: Here's a screenshot of Wireshark on my USB. I have a USB mouse connected and I was moving it around frantically to record as much traffic as possible. I've highlighted two consecutive transactions over the bus. As you can see by the time stamps on those transactions, they differ by 8 ms. That means my mouse is a low-speed device. 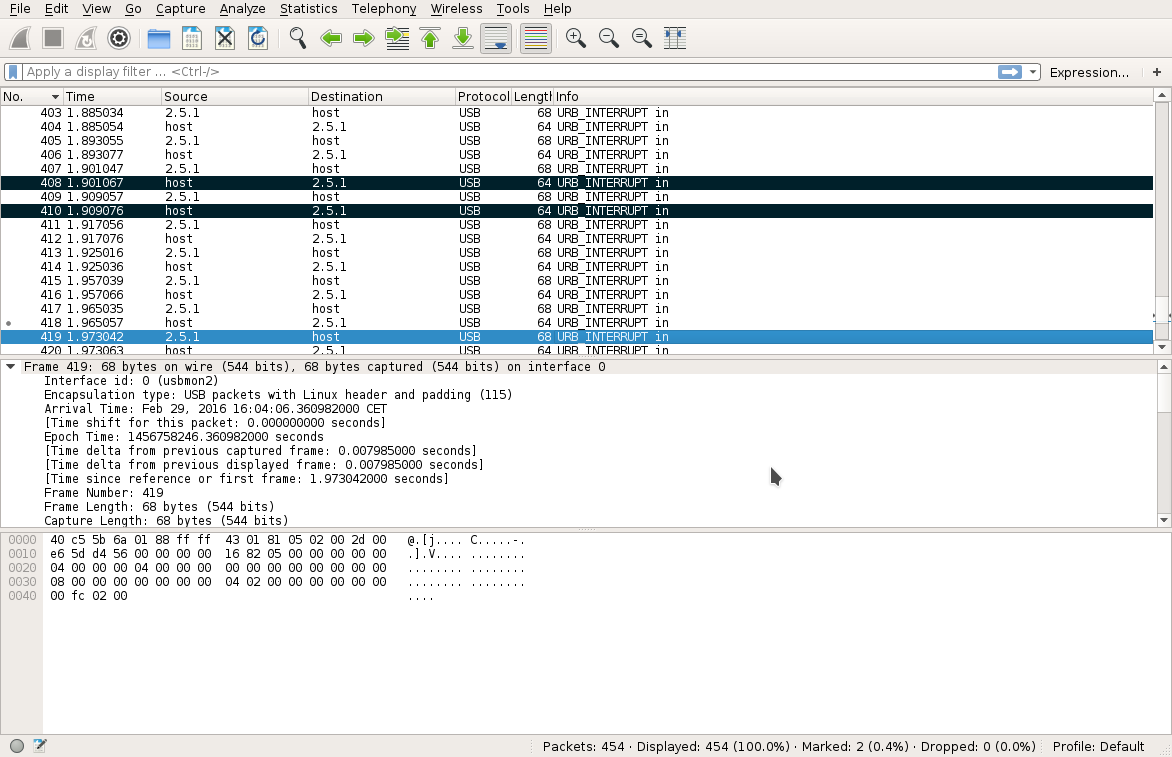 The maximum is at least 14. "You can just plug 14 keyboards into a Windows machine through USB hubs." https://youtu.be/lIFE7h3m40U?t=619 By default every keyboard acts the same -- every "Z" key types the same "Z". If your macro program can detect which keyboard each key is pressed on, you can (for example) make every connected keyboard type different characters, for use with multiple alphabets, additional characters (letters, symbols, or emojis), flight simulator controls, etc. Tom Scott made 14 keyboards act as one ~1,330-key keyboard. He remapped the 13 added keyboards to cover every Unicode 8 emoji, using LuaMacros.

Not the answer you're looking for? Browse other questions tagged windows usb keyboard keyboard-shortcuts or ask your own question.