first question on this forum, hopefully someone will be able to help. 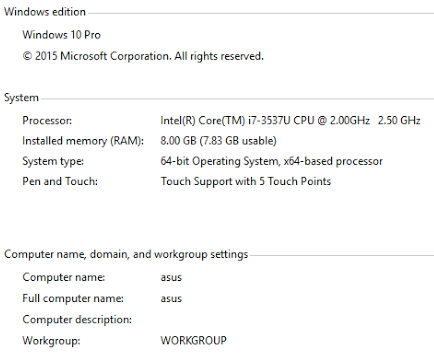 Recently I've been experiencing system freeze for 10-60 seconds, and by that I mean that the system is completely unresponsive, nothing works (nor mouse or keyboard).

From the observations I can tell that this is not a HDD problem as this is hardly utilized during the freeze time, but what caught my attention was the memory.

As I was installing some updates for visual studio and running some other developer tools, I've noticed that the system went into a freeze mode almost on anything I've done, click the start menu given the example, or just clicking on the windows explorer window.. so I've looked at the task manager and have noticed that once the system has hit around the ~30% memory utilization the system locks were more often. As soon as I've released the memory by closing as many process as I could it became more usable.

I've noticed my D partition was running low on disk space, less then 1GB. I've backed up some data to free up the space up to 10GB. Nevertheless, the pagefile was set to point to C partition which has plenty of space, I'm not sure whether lack of free disk space on one partition would affect the other. At the same time, Windows has decided to update and installed KB3139907 and KB3140743 So far once I put some load on the computer it easily climbs to 50% without any freeze.

Only time will tell whether the problem has been resolved and would be hard now to tell and pinpoint to what exactly might have had eventually resolve the problem. Thanks for the memtest86 tips.

The issue is not resolved at this stage, another observations are:

The issue is still persisting. Another observations

Well, I've received the official ASUS support response, and ASUS product owners affected are not going to be happy, just like myself:

For your request, we would like to aplogise for could not provide you with the needed driver since this product model does not have drivers support for Windows 10, both on ASUS site and Intel site.

About your case, the root cause for it was because the BIOS and Chipset cannot be updated to run on Windows 10. Freezing after sleep is the symptom of BIOS not working correctly. For the best performance, please kindly go back to the previous Windows

This is where my loyalty to ASUS products ends, I've had around 4 laptops and 2 tablets from them.

In addition in a bid to resolve the problem, I've uninstalled the ASUS Instant-On, so far so good. But as I've said it, it will be back tomorrow LOL

I have read your statements and was about to give out on windows 10, although I like it very much since it's faster and the battery lasts longer. Reading the post though, you gave me an idea at where the problem might be and I think you were right; drivers!
Yes, Asus unfortunately do not support many of the drivers for windows 10, however I went to a third party application, to update my drivers which seemed to do the trick. One of the outdated drivers was indeed the DRAM. I am one month in with this solution and it seems to work fine.
The application i used is driver booster 3.4 pro.
AHmed

Not the answer you're looking for? Browse other questions tagged windows-10 memory freeze or ask your own question.