How to shut down the computer without the update on Windows 7?

Sometimes when my Win 7 machine has programs that crashed, maybe Firefox, or IE, I would like to shut down the computer without installing any Windows update. That's because I worry that if IE or Firefox crashed, the system is not in a very stable state, so I would rather install the update later.

But it seems I only have 2 choices:

1) Shut Down and it always will do any Update
2) Restart, and no update is done

(these are 2 choices among the shut down / log off option)

So is there a way to Shut Down without doing the Update? Or must I restart first, and then do the Updates, and then Shut Down? 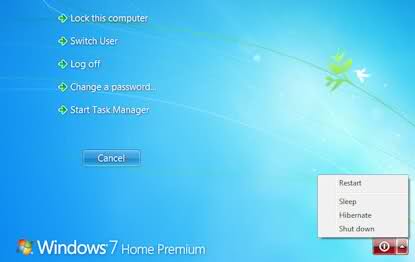 There is a Registry Hack provided by The How-To Geek on how to disable this here:

Add a 32-bit DWORD value called NoAUAsDefaultShutdownOption to HKEY_CURRENT_USER\Software\Policies\Microsoft\Windows\WindowsUpdate\AU with a value of 1. No reboot should be necessary.

You can apply it manually or download the registry file which enables and disables this feature. I deploy it to all Windows 7 machines I own and it works beautifully.

Easy way, press Alt + F4 on the desktop then select "Power Off" (or "shutdown", something similar...)

I tested it by myselft and confirmed this works:

Another option is to hit Win+R to bring up the run menu, then type

/s means shutdown. You can instead use /r for restart or /l for logoff.

There are other options too

3
How to stop Windows 7 from applying patches on shutdown
66
With Windows 10 how can I shut down without installing updates?
0
Is it possible to set Windows 7 to download updates now, but install them on the next shutdown?
0
How to disable "Update and shutdown" and restore plain "Shutdown"
0
How can I prevent Windows from applying updates when shutting down when low UPS charge is left?