Reoccuring Issue with Windows Fails to Start After Shutdown

After migration I booted SSD and all worked fine after I had to restart system a few times. That was until I had to shutdown laptop which was when I saw the following:

Windows failed to start. A recent hardware or software change might be the cause. To fix the problem:

Insert your Windows installation disc and restart your computer. Choose your language settings, and then click "Next." Click "repair your computer." If you don't have this disc, contact your system administrator or computer manufacturer for assistance.

Info: The boot selection failed because a required device is inaccessible. 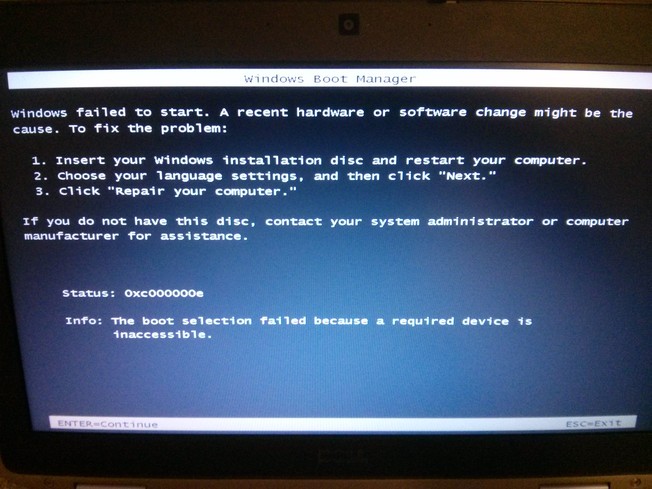 Used System Repair Disk that I made from my OS and it did the job and it all worked again until shutdown again. Then I had to repeat procedure with disk only to realize that system partition is found but it still keeps looking for something as progress bar did not stop and let me proceed. I set from Raid to ACHI in BIOS which made SSD disappear so I switched to IDE and then I could proceed past progress bar. It seemed as disk did its job: 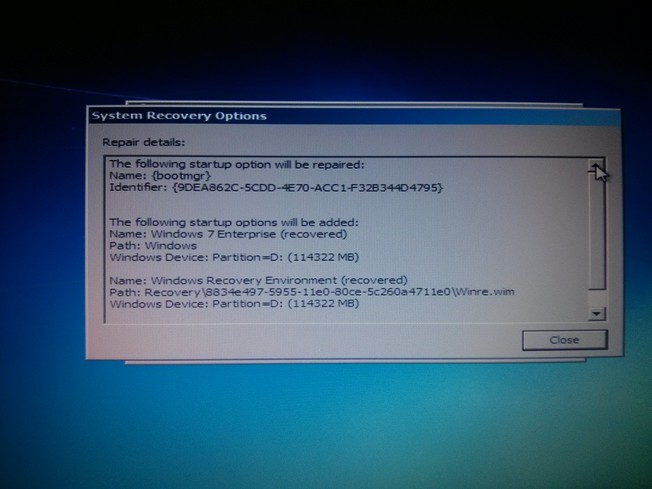 I noticed system partition is D: which is strange as it was supposed to be C: and maybe it's just because I am in recovery environment? I tried to BCDEDIT to set it to C: but was given errors: 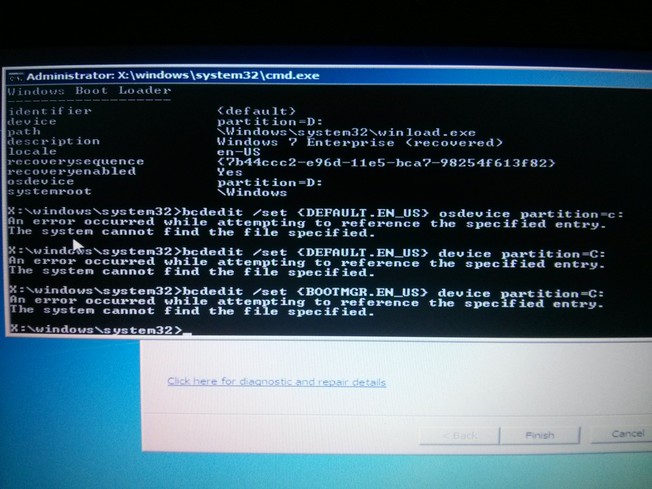 Hoping it would work it did and here's what I see now currently in Windows: 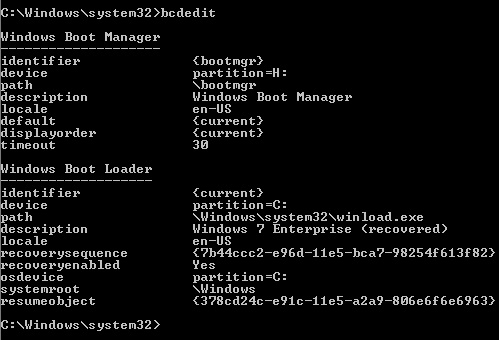 I don't know what to expect after I shutdown laptop again but I am trying to prevent this problem in future. Could it be that BIOS somehow keeps boot configuration in its CMOS and disregards what System Repair Disk corrected in bootloader / mgr sector?

Here's a photo of Windows Disk Management for previous SSD: 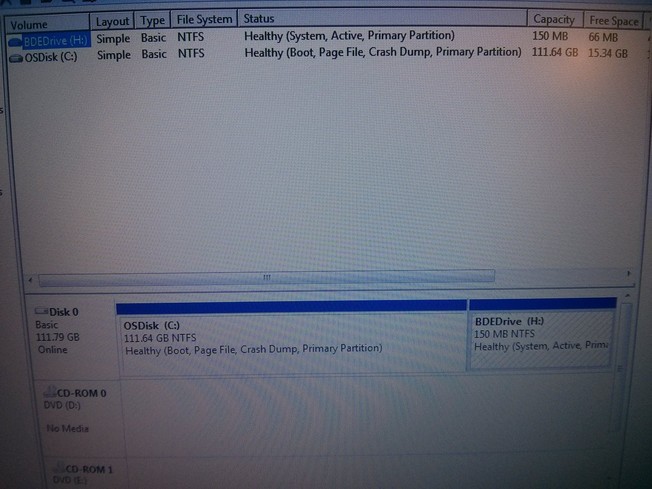 And here's a photo for current SSD: 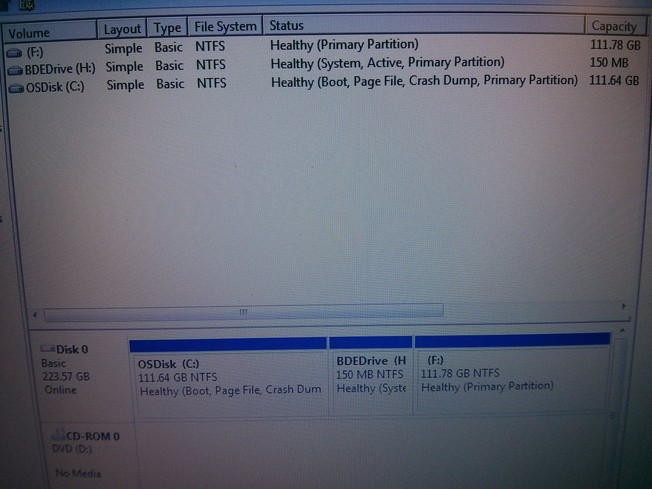 1. Attempted to use bcdboot as Tom Yan suggested but saw no output from applied command: 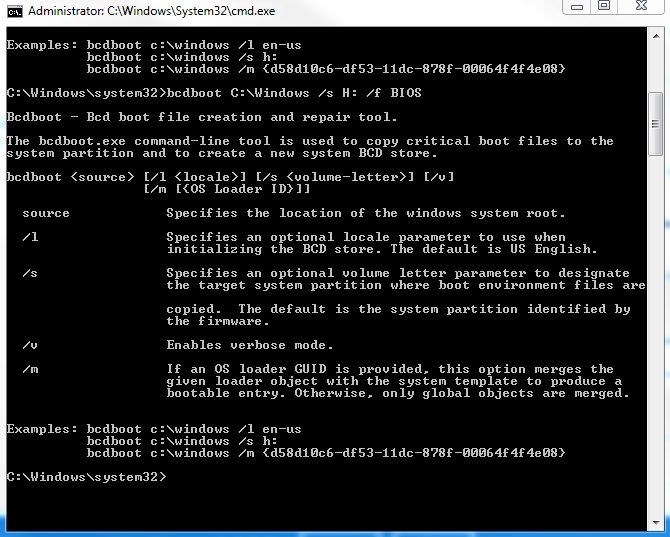 2. /f BIOS Parameter is not implemented in Windows 7 so that's the reason command didn't work first time. It worked without it leaving all prior though and here are a few things that changed in BCD Store: 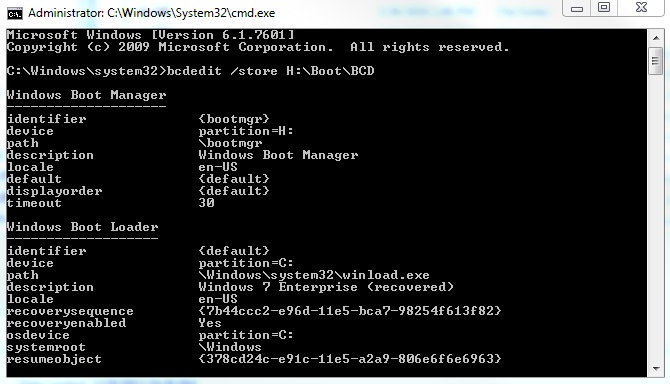 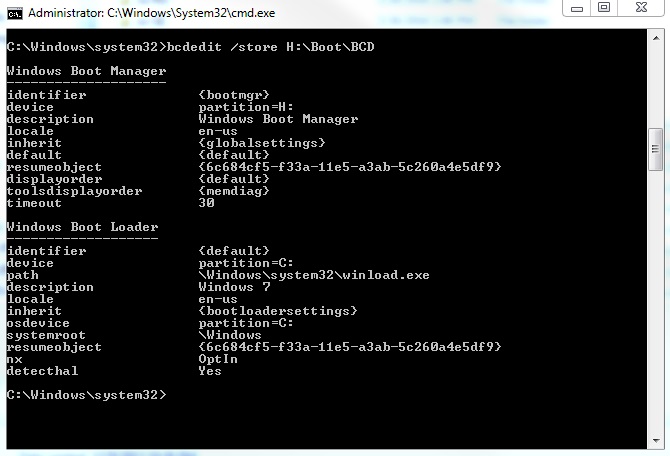 I hope this didn't downgrade it to Windows 7 Starter? And there's this "recovered"

Here are files I have now in H:/Boot

While I don't know what all these added/removed parameters mean, I think that based on "recoverysequence" and "recoveyenabled" removed parameters as well as added backup boot files every time it failed to boot and I had to use recovery CD it temporarily referred to boot settings in backup boot file/s and then reverted to normal boot file after I restarted system. Since it remained unchanged it leads me to think that was the reason behind failed boots and only when I applied bcdboot as was suggested it finally made necessary changes in boot file. I am not sure if it works but will report once I restart.

3. This drives me nuts already. After several resumes from standby and normal work I got BSOD which did not have enough time to capture and after restart I get the following screens, some appeared one after another and others after further restarts: 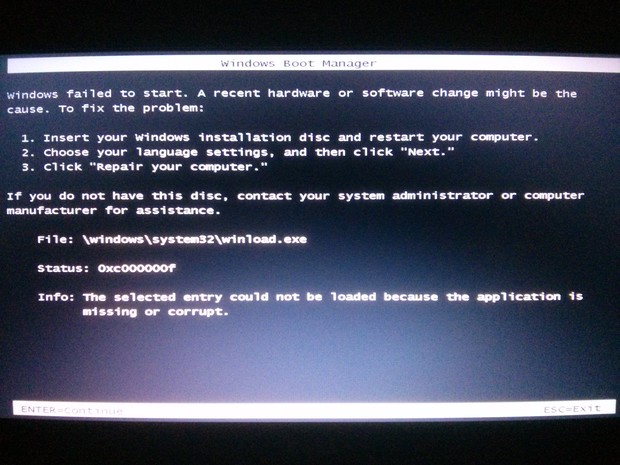 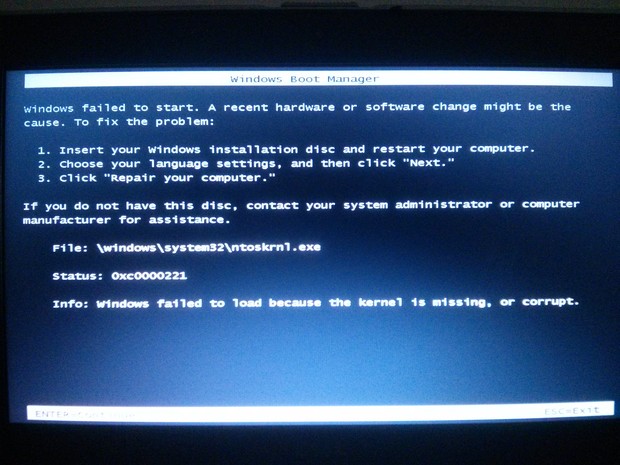 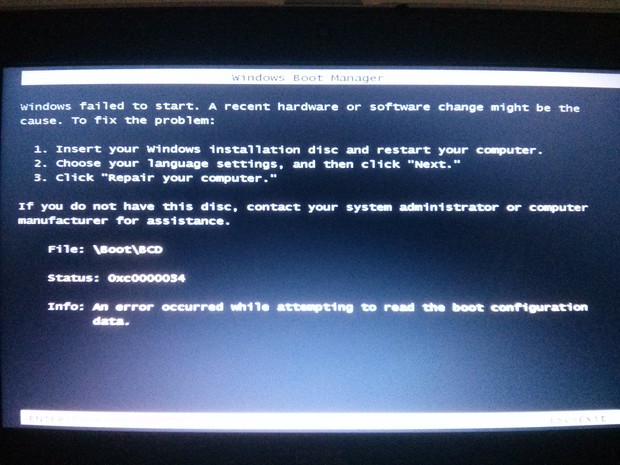 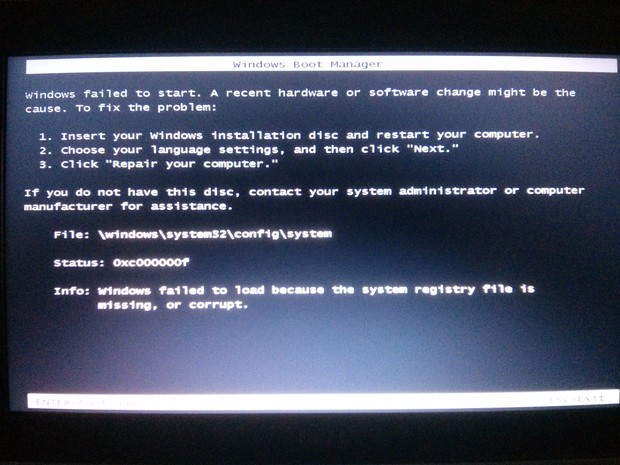 Here's BCD entries that I see in REGEDIT and one highlighted is "resumeobject" that I see in bcdedit. Could be all other entries cause conflict so they must be deleted?

I had to use System Recovery disk to repair in order to boot the system again. I am going to delete BCD backup files. Maybe it reverts to them which causes error to repeat.

In case for some reason you don't want to use a separate partition for that, you can do this instead:

Then change the active partition to C::

Then you can, for example, delete H: and F: after reboot and extend C: til the end of the drive.

Using bcdboot to fix your BCD Store will cost you its association to the recovery environment available on your system. That is, you won't be able to create recovery USB drive: 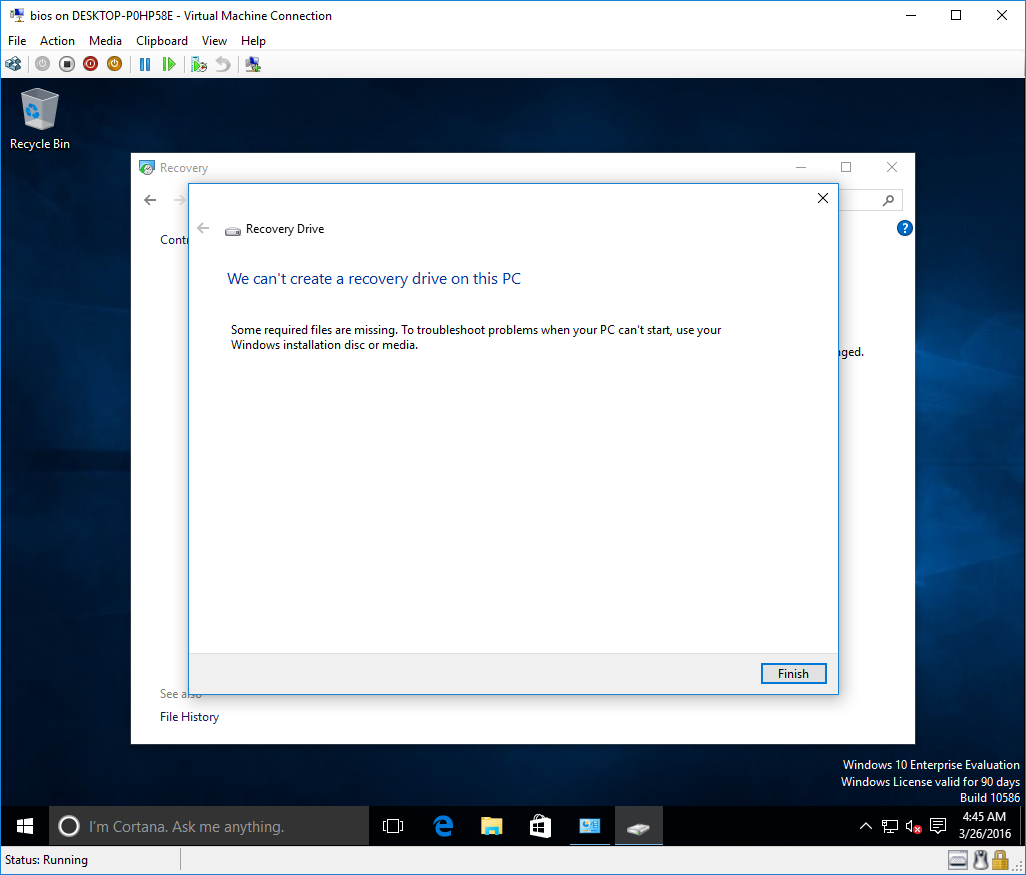 as well as, Reset this PC and most items in Advanced options will be lost when you boot to Troubleshoot with Advanced startup: 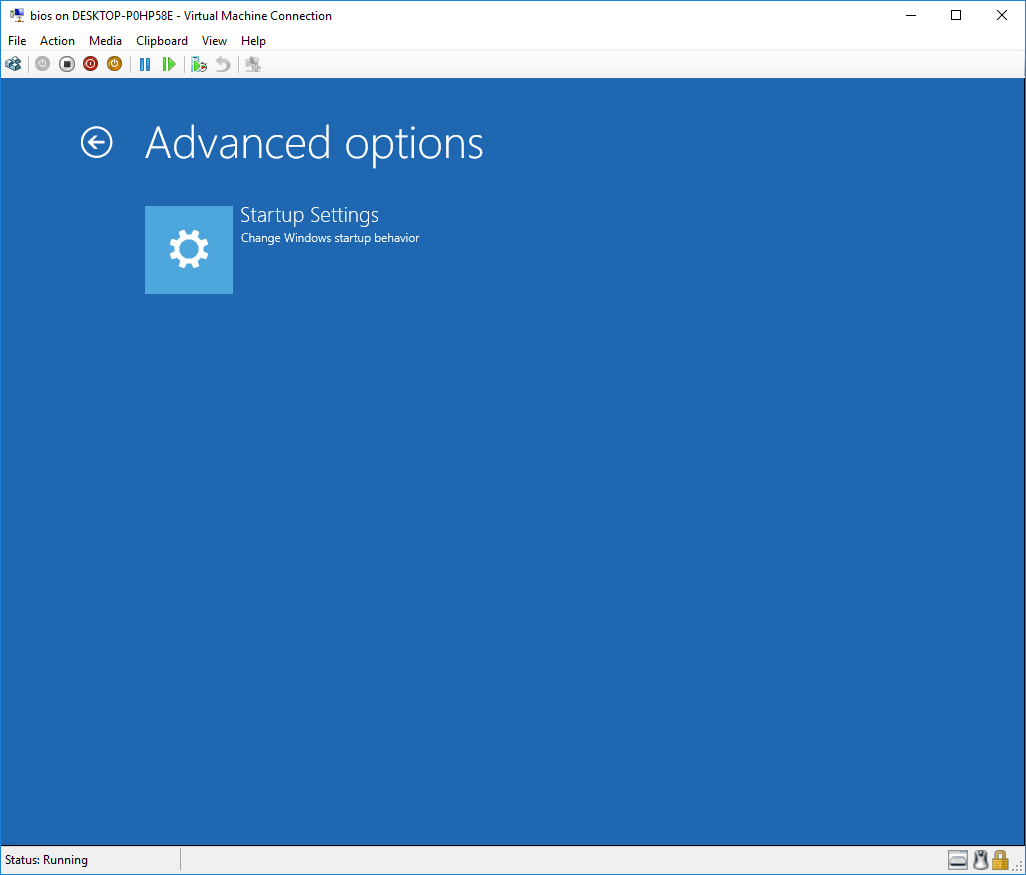 With so many manipulations done to Windows and the boot partition, it will be very hard to diagnose the problem without physical access to the computer.

I would therefore counsel to fix the problem with a big hammer :

I may not be fully understanding what u r doing, but anytime I upgrade a drive I use Marcium Reflect to clone or image the drive. I have never used the data migration tool. Since u r going from a 120 to a 240 u can extend the drive after cloning. That will produce a bit-bit copy and everything should be good.

Not the answer you're looking for? Browse other questions tagged windows-7 ssd bootloader system-repair-disc data-migration or ask your own question.