How do I properly load a PSD in GIMP?

I wanted to load up free PSD's from TurboSquid.com, they are royalty free, and they encourage the downloads... But I CAN NOT, load them up in GIMP at all. All they show is a WHITE screen when i load it into gimp. I have GIMP v2.8.16, and I have tried to drag and drop, or manually load, or open with on the file itself. Nothing seems to actually want to open it up nothing... any help would be appreciated.

Tried downloading the link you pasted, from https://www.pixelsquid.com/stock-image/square-wooden-crate-1010261998966937049?image=G02 (after checking bugmenot.com to "log in"), and it downloaded a zip file Square%20Wooden%20Crate.G02.2k.psd.zip and after unzipping Square_Wooden_Crate_01.G02.2k.psd I dragged it into GIMP and the wood crate image appeared: 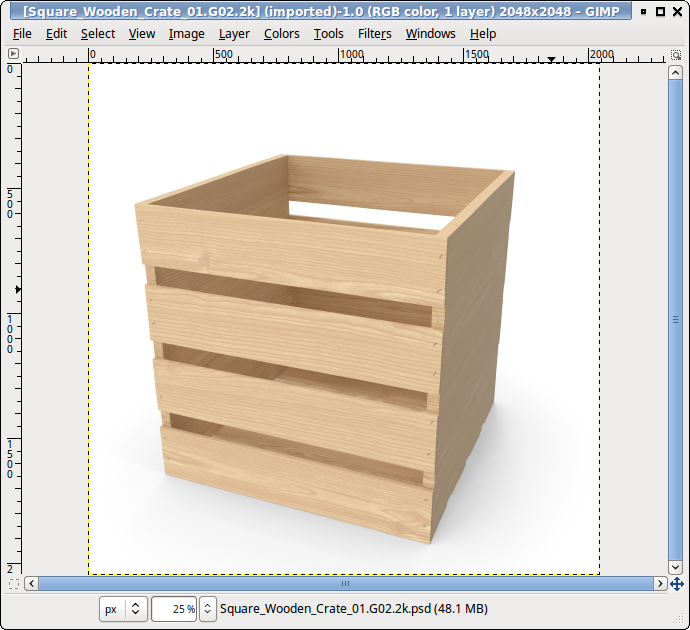 It is still just one "flat" layer, with some darkening around the bottom for it's "shadow," so it's probably not much better than an image from the webpage, but it is fairly high resolution and the white background isn't extremely difficult to make transparent.

This was after I tried downloading the below plugin & copying it to GIMP's plugin directory, but I don't think it did anything. And it doesn't seem to allow the rotating that their website advertises, maybe that's what the plugin does (and probably why it's a 100MB file for an image if a crate).

I think I've found the problem... the PixelSquid website has this info (not super-easy to find, and the plugin link looks like it might be randomly generated):

So, I think you need their special "PixelSquid Photoshop plugin" to use their files. Especially since I don't remember Photoshop or GIMP having a standard rotate feature like they describe "objects that can be placed and rotated right inside of your Photoshop comp. Just click-and-drag to find the perfect angle."

I'm not too sure if that plugin will work in GIMP...

--> Took another look on the plugin's page, and near the bottom there's a "Trouble installing?" section, there's a "Download (this plugin) using Extension Manager >" link, where the actual plugin can be downlaoded, so FINALLY got it downloaded. And avoided the "Adobe Creative Cloud desktop application".

BUT, it may require another program/plugin, the actual "Extension manager CC" to install it. It's supposed to be here: Adobe Extension Manager CC.

From GIMP's help on plugins it looks like GIMP's plugins are plain scripts or compile-able programs, probably more than a little different from plain PhotoShop plugins. And my Linux's file doesn't even know what the plugin is, aside from data. With a hex editor it looks almost completely random, as if it were encrypted or something... maybe it is, with all the trouble it took just to download it, and Adobe wanting it's own program to hold my hand while using it.

I did try Tor Lillqvist's program "PSPI is a GIMP plug-in that runs 3rd-party Photoshop plug-in filters", but using Linux & WINE didn't work out for me (psp.exe.so segfault), and I'm not holding my breath that the Adobe Extension Manager CC would work any better.

At that point, I'm giving up. But at least I think I found the problem - missing the "PixelSquid Photoshop plugin". If you're using Windows you should have better luck, since on Linux it's the windows & WINE programs that are giving me trouble. So on Windows the PSPI plugin for GIMP should work, and then you can try using the PixelSquid plugin. And the "Adobe Extension Manager CC" program (plugin?) should work on Windows too...

Not the answer you're looking for? Browse other questions tagged images adobe-photoshop gimp or ask your own question.

1
Why can't my Firefox load CNN.com properly?
1
GIMP 2.6.11 on Windows 7 64-bit can't open PNG files
5
Make GIMP 2.8 open in a maximised window and add an “Edit with GIMP” right-click context menu
8
Copy and Paste Selection in Gimp is copying empty space, instead of image?
0
How to change several images in gimp that are already open
7
How can I get Explorer to show thumbnails of GIMP xcf files?
0
Gimp Portable and file-jpeg
0
Slicing Images on Gimp
1
Copy and paste does not work with free-selection tool in GIMP