I've just installed GIMP 2.8.16 on Windows XP (32-bit). The installer prompted me for everything -- which components to install, file associations, etc. -- except for the installation folder (which it selently selected to be %ProgramFiles%\GIMP 2).

How do I install GIMP into the different folder? It occupies ~400 MB, and I'm running low on disk space on my C: drive.

At least with the GIMP 2.10.x installer, using CMD to do gimp-<VERSION>-setup.exe /? revealed that the installer can be started with an install-directory pre-defined. Presumably this is for people who are doing regression-testing or such and want multiple versions, but this can also solve your issue.

On GIMP 2.8.22 at least, the "Customize" button is on the bottom left of the installer: 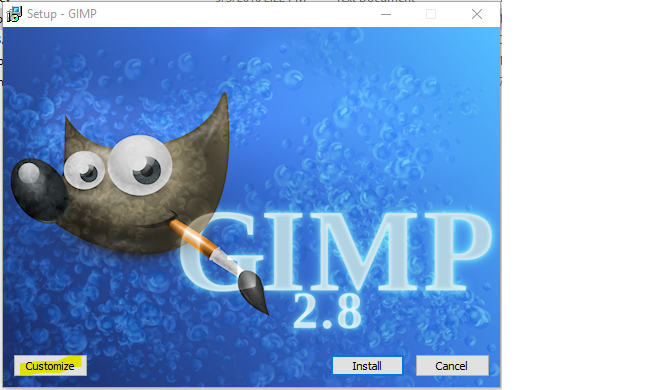 Strangely, once I've uninstalled GIMP and re-ran the installer, it did allow me to select a folder during the second run.

I'm not sure whether this is an intermittent bug or intended behaviour though.

You could use GIMP portable, and copy it into another folder on a different partition.

I had the same problem, with no Gimp installed.

I had Gimp on another drive, which I removed. The installer was still thinking Gimp is installed. I had to open Uninstall applications in control panel and find Gimp (which had default Windows icon... not the Gimp icon). I clicked uninstall and an error appeared messaging that Gimp could not be found. It also asked, do I want to remove it from apps list, so I clicked yes - and it worked.

I had this issue when I was just mindlessly clicking to install GiMP for ALL users. Once I selected "Install just for me" and then chose the custom install it allowed me to select a directory.

I run into the same mess as you guys, today!

You just need to clean the old one. Then reinstall, and select custom installation icon that located at the lower left corner. Good Luck!