I need to calculate the average interest rate for a calendar year, based on a table of exchange rates which change at various dates.

The table simply shows the start date and end date of the set interest rate, for a period of ten years. The interest rate may change as often as four times in a calendar year, and in some years not at all. In a ten year period there are 22 entries. I need to calculate the average interest rate of each of the ten calendar years in the period.

So in the table above (DD/MM/YYYY format), to reach the average interest rate for 2008, I calculate the following:

Is there a formula I could use to calculate this in Excel?

My biggest challenge so far has been to apply any formula to effectively "drag down" to produce the correct results for each calendar year.

I produced an answer which essentially does the trick.

Thought I'd post it here in case this comes up for someone else. 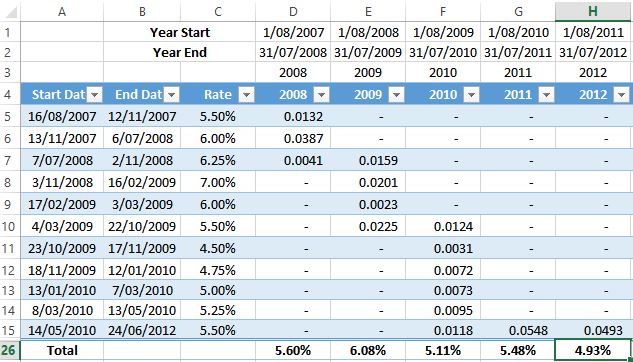 I've added a new column for each year, and above each column, entered the start date and end date of the year (in this case starting 1 August and ending 31 July the following year).

From there I've used a variant of the following formula in each cell:

Which could be broken down as:

While this needed a larger table, it produced a pretty accurate average interest rate for each period, as shown in the totals. It did feel a little clunky, but as the actual table is much larger, the formula could be easily dragged across a large number of periods and entries.

It may have been more accurate using the YEARFRAC formula, but I had issues producing a "zero" result for the future periods, where no result is expected.

I'm sure there's a cleaner and more accurate answer out there, which I'd be very interested to learn, but this might be helpful to someone.

Not the answer you're looking for? Browse other questions tagged microsoft-excel worksheet-function date-time or ask your own question.

5
Excel formula to convert per-annum interest rate to compounding daily and weekly rates
0
Selecting the date of every Monday and Wednesday from a date range
1
Cumulative average using data from multiple rows in an Excel table
0
How do I calculate the effective growth rate in excel, with monthly deposits?
3
Calculating compounding daily interest - issues with leap years
2
Using the WEEKNUM function in Excel to calculate week numbers on the basis of 7 day blocks, primarily for Australian Financial Years
0
Calculate average annual growth rate per group in excel