I am trying to share a folder on my Windows 10 machine. The computer is connected to the network via Ethernet. The problem is that when I try to access this shared folder from another Windows computer, I get an error saying that "Windows cannot access \\xxxxx" with an error code 0x80070035 (Network path was not found).

Now, if on the Windows 10 machine I turn the firewall off, the share can be accessed by the other computers with no problem. So this narrows down the problem to the firewall settings.

What is confusing is all of the "File and Printer Sharing" firewall settings are already enabled (see below).

What am I missing? Is there any other firewall rule to be enabled? Any ideas?

(ps, I have only the Windows firewall, no other 3rd party virus protection or firewall programs). 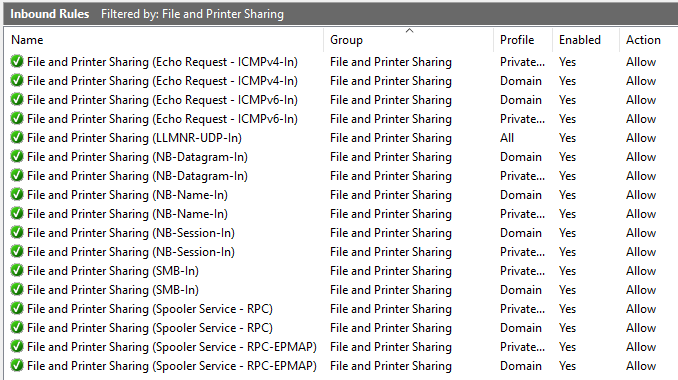 Edit 1: I manually added a rule to the firewall to open TCP port 445. Now the shares are visible. So most probably what @Jacob mentioned is right: somehow the system does not recognize it is indeed connected to a "Private network", though at least parts of system think so:

I manually added a rule to the firewall to open TCP port 445. This resolves the issue by allowing SMB2 and SMB3 over TCP. However, this solution is less than ideal since it does not answer the problem as to why the system's default firewall were not correctly setup by Windows.

I had the same problem, and @JacobBoykin's answer made to look in the right direction. But it's not only about being on a private network for a "private network" firewall rule to apply. Note that a few columns further to the right, the scope of many (at least all private) rules is set to "Local subnet", such as here:

The solution, in my (DHCP) case, was to edit rules to extend the scope; basically, I added "10.1.0.0/16" to the scope of the private "File and Printer Sharing (SMB-In)", which opens port 445 to requests from that IP range. That was enough in my use case.

Alternatively, I guess I could have changed my IP configuration to have all computers on the same subnet.

I have the same problems, with folders on 2 Windows 10 computers, and I get it fixed.

I had this same issue but when I looked at the advanced firewall rules I discovered that port 445 was already open. In my case it was because I was on a different VLAN. I fixed it like this:

There's a good explanation of these settings here.

I'm assuming your computers are not members of a domain, correct? I would double check your network location settings for your Ethernet connection and verify it is set to private before digging into Firewall settings.

Go to Start, type Command Prompt (run as admin) in the search bar, at the command prompt enter the following commands. Its easiest to copy and paste from below, and press Enter after each paste:

Then reboot your Windows 10 machine;

This should do the trick.

When sharing wasn't working for me on a very recent install, I gave up and reset firewall to defaults then re-enabled file sharing and let Windows get the settings right. I noticed as I did this one of the prompts was to "make the network I am connected to a private network" - this despite it already appearing to be labeled Private before. I suspect this Public/Private setting was somehow silently out-of-sync (as I bounced between two PCs signed in with a Microsoft account?) and was the cause all along.