I've had to switch a lot between different computer recently and realized that Google Chrome's history synchronization feature doesn't work properly for me.

What I've tested so far:

I had the latest stable version of Chrome running on three devices. I was logged in with my google account and history synchronization was enabled in the settings as well. I opened the history, and opened different websites on each device. I waited a while and sadly no synchronization and merging happened. What's strange, though, when I opened one page on my android phone which is also connected with my Google account, the page appeared immediately in the history on all other devices.

After that I even tried new fresh versions of Chrome with a newly created Google account with no success.

Please enlighten me whether I've been doing something wrong or if the feature is not intended to work that way. (synchronize and merge the history of multiple devices into one complete history)

I was using the encryption with a sync passphrase instead of just my google password. (see attached picture) I found out that if you choose this option, Google doesn't synchronize the history across devices as stated on this support page

In order to switch to the first option, I reset my Chrome synchronization to enable the history sync across all devices. However, it still doesn't work properly I only get the main sites listed (e.g. Google, Stackoverflow) but not all visited sites (e.g. stackoverflow.com/posts/*** etc. ) in detail. The question is: Is that intended? Do you get every visited page synced?

I was using the Chrome extension "Better History" which was causing the consolidation of the visited pages from other devices. After disabling the extension everything looks as wanted so that the matter can be seen as closed. 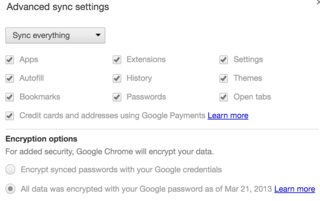 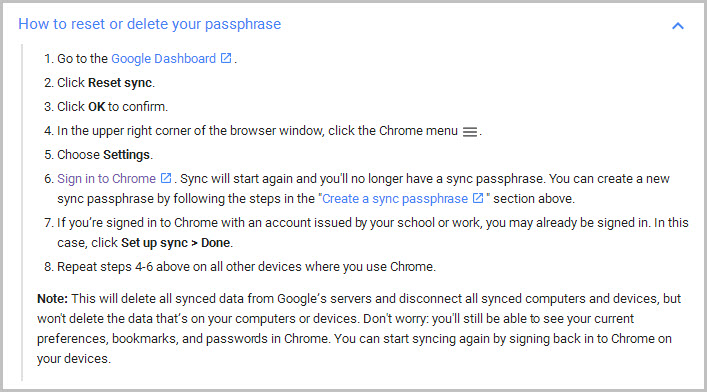 Not the answer you're looking for? Browse other questions tagged google-chrome sync history or ask your own question.

6
Which folder Chrome stores my history on Mac?
17
Firefox Integration with Chrome (Google Accounts)
15
Show history from all devices in Chrome
0
How to force google chrome sync to update site favicon
1
How to prevent frequently visited websites' history get deleted as I cleared the browsing history?
3
Manually Sync between Google Chrome Tabs