I have a HP elitebook 840 running Windows 7. My problem started when I was holding the laptop and dripped some juice from the plate of food I was also holding. I started to clean off the little bit of juice (mainly on the corner, a little bit on the keys) and as I was doing so I pressed a bunch of the corner keys where the FN, CTRL, TAB and Power button is. I accidentally pressed the power button and the screen turned off, and laptop hibernated (normal, set to hibernate when power button pressed). Then when I tried to turn it on again, everything looks normal (keyboard backlight comes on, fan turns on) but the display doesn't show anything, not even any backlight. The only other thing I've noticed is that the CAPSLOCK and NUMLOCK keys flash 5 times when booting up, which might be normal, I've just never noticed before.

I have tried doing a hard reset by powering off the laptop, removing the battery, press and holding the power button for 60 secs, plugging in power cable and turning back on. Can't get the display to work at all :( I've tried plugging a VGA cable, attached to a monitor, but there is no signal to the monitor. Please what could I do to fix this?

This indicates a General system board failure.

Maybe some of the liquid has gone inside and damaged your motherboard.

Please try the troubleshooting suggestions below.

Startup Symptom: LEDs blink or computer beeps but does not start

Use this document if the notebook does not start, but the LEDs near the keyboard blink several times, or there are a series of beeping sounds, just after the power button is pressed.

The blinking LED lights on newer computers, or the beep tones on older computers, will help support agent determine what hardware component is not responding properly. The exact meaning of each code varies with the model, and the user cannot change any of the blink or beep codes.

DO THIS FIRST - Perform a hard reset

If a PC suddenly fails to boot properly, you should perform a hard reset as the first procedure.

When there is a start-up problem and you see LED lights on the keyboard blink a few times (between 1 and 8 blinks), or hear a series of beep tones (between 1 and 6 tones), do the following actions. There is very little you can do to resolve blink or beep code messages until you contact an HP Support Agent or authorized HP Service center.

With the development of the Extensible Firmware Interface (EFI) environment, the HP Pavilion and Compaq Presario notebook computers built in 2009 or later use blinking LEDS to identify hardware component reporting an error during startup. The codes are not valid for other models.

When you see blinking LEDs or hear beep tones, you should contact HP for technical assistance. Report the number of LED blinks, or the number and duration of the beep tones, and the model or product name of your computer. The Support Agent can help you troubleshoot the startup problem. 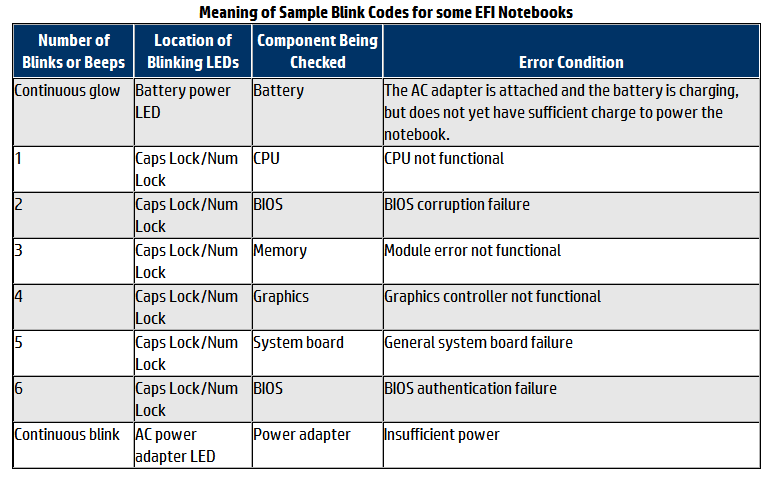 Try holding down all four arrow keys and then pressing the power button, this will recover the Bios and hopefully solve your issue.

For future reference, beeps and flashes all have meanings. http://h20564.www2.hp.com/hpsc/doc/public/display?docId=emr_na-c01732674

Not the answer you're looking for? Browse other questions tagged windows-7 laptop display or ask your own question.

3
Laptop does not boot after unusual static discharge?
1
New M18x laptop, white screen shows up when booting
2
Windows 7 - Windows security center is turned off - safemode
0
Wifi won't turn back on after I accidentally turned it off
0
Laptop screen black before BIOS
3
Why do laptop manufacturers turn off only the backlight not the whole LCD?
1
Laptop only turns on when screen cable is disconnected
0
Windows PC starts, but no display signal