What are "scriptlets" the referred to in Windows Group Policy Editor?

The Local Group Policy Editor in Windows 7 has a policy option to restrict the running of "scriptlets". This option can be found in Computer Configuration > All Settings > Allow scriptlets and looks as shown in below image. 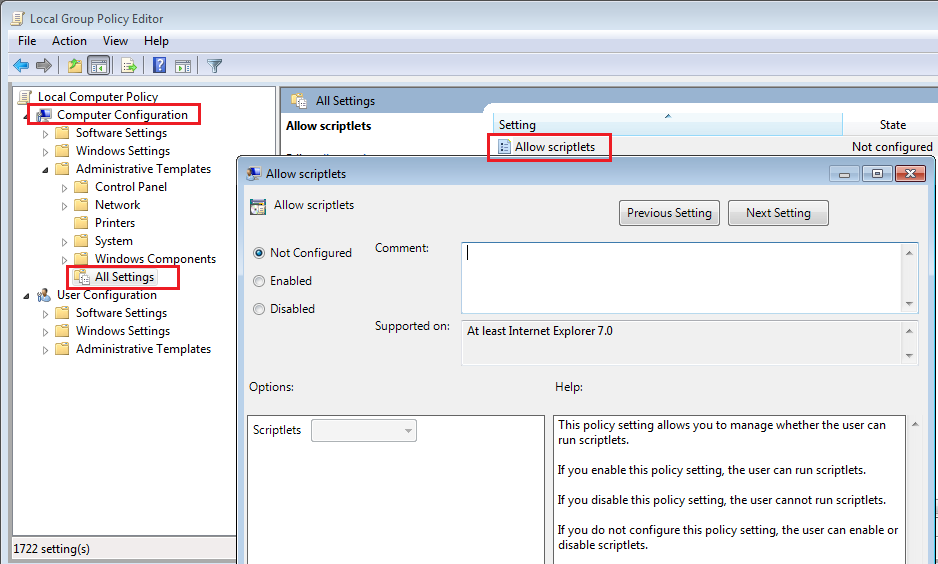 Presumably scriptlets are files containing some kind of programming code, but I have some questions I would like to ask:

The policy says that it is supported on "At least Internet Explorer 7.0.".

Does blocking scriptlets have an effect on the JavaScript executed in the browser when visiting websites?

This particular group policy does not determine if JavaScript is executed or not executed within IE. That behavior is handled by an entirely different group policy.

Or are these scriptlets some code running purely locally?

A scriptlet could ran from a remote url or a local url.

What programming language(s) are supported for these scriptlets?

A scriptlet is a lightweight, reusable Component Object Model (COM) component that consists of HTML code and script and is created according to certain conventions. A behavior is a lightweight component that encapsulates specific functionality. When applied to an HTML element, a behavior enhances the element's default behavior.

Scriptlets and behaviors are very similar in that they both contain script in a separate document that exposes functionality that can be used in a Web page. They differ in that behaviors are STYLE attributes that point to a separate file containing script that is called in response to an event associated with an HTML element. Scriptlets, on the other hand, can be used for almost anything you can do with script in a Web page.