Will a 100 Mbit/s wired router slow down my internal network speeds? (See diagram)

Now I understand that my Internet speed is determined by my weakest link, which in general is based on what speed I pay for. I am looking at purchasing a new wired router and the one I want is only 100 Mbit/s, as opposed to some gigabit/s options out there so I am wondering, would the gigabit/s speed have any impact on my internal network?

See this diagram below for how I have my network configured: 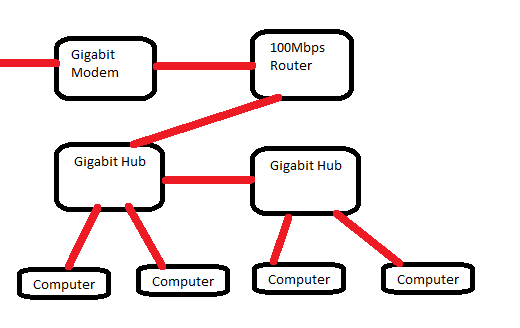 I have gigabit/s hubs connecting my devices back to the router. This means that they are unmanaged of course. I am looking at getting the wired router essentially to just to do the management of assigning IP addresses. Since everything else is unmanaged up to the point of the router, will the 100 Mbit/s speed impact my network?

I am trying to learn here so if the answer is yes or no, please add some explanation as to why this is true.

Your internal network will not be any slower due to the fact that all devices will communicate to each other directly (by ARPing and storing MAC addresses). You will be a little slower when you interface with the router (web administration, etc.), but that should not be noticeable.

Traffic going through the router (such as going to the Internet) will be slower than your internal, but generally most consumer connections are not greater than 100 Mbit/s and as such your Internet traffic will be limited by that.

This answer assumes your gigabit hubs are in fact switches as those are more common.

This will work fine. Your internal network will run at gigabit speed while your access to internet will be capped by the 100mbps speed.

I use this setup for my IP camera network. The cameras and the recording PC are on a gigabit network, while the internet link router is only 100mpbs. But I try to access only one camera from the internet at low res, while the recordings happen at high definition for all cameras.

When I dont access from the internet, I hardly see any packets running through my router, except when I power cycle a camera, which I guess is DHCP to get the IP assigned. only the switches blink hard otherwise.

Depending on the uplink speed from the modem to the ISP it is possible but rather unlikely that the use of a 100Mbit/s router will slow down your LAN. The explanation is going to get rather technical.

First of all, I will assume what you call gigabit hubs is in fact switches. Back in the days when most networks were running 100Mbit/s hubs became less common and got replaced by switches, which will give you a better network performance than switches. So it is quite unlikely that you are using hubs. I don't know if gigabit hubs are even being manufactured.

The switch receiving packets from the router will have to buffer the entire packet from the router before it can start sending it to the next device. This won't slow down your LAN. It may increase the roundtrip time to the internet, and with this happening in both directions it may cost you as much as 0.3ms on the roundtrip time to the internet. If you try to measure this slowdown, it will probably get lost in the variations in roundtrip times introduced by lots of other factors.

The point where things get interesting and potentially problematic is on the upstream. We'll consider the scenario where a computer on your LAN is sending data to a server on the internet as fast as your setup can keep up with.

If the upstream speed from your modem to your ISP is less than 100Mbit/s. The roundtrip time on your internet connectivity will increase.

As TCP on the sending computer starts, it will slowly increase the sending speed until it reaches the limit. At some point it will be sending data faster than the upstream from the modem to the ISP permits. At this point the modem will start buffering packets. For instance packets may enter this buffer at 100Mbit/s from the modem but only leave towards the ISP at 50Mbit/s. As the buffer usage grows, the internet roundtrip time increases. And since these buffers in modems tend to be too large, the roundtrip time can increase significantly. But even a too large buffer will eventually fill up, and the modem will have to drop packets.

TCP on the sending computer will notice the increased roundtrip time or lost packets and adjust its sending speed accordingly. Thus it will stabilize at a sending speed lower than the 100Mbit/s which can be send from the switch to the router. Thus your LAN will not be affected, but internet connectivity will feel very slow for any interactive usage.

If the speed of the upstream from the modem to the ISP is increased to more than 100Mbit/s, the bottleneck is going to move. And the problem will look quite differently.

If the computer sending to the internet was connected to the rightmost switch, this problem would not only affect the sending computer, but also the connectivity between the two switches.

Which of the two problems you could experience depends on whether the upstream capacity from modem to ISP is more or less than 100Mbit/s. But there is a single solution, which can solve both problems.

If your router can do bandwidth management, you can configure it to limit the maximum traffic it will send to the modem. Configure this such that it will a few percent be less than the capacity of the bottleneck (which is the smaller number of the upstream from modem to ISP and the 100Mbit/s through the router).

When the router reaches this configured capacity, it must either use ECN or drop packets to signal that capacity has been reached. This will cause TCP on the sending computer to adjust to your upstream capacity before introducing any of the problems explained in this answer.

If the server receiving the traffic being send from your LAN is behaving maliciously, it can get even worse. By sending crafted acknowledgements, the receiving server could trick the sending computer on your LAN into believing there is more upstream capacity than is really the case.

Under those circumstances it is possible for a computer on your LAN to keep increasing its sending speed past the point of any bottleneck. This obviously doesn't remove the bottleneck but may create multiple bottlenecks where there should be only one.

If your internet upstream capacity was 50Mbit/s, the malicious receiver could still cause a sender on your LAN to send with the full 100Mbit/s. This will quickly fill up the buffers on the modem, and cause switches on your LAN to push back on sending speeds.

In this case naively implemented bandwidth management on the router could backfire. Because it eliminates the latency increase while still allowing the malicious server to hide any packet loss from the sender. That way your LAN would suffer even faster.

The good news is that whatever upload you were performing to such a malicious server will finish much quicker than you expected. And you will probably just stop using such malicious servers. And the only harm done was a temporary slowdown of your network.

Not the answer you're looking for? Browse other questions tagged networking internet wired-networking or ask your own question.

6
Can you mix gigabit and 10/100 ethernet on the same network?
1
How can I improve the annoyingly slow internal speed on my home network?
1
Windows Network Connection Speed Property
0
How can wireless speed be higher than router's WAN port?
2
Unstable wired home network
4
How to fix Ethernet speed being stuck at 10 Mbit in Win10?
1
Router Saturation or Buffer Bloat?
1
Adding 10/100 router to a gigabit router to handle non-gigabit devices
0
I have a 16 Port Gigabit router connected to an unmanaged switch