What is the function of question marks in file system paths in Windows registry?

This is about the registry on a 64-bit Windows 7 Home Premium (my friend's computer). I was going to set the system to clear the pagefile at shutdown by setting the REG_DWORD value ClearPageFileAtShutdown in HKLM\SYSTEM\CurrentControlSet\Control\Session Manager\Memory Management to "1".

My question is however about the questions marks in the values ExistingPageFiles and PagingFiles in this registry location.

The question marks are shown in below image. 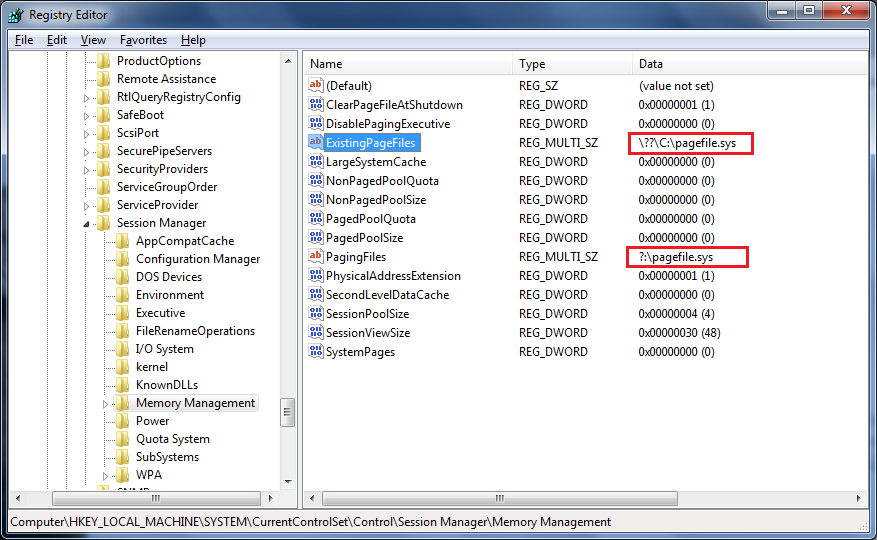 The questions I wanted to ask are:

Double-question mark paths are NT Object Manager paths that can look up DOS-style devices like drive letters. The Object Manager is a system that organizes lots of different kinds of system resources (e.g. devices, memory sections, window stations, events) into one tree-like structure. You can explore that tree with the WinObj tool.

The \?? pseudo-directory first looks in the requesting process's DosDevices table, but if the process doesn't have a specific definition for the device (as the component responsible for the page file probably won't), lookup proceeds to the \GLOBAL?? Object Manager directory. Its contents can be seen in the GLOBAL?? section of WinObj. There are other subtrees, like Device. In fact, every single item in GLOBAL?? is a symbolic link - a shortcut or alias - to an object somewhere else. \GLOBAL??\C: is (on my system) a link to \Device\HarddiskVolume4, and the rest of the path shown in your screenshot is a path under the root of that volume. Each drive letter shows up there as a symbolic link to the volume it's on. You might find other kinds of devices that are familiar, like CON and NUL.

Note: You can't use this kind of path to access files or directories in most applications. Only certain low-level system components are designed to work with Object Manager paths.

That explains your screenshot's ExistingPageFiles, but not PagingFiles. PagingFiles contains your virtual memory settings with paths to paging files expressed as normal paths. If your system is set to manage all virtual memory settings by itself, that entry doesn't specify a drive letter (only a file name and path), so the ? is just a placeholder for whatever drive the page file does end up on.

In summary, yes, those question marks are supposed to be there.

I seem to remember when using DOS cmd file queries, a question mark means single character wildcard. The double question mark I'm clueless to, unless it simply means a part of a path with 2 sequential wildcard characters. Hope this helps.

Trying to be helpful, since the ?: notation would refer to any drive recognised at the time the command was run in DOS 3 onward, in my experience.

I have seen the \?\C:\... path used a lot to get access to files/paths longer than 260 characters. At least when dealing with Win32 API calls. Although the structure in your screenshot varies slightly, I would feel safe assuming it is similar in behavior. Or, it could also be that the Win32 API (when reading values from this Registry key) will automatically replace those 'variables' with the appropriate values.

The Windows API has many functions that also have Unicode versions to permit an extended-length path for a maximum total path length of 32,767 characters. This type of path is composed of components separated by backslashes, each up to the value returned in the lpMaximumComponentLength parameter of the GetVolumeInformation function (this value is commonly 255 characters). To specify an extended-length path, use the "\\?\" prefix. For example, "\\?\D:\very long path".

1
What does the prefix `\??\` mean in a Windows path?
10
Why do we still have to use drive letters to identify file systems?
8
Mysterious "uninstalled processes" using network every time I turn on my computer

2
Possible malware modification of Windows registry entry
0
How does windows 7 know that it should not swap in data from a previous boot?
5
Meaning of the tilde in registry values for compatibility mode in Windows 8+
0
Why PATH environment variable value is different if we open command prompt from different locations?
45
When does Windows write registry changes to disk?
1
How to fix context menu handlers?
0
Where are Windows 7 Firewall custom rules stored?