This update performs diagnostics on the Windows systems that participate in the Windows Customer Experience Improvement Program. These diagnostics help determine whether compatibility issues may be encountered when the latest Windows operating system is installed. This update will help Microsoft and its partners ensure compatibility for customers who want to install the latest Windows operating system.

Said otherwise Microsoft uses your CPU and power to detect potential problems they may encounter if you move to Windows 10 (or if they force you to move to this version because it suits they agenda for not loosing against Google and Apple smartphones OSes).

They scan your files, and send the analysis to their servers. The problem is that users who "participate in the Windows Customer Experience Improvement Program" have seen their system slowed a lot with e.g. 70% CPU monopolized by the MS scanner, a program named Compattelrunner.exe. The latter can be launched on 100 or more concurrent threads. 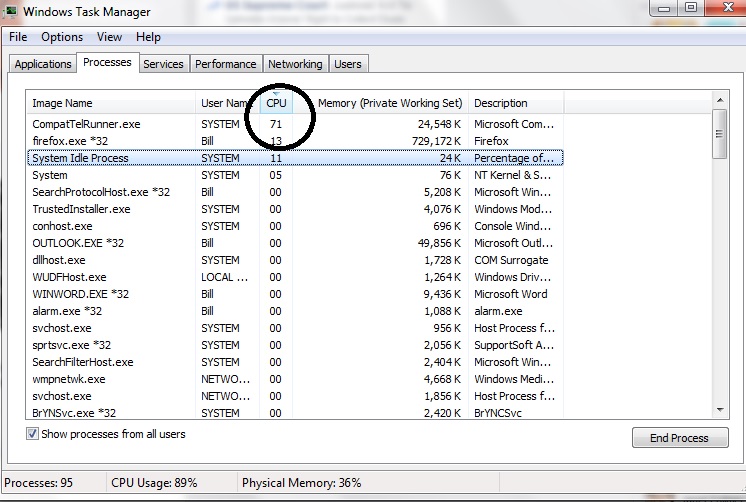 At some point users want to stop being used as Microsoft's auxiliaries at their own expenses and discomfort.

The usual way to remove an update, and prevent it from reinstalling is (details on Microsoft's site:

Problem: In some cases this doesn't work. As soon as the system is rebooted, the KB2952664 update is reinstalled automatically, in spite of it being on the "hidden updates" list, even if you are in manual mode. Said otherwise it installs without your permission. Some have filled a complaint to the FTC (US Federal Trade Commission) to try and stop this:

Microsoft updates install a program called compattelrunner.exe on my computer without my authorization even though my update settings say, "Download important updates but let me choose whether to install them." Compattelrunner.exe serves no legitimate or beneficial purpose, and causes serious performance problems (applications running slowly or freezing up); I caught it on my computer this afternoon consuming 71% of my computer's CPU (central processing unit) capacity. I have previo...

Question: Is there a way to get rid of the update, without it reinstalling at the next reboot?

I'm posting a solution, as I believe it will be useful for others in the same situation. There are many online endless posts and useless suggestions. This question and its solution should save time. Self-answered questions don't add to reputation, feel free to post better answers.

A simpler way to stop the CPU usage is to disable the Microsoft Compatibility Appraiser task in Task Scheduler under \Microsoft\Windows\Application Experience.

Symptoms: It seems the Windows update is reinstalled automatically without your permission, in spite you prevented it, and stopped any automatic updates.

Actual situation: The update has been installed multiple times (possibly 10 times or more) each time with a new version number, removing it remove only one version.

If you really don't know what Powershell is, or don't have technical knowledge about Windows, then it's better you learn better going further. Powershell is a powerful tool to do anything on your filesytem and configuration, including harm. You need to use it with Administrator privileges, meaning you won't have the usual system safety net.

The solution comes from this Microsoft Community thread: Unable to uninstall update KB2952664.

Remove one by one the versions:

Confirm everything is gone:

It should display a cannot find hot-fix error.

From my blog http://nonsumhircum.livejournal.com/883.html, you need to stop "participating in the Windows Customer Experience Improvement Program", which you can do (for W7 & W8) when running as admin, by:

Next, disable the scheduled tasks, thus:

Obviously disabling the above means you don't get the benefits of being in the WCEI Program(me).

Using PowerShell with elevated privileges, you can disable Microsoft Compatibility Appraiser with the following command:

Maybe related ot not, but i was experiencing near the same but not in CPU, it was I/O and arround 1h30'.

The cause was near similar, same place on Task Schedule, but different task.

Under \Microsoft\Windows\Application Experience there are three (on my case) tasks: Microsoft Compatibility Appraiser, ProgramDataUpdater and StartupAppTask

I had first and second Disabled but third was Enabled, and seen last time execution i can see it runs more than once on each reboot.

Also i could see it running for one hour and a half on each reboot, making all I/O to disk be very hard for other apps, so computer was really slow.

I have also Disabled the third one, so now all three are Disabled and the I/O problem on each reboot just disapear.

Now my PC can be used in less than a minute, instead of having to wait more than ninty (90) minutes, yes one hour and thirty minutes; that is a great win!

So my solution is to disable all tasks under \Microsoft\Windows\Application Experience; sorry M$, but i will not allow you to use my PC on each reboot for near two hours, when i power it on i need to use it, i can not wait each time so much time!

It was the CompatTelRunner.exe that was crashing my 8 Gig PC 4 CPU each startup after 3 minutes. I created a batch loop that swats their bug with > taskkill /T /F /IM CompatTelRunner.exe each 8 seconds by CHOICE delay. That saved my PC from repeated Microsoft induced crashes(Blue Screens) to my Hard Drive.

I now used the disables of Experience Tasks posted above ( From http://nonsumhircum.livejournal.com/883.html ) to see if I can now stop my task swatter too.

Based on mins answer, this is my one-liner version of the big button saying "Get rid of Windows Customer Experience Improvement Program":

198
How to stop Microsoft from gathering telemetry data from Windows 7, 8, and 8.1
23
Unable to disable Compatibility Telemetry in Windows 10
6
Windows 10 summons rundll32 after install something
5
Why CompatTelRunner is running while participate in CEIP is set to no?
4
Periodical performance drops and high HDD usage Windows10
2
High CPU usage on windows 10
0
Mouse pointer in Wait State after reboot - how to investigate/fix?
1
CompaTTelRunner.exe uses almost all cpu