Why is the F8 key not working on my laptop?

I recently had Vista die on my laptop, so I backed up the hard drive, formatted and installed Windows 7. So far, most things are working really well, with one very significant exception: The F8 signal doesn't seem to register.

Here's the strange part: Pressing SHIFT-F8, or Fn-F8, or other combinations work just fine, but F8 alone does nothing. I wrote a quick Delphi program to verify this. It receives WM_KEYDOWN messages from Windows for other keys, but nothing for F8 unless I'm also pressing a modifier key.

Has anyone seen this before? Any idea how to fix it?

EDIT: I mentioned this to a coworker and he suggested I might have F8 bound as a global hotkey, even though pressing it doesn't seem to do anything. But he didn't know how to find what it was bound to or how to fix it. Does anyone know how I could verify this, and fix it if that's what's going on?

Please note that Windows does not allow for detecting which application has registered a particular shortcut, so that feaure is not included. (If you think you know how to achieve that, using message hooks or what-not, please post here or earn some karma at Stack Overflow. 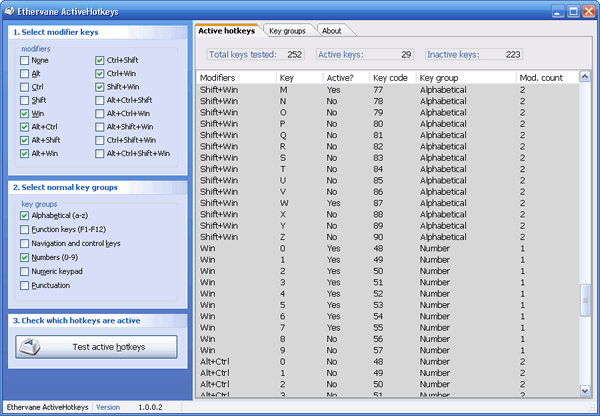 An answer in the Stack Overflow link leads to Hotkey Commander

Find out what hotkey combination is registerd by which application.

Override the original hotkey with a different key combination you prefer.

Automatically control hotkey actions under certain conditions like "after holding down for 3 seconds", or "if some application is running currently".

What if you use the On-Screen Keyboard with Windows 7. Does the F8 key work then? If not, then it is most likely software (or drivers). It seems unlikely that a software keyboard would be dependent on hardware.

Use the Fn key to turn on the Function keys.

Does F8 work outside of Windows? I.E. does it cause you to get your boot selection menu if you tap it during boot?

Does it work in Safe Mode?

How about in another bootable OS (try a Linux LiveCD of some kind)?

If yes to any or all of those it sounds like a piece of software in Windows that's catching the messages from the key and marking them as handled so the message goes no further.

You might try changing the keyboard layout to something different then the standard layout you are on now. That is under Region and Language in control panel.

Look in your services for anything that is not standard and disable them one a time.

Create a program that registers a global hot key (using GlobalAddAtom and RegisterHotKey) to F8. Set that program to launch before anything else on your computer. Then once everything finishes launching release the hot key (using UnRegisterHotKey and GlobalDeleteAtom). Then see if it works.

In my experience the culprit is either:

or something else designed to sit in the background and wait. It is probably in your system try.

End task on each one until it works.

I checked and there are functions to find Atoms, but no way to find out what keys they are tied to (if any).

I had this problem with my friends computer. The f8 key worked fine when used with shift or with any other key. He needed it to extend his laptop display to an external monitor.

He is running Windows 7 32-bit on a Dell latitude.

Try going on to the Dell website and clicking on support, then choose either home or work depending on what the use is for, it will then ask for a service tag (found on bottom of your machine) enter it and navigate to drivers and downloads. Make sure to select the option all related drivers for your product and also make sure to choose what operating system you are running. Choose 32 bit if you have RAM which is 4GB or less. If it is more use 64 bit.

To check the RAM click on start and right click on computer, from the menu choose properties and it will show you your RAM.

After choosing your operating system scroll down the list until you get to VIDEO. Click on it and choose the video driver which says Intel 3000. When downloaded follow the installation procedure and restart your machine when prompted to do so.

Not the answer you're looking for? Browse other questions tagged windows-7 keyboard hotkeys or ask your own question.

6
How do I debug why an OSX key binding stopped working?
2
Pressing an accent key (´ / ˇ) adds the character twice in most programs
4
Shortcut hotkeys occasionally not working
0
What could have caused the * key on my numeric keypad to stop working in Windows 7?
0
How to boot into Safe Mode in Dell Optiplex 760 - F8 key not working
0
Alt key and second underlined shortcut
9
Ctrl + Win + Num stopped working after Windows 10 updated to ver. 1803
0
Shift + E not working on Dell Inspirion; Shift Buttons and E key is individually working well