Did my graphics card (GPU) burn out?

My PC is (well, was, actually) running an NVIDIA GTX460 2GB graphics card manufactured by Asus. 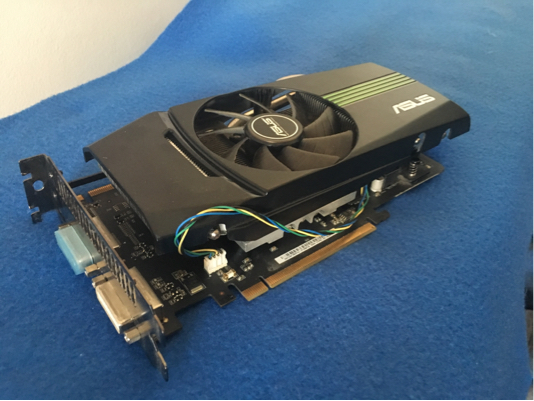 Yesterday I was playing some League of Legends when all of a sudden my screen froze and became filled with strange colored squares/rectangles; the game crashed, but after a second the video came back as normal. I continued playing and using my PC for about an hour, then joined another game and it happened again, but this time, after the pixelated image, my screen turned black and the "No input" message popped out on my monitor. I also had iTunes running with some music, which still was playing, but I couldn't seem to get the screen back to life nor interact with the OS (I tried some Win+L, Ctrl+Alt+Del, Alt+Tab and Alt+F4). I finally held down the power button to force a shutdown.

Now, if I reboot my computer the GRUB bootloader page displays, but it's filled up with random red/white/cyan pixel segments, like this: 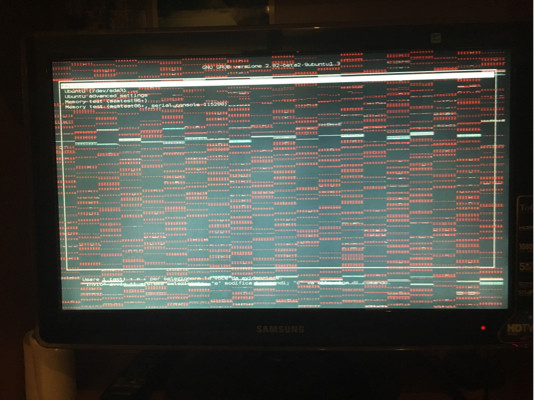 I tried to run Memtest86+, but I could't even read what was printed out on the console because it was filled with very odd random characters: 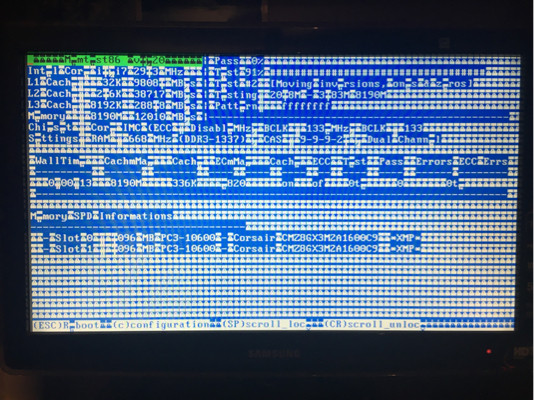 I first tried to run Windows 7 in recovery mode, and it seemed to work fine, except for the lines on the display: 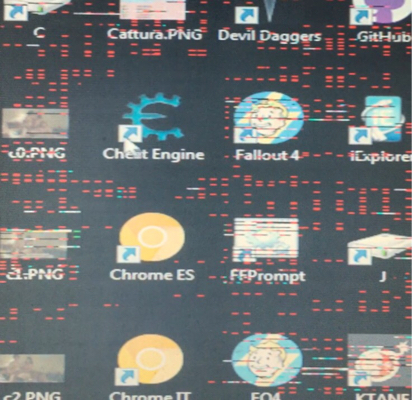 And, lastly, Ubuntu 14 which is installed on a partition of my second HDD: no strange lines displayed on the lock screen, but when I typed in the password and hit Enter the screen shut down, "No input" message showing.

I opened the case, unplugged the power supply and removed the video card from the PCI-E slot. I then removed the fan and the heatsink to look closer at it: it doesn't seem like there's anything broken, but I'm definitely not an expert. I noticed that the thermal paste on the GPU wasn't in very good conditions... I never changed it in 5 years of my computer's life, which probably wasn't very clever.

Unfortunately, my motherboard has no integrated graphics card, so I cannot do much with my computer right now, and if the video card broke I need a new one as soon as possible.

Did my graphics card burn out?

This is the only thing I could think of. I also thought that I could try to mount my roomate's graphics card (which is also PCI-E) on my board to check if it works: if it does, then the issue is with my card… would that be a good idea?

If you guys need any other specifications about the card or other hardware I'll add them in a flash, just let me know. Thank you very much for any help.

Maybe is the VRAM?

I also thought about this, because of the behavior of the video output... if the GPU was burned out the display wouldn't even light up. Instead, looks like parts of the pixel grid show random colors, so maybe the VRAM of my graphics card encountered some issue, does this make sense? I think so.

graphics-card hardware-failure nvidia-graphics-card
Share
Improve this question
edited May 13 '16 at 12:04
Marco Bonelli
asked May 6 '16 at 9:34

With a bit of reasoning and the help of some users in the comment section of my question I quickly came to the conclusion that my ghraphics card just died of old age. Installed in March 2011, it lasted around 5 years, and that's no surprise since that I used to use it quite a lot to play computer games etc. The red lines and random colored pixels make me think of an hardware failure in the VRAM of the card, which is a definitely unsolvable issue. To test it even further I tried mounting my roomate's graphics card on my motherboard and it ran smoothly without even configuring anything.

I bought a new card, an Asus NVIDIA GTX 960 Strix OC 4GB, and I'll have it delivered in a few days.

Not the answer you're looking for? Browse other questions tagged graphics-card hardware-failure nvidia-graphics-card or ask your own question.

13
Is it normal for a Dell Inspiron 530 to have is fan to spin up 3 times before it POSTS?