In testing SFB 2016, an offline message was sent from user A to User b's personal account.

Now user A's drafts folder in Outlook 2016 is filling with messages (150 a day, same timestamp) stating - 'Missed Conversation with User A while you were offline'.

I've tried deleting the folder c:\Users\UserA\AppData\Local\Microsoft\Office\16.0\lync as suggested online to no avail.

Does anybody have any suggestions? How can I get this to stop? Microsoft support say it is a known issue but as yet have offered no solution other than wait for an update.

You're nearly there. Within the c:\Users\UserA\AppData\Local\Microsoft\Office\16.0\lync directory is a sub-directory that is the same as the user's Skype id, e.g. sip_fred.bloggs@bloggs.net.

Go into that directory and you'll find a directory called "History Spooler". It is the contents of this directory that you need to delete.

Until Microsoft come up with a permanent fix, avoid sending IM in Skype to users that are off-line in Skype - it is when the receiver is off-line that the messages are created in Outlook Draft. If it happens again, repeat the above file deletions in "History Spooler".

I just disassociate Skype for Business (SFB Lync.exe) from interacting with Outlook. It prevents some crashes of Outlook and/or Lync as well. 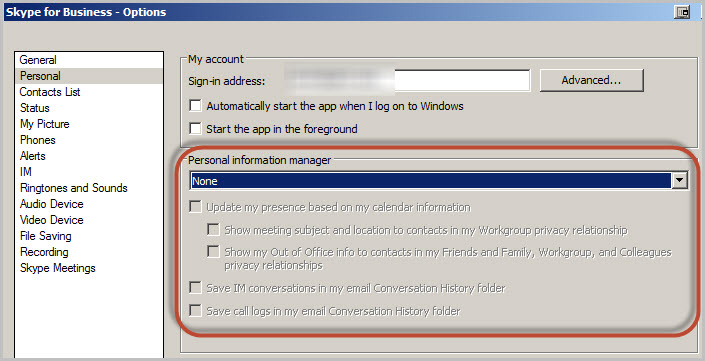 This is being reported as an issue if your company is running Exchange 2010. "... the offline message format is not excepted by the exchange 2010 server and therefore remains in the drafts folder." So far I have not found if the have come up with a patch for Exch 2010, to fix the issue.

Not the answer you're looking for? Browse other questions tagged microsoft-outlook skype or ask your own question.

1
Outlook Conversation view: Can I filter out messages in a particular folder from Outlook Conversation view
1
Multiple account Skype for business / Lync
5
How can I have Skype for Business automatically join meetings planned in the Outlook Calendar?
0
Tag for status change alerts in Outlook 2016/Skype for Business no longer works
3
Searching for unsent messages in Outlook 2016