I have a laptop that originally came with Windows 10; the hard drive is now completely empty, and using Gparted, it's been formatted as a single, empty NTFS partition with an msdos partition table. When I try to install the Windows 10 ISO, I get to the partitioning dialog and receive this error:

I know the hardware supports booting to this disk because it booted Windows from the disk when I bought it. I've tried both enabling and disabling UEFI and/or Legacy/CSM boot in the BIOS, and neither makes a difference. The hard drive is an NVMe SSD drive.

How do I get Windows 10 back on this machine? I saw this similar question, but that was an issue with extended vs. logical partitions, which doesn't apply here because there is just a single NTFS partition. Using the "Format" option in the Windows installer doesn't change the situation either.

(I created the Windows 10 USB with this procedure, but I don't think that's relevant because booting the USB isn't the problem)

It's almost certain that the problem has something to do with the fact that you are trying to install to an NVMe drive: 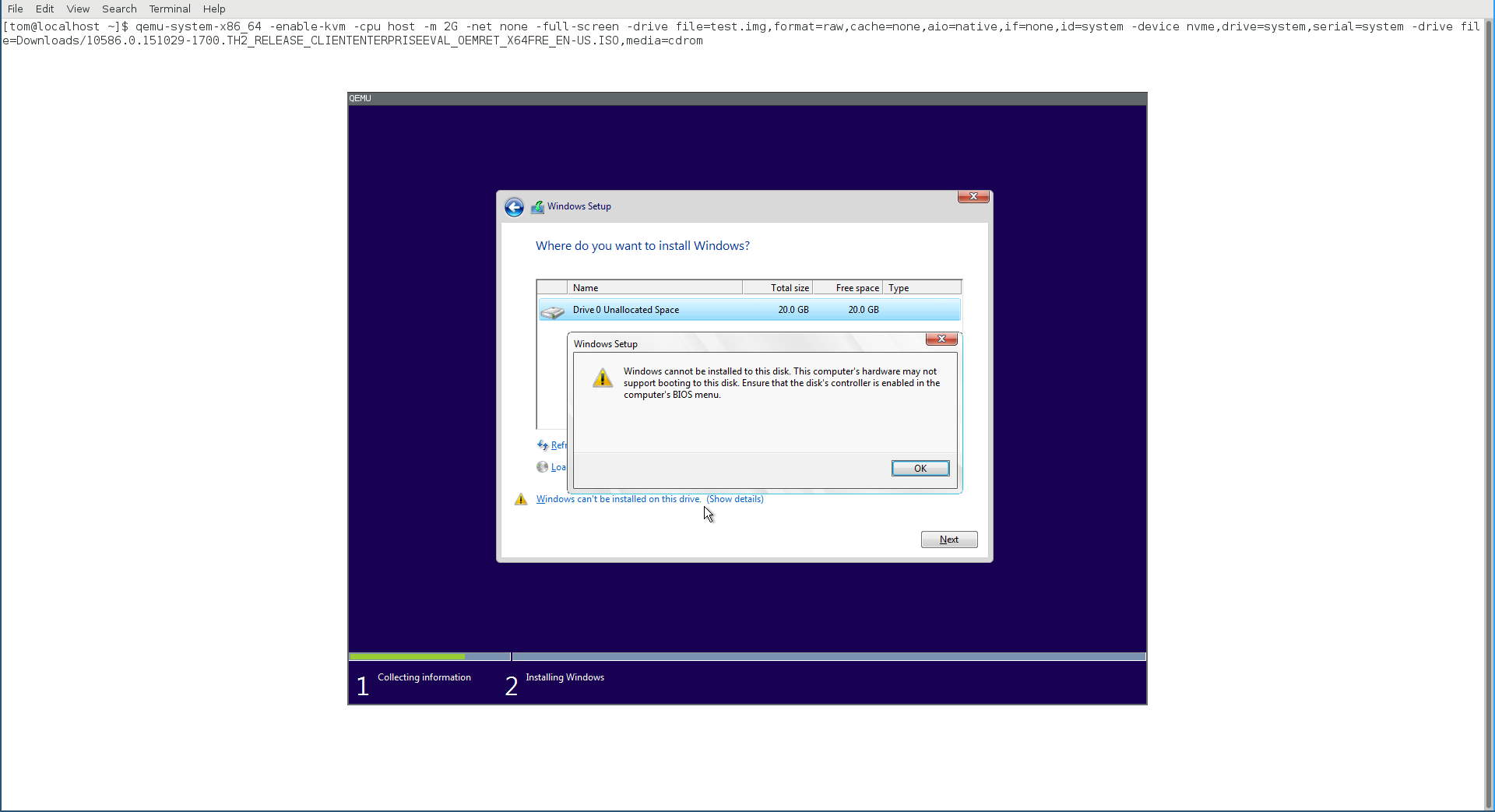 In any case, the Next button is NOT greyed out. So you can try to press it and see if you can go on with the installation.

My guess is perhaps there is some sort of bug or defect in your UEFI implementation, that although it is capable of booting from an NVMe drive, it failed to report so (or it could be a bug to some UEFI in Windows as well). It could also be due to the EFI version (I mean the "spec version", not the "vendor version") of your UEFI too. I have no idea how exactly does the Windows installer determine whether to give you this warning.

Still, you may want to double or triple confirm that CSM is really disabled in your UEFI. (Alternatively, you may also want to leave it enabled, but just pick the right entry in the UEFI boot menu so that you boot the Windows installation media in UEFI mode but not BIOS/legacy mode.)

In my test with qemu/seabios, I see the following error once I press Next: 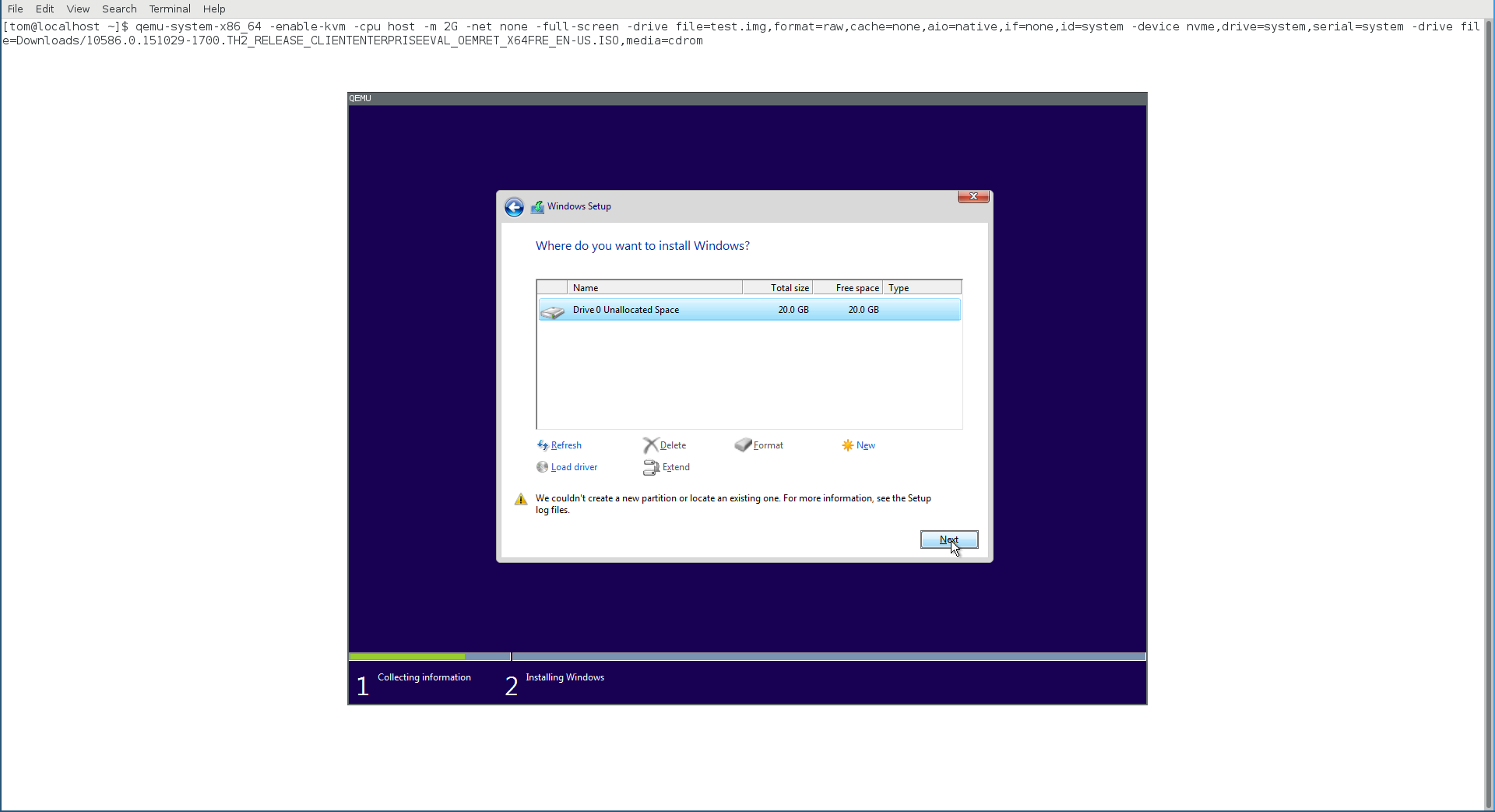 However, this may not necessarily be your case.

As oppose to what everyone else said/guaranteed, it has nothing to do with BIOS/GPT: 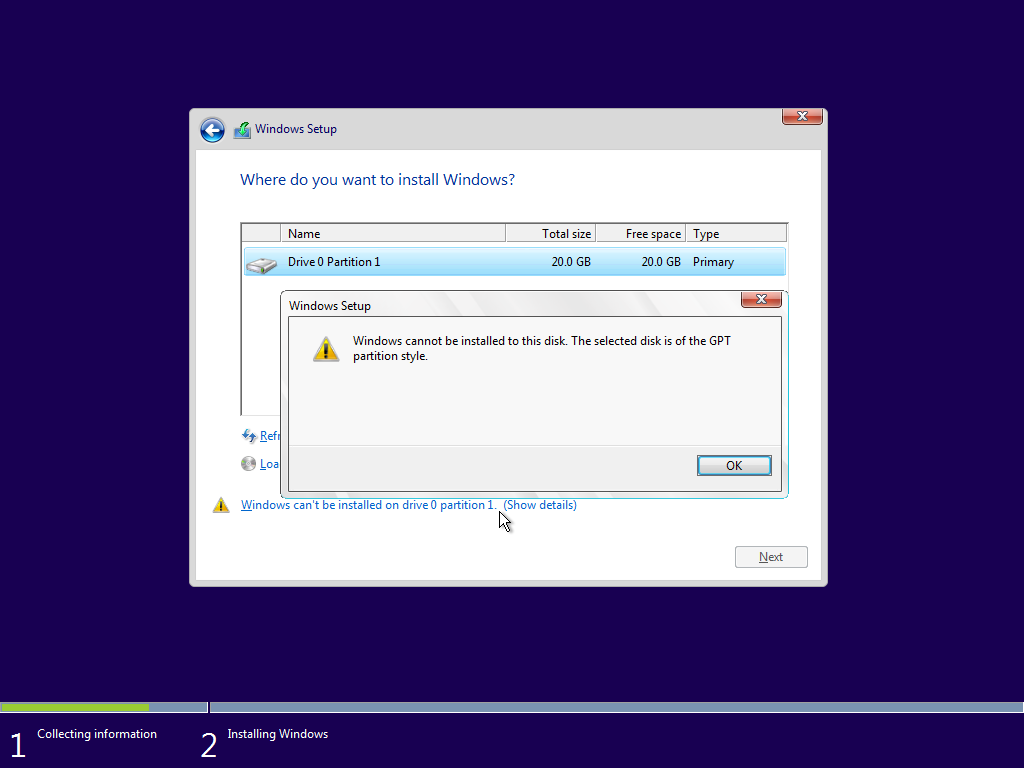 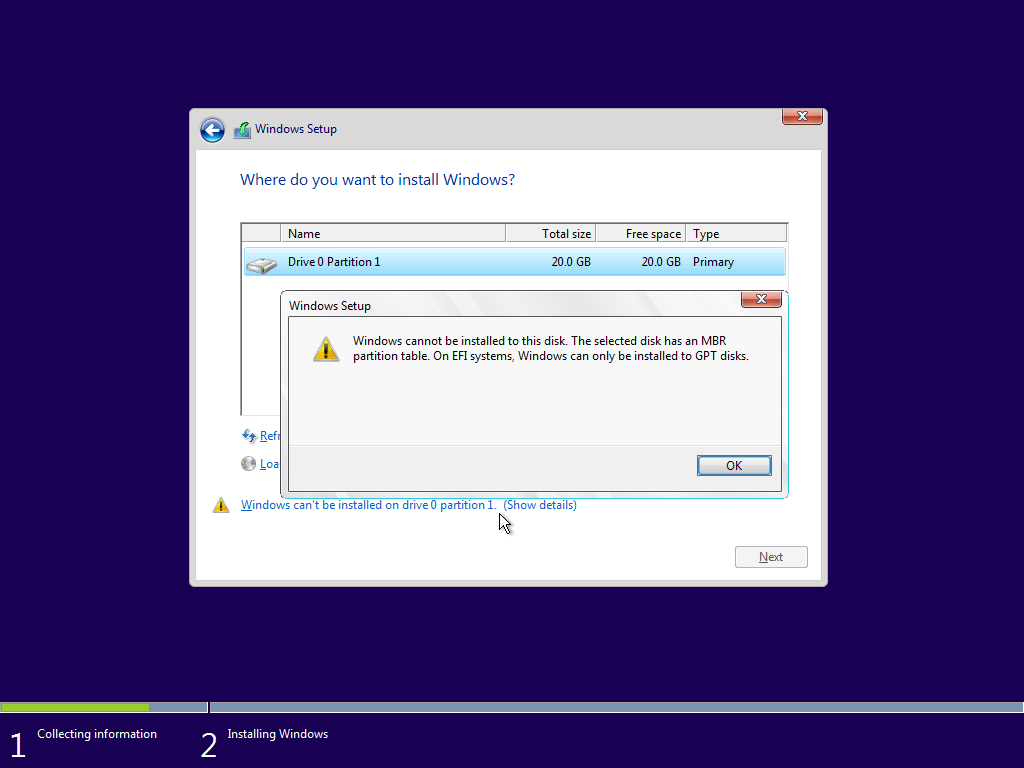 Also, the installer will not show the error in either case if there is no partition existing on the drive (and the MSR partition on GPT disk doesn't even count here), even if the disk is so called "initialized". The reason is Windows (Setup) consider it safe to convert the partitioning style if the drive is considered "empty", so Windows Setup will just convert automatically.

I just had the same problem installing Windows 7 on a 250GB Samsung SATA.

Long story short: Problem was caused after creating an image of that disk using Clonezilla and afterwards messing around with the partition table.

The solution was to use the Repair option from the Windows 7 setup, then get into the command line. Given your disk is completely blank and has no partitions on it, I used the following commands (disk 0 was my problem disk):

Then reboot and enter Windows 7 setup again. You should see the partition and Windows setup should not be complaining anymore.

Then select Drive options (advanced) and delete that partition. Otherwise Windows Setup might complain about not being able to create required system and restore partitions. Afterwards select the unallocated partition and click Next.

This worked for me

Then you should be able to install Windows on the disk.

I encountered this problem once when installing windows 10 on ASUS Transformer Book Flip TP200SA. I solved the problem by changing the USB mode from auto to forced fdd. That may solve your problem too.