Following on from my previous question (Can't remove recovery partition) I have been trying to use Diskpart - with the following results: 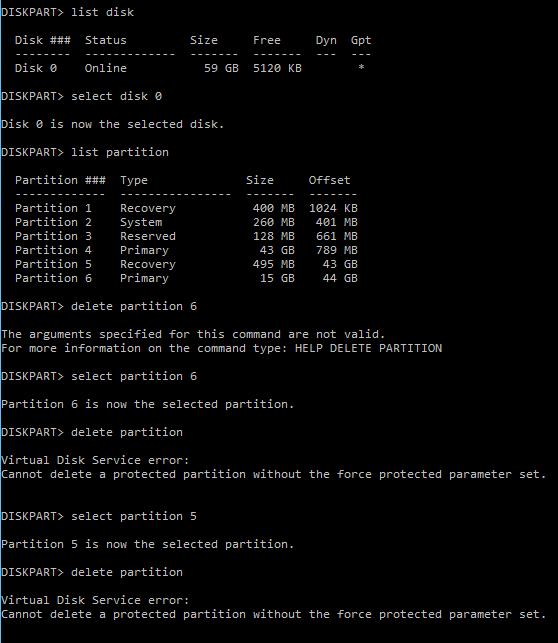 Is my disk locked in a permanent way or is this something I can easily address without additional tools?

Is my disk locked in a permanent way?

You need to add the override option:

Enables DiskPart to delete any partition regardless of type. Normally, DiskPart enables you to delete only known data partitions.

How to delete an OEM partition

This is a warning from Windows that you need to be doubly sure that you want to delete this partition.

If you see this error when trying to delete a partition then use:

Source How to delete an OEM partition

!!! It's a non-sense message of Windows, asking for a parameter that is not even indicated by "HELP DELETE PARTITION", the correct parameter supported ("OVERRRIDE", not "FORCE PROTECTION") is still not documented correctly... !!! My opinion is that it is an old bug of DISKPART, signaled since long, but constantly ignored by Microsoft).

It is needed to allow deleting the superfluous "recovery" partition that pollutes the drives after each release (the recovery partition is recreated again and again, taking space from the main partition at end each time its size needs to be increased, and leaving old recovery partitions unused, except they are still referenced by old BCD entries (see the result of command "BCDEDIT /ENUM ALL", I don't know why they are kept after updates).

Old recovery partitions have to be deleted, they are not even usable (I bet they are kept only as old backups but there's not even any tool in Windows to use them again...). They are protected with a flag which cannot be changed without deleting these partition with the override flag.

On a SSD, these recovery partitions are taking previous space (about 500MB each one, but growing from version to version: I have found a dozen of these old unused partitions, the one in use being the one immediately after the main partition, all the other ones being old garbages).

Deleting these partitions will not be enough, you'll need then to recover the lost space by moving again the first recovery partition to the end of disk, and then extend again the main partition.

Each version of windows 10 will eat more than 1/2 GB of space by leaving old recoveries after the new one added.

To perform this cleanup, you need external tools (such as Partition Magic or Minitool Partition Wizard). Windows is stupid... sometimes and wastes your storage space (especially on SSD: they are fast, but limited in size compared to HDD): it's still up to you to cleanup that wasted space.

But most space wasted is in the voluminous logs and backups: once you have upgraded a version, and past one month, you cannot rollback but Windows will still keep that space used.

Typically after each image update there are about 12-16GB to reclaim on a typical Windows 10 installation, and for users of 64GB, SSD, this is considerable and you should remember that a SSD is fast only when it is not used at more than 50% of its theoretical maximum and has at least 16GB free, otherwise it will become slow by requiring constant trimming on the same sectors, and its lifetime will be reduced very fast: remember that writes on the paging files is the main cause of sectors being rewritten and trimmed, and trimming also occurs faster if you have low RAM amount as the paging files have higher activity, so think about increasing your RAM to preserve your SSD: 4GB for Windows 10 with a 64GB SSD is no longer viable and safe, consider 8GB RAM and at least 128GB of SSD; recycle your old small SSD only for secondary drives, or data backups, or as a work folder for temporary files, or storage for your collections of photos or music, but NOT for the main system volume, paging, and user profiles, or your system will crash and you'll loose everything too fast). Also try monitoring the SMART status of your SSD at least once a month, and perform storage cleanup to remove the space wasted by excessive backups, or multiple system snapshots.

If your SSD is large enough (128GB or more) consider partitioning it and keep a 16GB partition unallocated: it will be a permanent reserve to preserve the SSD lifetime and limit the too frequent and slow trimming (lifetime of a SSD depends on the number of times a sector is trimmed; if a sector cannot be trimmed and fails, the unused sectors in the free pool will still work, you won't loose anything: SMART control can inform you about the number of unrecoverable/untrimmable sectors, you'll be informed when this number starts growing, long before it creates severe problems and it will be time to buy a new SSD for the system, and convert that SSD to a secondary storage (still stable and usable for a very long time mostly for read-only accesses, such as your collection of musics or videos).

The clean command will do the service.. ;)

Not the answer you're looking for? Browse other questions tagged windows windows-10 partitioning diskpart or ask your own question.

2
Why does diskpart set the volume attributes on all volumes?
5
Cannot delete partition in diskpart - invalid argument?
87
How to delete the Recovery Partition in Windows 10?
2
Windows 10 after restoring the system from an image in a recovery partition, assigns it a letter
0
Safe to delete an extra EFI 'system' partition? Win10
2
Windows 10 cannot clear readonly attribute from HDD
0
Can't delete System reserved partition on wrong drive
0
Is it safe to delete the recovery partition?