How can I get ConEmu, Far Manager and the VS Developer Command Prompt to play nice together?

I'm currently trying to set up my environment such that I can open a ConEmu tab and it will automatically initialize Far Manager and the VS Developer Command Prompt environment.

My failed attempt was this:

This works in that it accomplishes what I want, but ConEmu doesn't like it because it leaves an active cmd.exe instance, so when you try to close the tab you will always get a warning, which is not ideal.

If you've never seen this before, this is what pops up on tab closure if you use the above task: 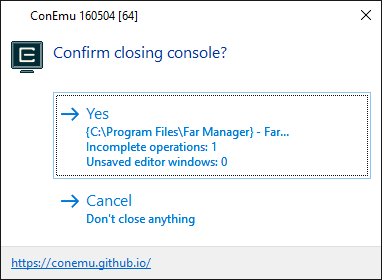 After a whole bunch of searching I found this link which contains a comment at the bottom by the ConEmu author:

Yep, that is working. But this method left cmd.exe in your working process tree.

Another way - run vcvarsall.bat from you shell (PowerShell or Far Manager) and export changed environment from cmd to the parent process. The advantage - you can set up different settings at run time.

The problem with this however is that I have to run this command manually after running far. I can't seem to find a way to automatically run that command after initializing Far.

It's not really a viable solution to do it manually because I have so many different environments to set up. Consider that I want a different tab for each compiler I'm using (MSVC, Clang, GCC, Intel C++ - sometimes multiple version of each, and pretty much always multiple architectures).

I'm pretty sure there would be some black magic way to do it, but I'm not familiar enough with ConEmu/Far yet to figure it out.

If I get super desperate I'll probably end up writing a plugin, but I'd rather avoid that if I can.

I made this by combining two predefined monstrous commands for {Far} and for {SDK::VS 15.0 x64 tools prompt} using &&: 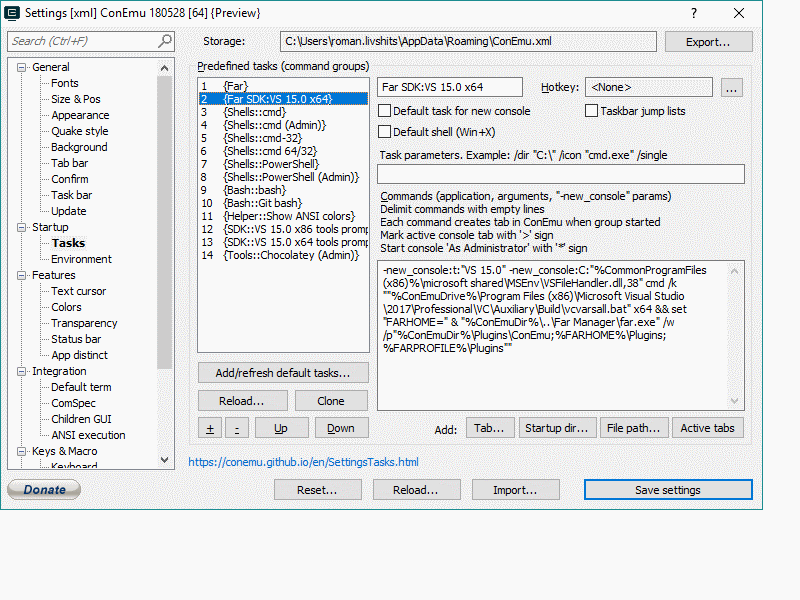 Not the answer you're looking for? Browse other questions tagged windows command-line visual-studio conemu far-manager or ask your own question.

0
Open ConEmu with /Dir is overriden by startup Task
0
Run Spyder as a ConEmu tab
0
Run Task when ConEmu is started by running “cmd”
1
Run ConEmu + Far in current folder
0
Output color = background color, if run Grunt commands via ConEmu
0
How can I use 'Visual studio shell' in task-scheduler for windows?