How do I extend my C drive?

From: Extend a Basic Volume

You can add more space to existing primary partitions and logical drives by extending them into adjacent unallocated space on the same disk. To extend a basic volume, it must be raw or formatted with the NTFS file system. You can extend a logical drive within contiguous free space in the extended partition that contains it.

I can extend my D drive, but not C. I suspect the problem is that the unallocated space is not "adjacent", but I have no clue how to change that.

How can I solve this? 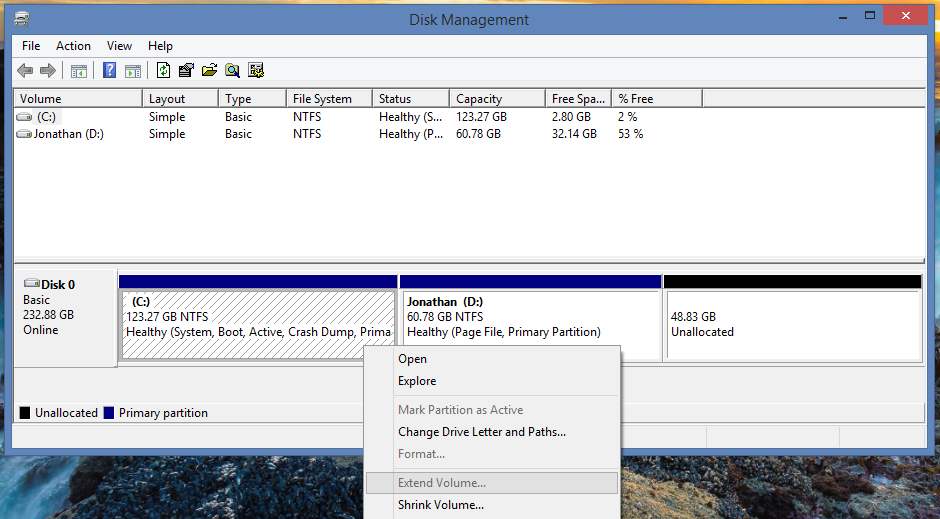 You cannot do that with windows onboard tools.

There are various tools available that would allow you to move the D partition to the end of the free space, thereby freeing space after C, but this is a relatively dangerous operation (if you have a power failure during the move, you could loose the content of D or the whole disk), and not strictly necessary.

In your case, it's probably easier to just

(NB: on a hard disk, the space for a partition needs to be physically contiguous, on SSD's, this should be irrelevant, but that's what you get when you insist on emulating old hardware...)

I'm not sure how effective this solution would be for someone with more data than you have. 30GB shouldn't take too long to move.

Convert the disk to a dynamic disk and it will let you extend it into the space a the end of the disk.

Just right click on Disk 0 and choose Convert to Dynamic disk. It will popup lots of warnings about not being able to boot other partitions/oses and so on. As you have the simplest of setups here you can OK them and convert.

You should then be able to extend the partition into the space at the end of the disk.

Not the answer you're looking for? Browse other questions tagged hard-drive partitioning or ask your own question.