How to split pages in a pdf?

I would like to cut a pdf file so that every "slide" is on a new page.
Original document layout looks like this: 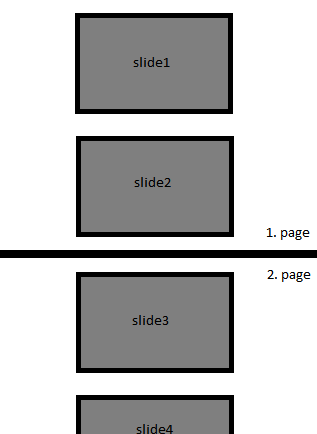 Sejda PDF can help you split PDF pages down the middle.

Once you have the document where each slide is on a separate page you can crop them to remove unnecessary margins:

Not sure if this can be done per slide, but If all the pages contain 2 slides, splitting pages in half may work for you.

Most probably, the "slides" on the pages are imported images. Depending on which method was used to create the pdf, a software might help you to extract the images. You could then print the images one-per-page as pdf.

On Windows, you could either screenshot the images, or, as an example, install imagemagick and also use pdfimages.

Edit: if all that still does not output images (e. g. because the slides are all Powerpoint shapes), I'd try to use a screenshot tool which helps me to automate the process. Picpick (for Windows), for example, can be set to screenshot the same area across multiple captures. So I'd set this up for the first slide, scroll to the next and hit PicPick's short key for screen capture.

Another alternative which comes to my mind for a scenario, where the slides are Powerpoint shapes is an image editor which can open pdfs, e. g. Irfanview with the pdf plugin. Open the pdf in that image editor and save it as a series of images. I'd go with bmp, png or tiff if the quality of the later images is important. After that, you have a series of images with two slides on each of them. Run imagemagick on them to extract the single images.

Not the answer you're looking for? Browse other questions tagged pdf or ask your own question.

3
Finding duplicate pages in pdf document
26
Split PDF document from command line in Linux?
1
Invert specific pages of a PDF
5
Remove PDF margins and print 2 pages per side
6
Word document changes after saving as pdf
4
How to convert PDF from two slides per page into one slide per page?
0
how to add pages to an existing pdf
0
Automatically merge pdf presentations pages