executing script manually works, but not in task scheduler

I have troubles with the task scheduler in windows 7 Pro. I want to run a script. Manual execution works perfectely, the task manager does nothing.

Part of the script is setting the focus onto a specific window using this VBScript:

The 2 lines above are only part of the bigger script, but for error checking I excluded everything else. First I have to get that running then the original.

The task is run with elevated privileges and with the same user as manual start. The computer is not shut down, not locked.

€dit: I want to run the vbs file, not a .bat file if possible, as I do not want a cmd window to open.

In order for a task to have access to the interactive session (i.e. running programs and open windows), you need to configure it to run under a logged on user. Simply go to the task properties and in the General tab select Run only when user is logged on. 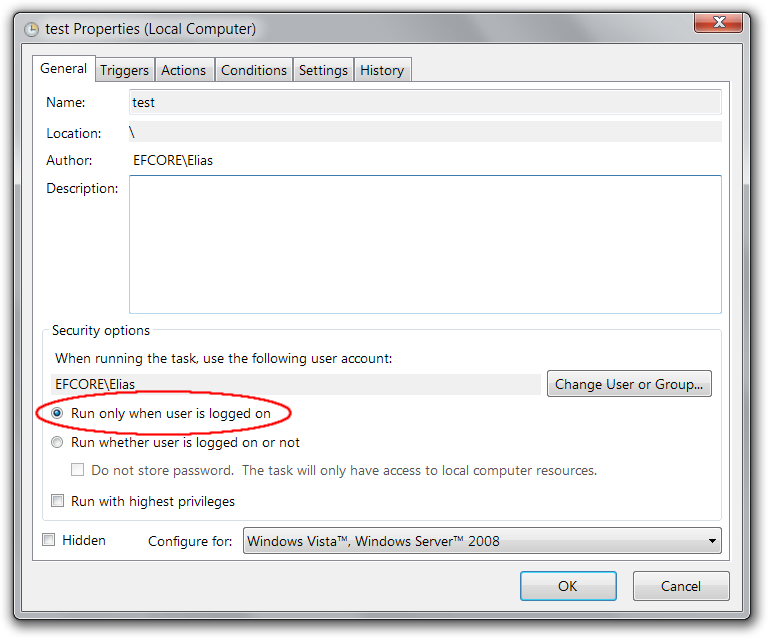 Using the other option is more secure, but that makes it more restrictive.

AppActivate doesn't work from a Task; most likely as a security precaution.

The general advice around the 'Net (assuming you then want to use SendKeys and alike) is to give up and use AutoIt instead of VBScript.

PS: I also tried PowerShell with SetForegroundWindow (imported from user32.dll), and it behaved the same way as VBS.

Not the answer you're looking for? Browse other questions tagged windows-7 script scheduled-tasks or ask your own question.