Why is the Java plugin (JRE) disabled in Chrome?

Why is the Java plugin (JRE) is disabled in Chrome? It is some security concern?

Chrome no longer supports NPAPI (technology required for Java applets) The Java plug-in for web browsers relies on the cross platform plugin architecture NPAPI, which has been supported by all major web browsers for over a decade. Google's Chrome version 45 (scheduled for release in September 2015) drops support for NPAPI, impacting plugins for Silverlight, Java, Facebook Video and other similar NPAPI based plugins.

But anyone knows why? How it could be dangerous for Chrome user with latest version of Java JRE installed?

Why is Java disabled in Chrome? It is some security concern?

The reasons prompting the disabling of NPAPI, and therefore Java, include the following according to the Chromium Blog:

How it could be dangerous for Chrome users with latest version of Java JRE installed?

Another source for vulnerabilities is the fact that Java hasn’t released an automatic updater that doesn’t require user intervention and administrative rights. For example, Google Chrome and Flash Player have. This feature allows users to get automatic updates without being prompted to take action, making updates easier.

For lack of an automatic updates system, many users ignore Java updates and even fear installing them, because of malware that used Java updates as an infection vector in the past or similar experiences.

Just know that all these vulnerabilities are what cyber criminals thrive on.

Data extracted from our own database confirms that Java is the second biggest security vulnerability that requires constant patching, after Adobe’s Flash plugin.

In 2015 alone, we’ve already deployed 105925 patches for Java Runtime Environment for our clients. 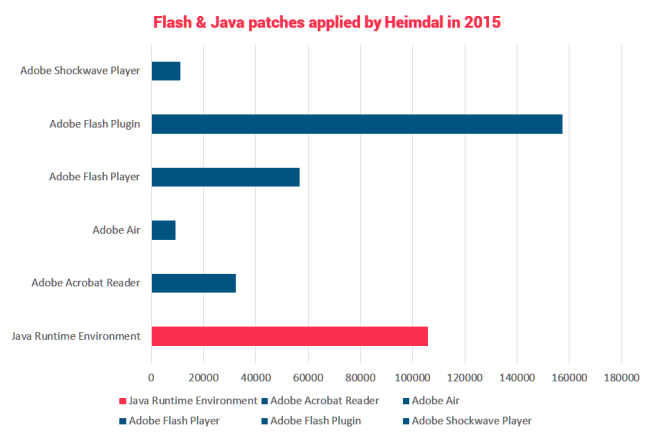 Read the rest of the article for a detailed explanation and commentary.

Source Why are Java’s Vulnerabilities One of the Biggest Security Holes on Your Computer?

The Final Countdown for NPAPI

Last September we announced our plan to remove NPAPI support from Chrome, a change that will improve Chrome’s security, speed, and stability as well as reduce complexity in the code base.

Source The Final Countdown for NPAPI

NPAPI’s 90s-era architecture has become a leading cause of hangs, crashes, security incidents, and code complexity. Because of this, Chrome will be phasing out NPAPI support over the coming year. We feel the web is ready for this transition. NPAPI isn’t supported on mobile devices, and Mozilla plans to make all plug-ins except the current version of Flash click-to-play by default.

As explained by Google, the Netscape Plug-in API (NPAPI) was needed in the early days of web browsers to extend their features. Unfortunately, it provided access to the underlying machine. Thus, if the plugin contained a vulnerability and an attacker exploited it, the attacker bypassed the sandboxing of the browser and had access to the machine.

Such attack vectors has been heavily used in the past to infect machines, leading to the advice saying that you should disable Java on your browser. Many features provided by Java plugins are now included by the browser itself (e.g. HTML5) with better performance and security or with extensions running in a sandbox (e.g. NaCL). That's why the decision to no longer support Java plugins has been made: high risk, but no real need for it.

For a long time there has been a move away from Java, along with other plugins like Flash or Silverlight, on the web. One of the goals with HTML5 was to create a framework where plugins are not needed (hence tags like <audio> and <video>). By now the only reason to support Java is for compatibility with legacy systems that should probably have been retired by now anyway.

So why are plugins like Java a security threat? Because history has proven that there will always be a steady stream of security holes allowing for a multitude of exploits. It is just inherently harder to secure a VM running Java bytecode than it is to sandbox an interpreted script language like JavaScript. Just have a look at these statistics.

As you say, it is a good practice to keep your plugins updated. But that is not enough. First, a lot of people don't. It was recently revealed that even the Swedish equivalent of NSA was running outdated Java plugins with known security vulnerabilities. If they can't get it right, do you expect the average home user to do so? Second, there is no way you can protect yourself from zero days. No matter how fast Oracle produce patches, you will be at risk.

Even Oracle have acknowledged that the era of Java applets is over. From Ars Technica (Jan 2016):

The much-maligned Java browser plugin, source of so many security flaws over the years, is to be killed off by Oracle. It will not be mourned.

Oracle, which acquired Java as part of its 2010 purchase of Sun Microsystems, has announced that the plugin will be deprecated in the next release of Java, version 9, which is currently available as an early access beta. A future release will remove it entirely.

19
How do I run Java applets?
6
Why is Java disabled in Chrome?

7
How can I set one browser to use JRE 1.5 and another to use JRE 1.6?
1
Firefox high GPU usage
4
Java plugin in the browser doesn't work even though it is enabled
12
What does the removal of NPAPI plugin support mean to an end user?
0
Java plugin refuses to run
6
Where to download the last Chrome version with Java (NPAPI) support?
3
All browsers do not see Java JRE at Windows 8.1