What's the difference between stereo and hands free?

Every time I connect a bluetooth headset it shows up as 2 things on sound playback devices. 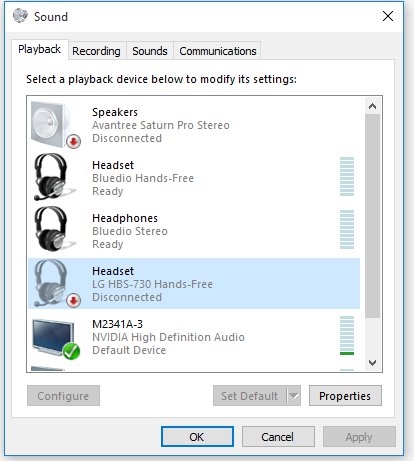 I can choose bluedio stereo or bluedio hands free.

I often see the stereo part to be unstable though.

The "Stereo" device is technically known in Bluetooth jargon as "Advanced Audio Distribution Profile", or with an acronym A2DP. It is optimized for transferring 2-channel stereo sound with good quality in one direction only.

The "Hands-free" device corresponds, respectively, to either the "Hands-Free Profile" (HFP) or "Headset Profile" (HSP). Both of them are older than A2DP, and were initially designed to pass telephone-quality sound (2-directional mono sound, limited frequency response, optimized for speech only). Both of them, and in particular the HSP profile, are designed to minimize the processing power requirements. This was important for wireless Bluetooth hands-free devices, which usually had, and still have, an extremely limited amount of battery power available because of limitations of physical size.

Since then, HFP has been expanded with optional better-quality sound codecs, as newer high-efficiency processors have made it easier to implement more complicated protocols and sound codecs in low-power devices. HSP has remained the minimalist implementation, to be used when every milliwatt-second of battery capacity needs to be used efficiently, and as a fallback to be used if the more advanced protocols aren't compatible.

The reason why the A2DP device gets disabled when two-way communications is required is probably again related to processing power requirements. Running both HFP/HSP and A2DP simultaneously would require running two potentially very different codec modules simultaneously, and then mixing their outputs either in digital or analog form. Digital mixing would increase processing power requirements still further, while analog mixing would make the device hardware design more complicated.

Disabling A2DP while HFP or HSP is active is the easy way out: it will reduce both technical complexity and the power budget of the device.

I've experimented with my own bluetooth headset and here's my results:

If you're woundering about things like teamspeak, discord, skype, etc. and why you are unable to hear other applications when you join a call or a voice chat, it's because these communication applications enable the hands-free devices, which in turn disables the main devices playing back other applications' audio. To solve this, you can use an external microphone, like the built-in one, or you can switch to the lower quality hands-free playback device. You can change all this from the "Sound" settings on Windows.

0
How can I get my Airpods to do Mic/Sound at the same time with my Windows 10 Dell Laptop?
0
Sony WH-CH700N bluetooth poor sound quality in one mode, no sound in other
1
Windows Server 2019 Bluetooth Headset Hands Free Not Working