What info/data is sent to the OS when pressing keypad numbers with num lock off?

I have noticed that when pressing keypad numbers (not standard keyboard numbers) while num-lock is disabled, the computer is receiving some sort of input/data.

On Windows 7, at the log-in screen, the cursor moves from the password field to other fields.

In software running on a Win7 machine the cursor flashes.

I am curious as to what info the computer is receiving. Before encountering this behavior I would have posited that the computer would simply ignore any input whatsoever; but this does not seem to be the case.

When you press any key, a scancode is sent to the motherboard.

When you release that key, a different scancode is sent.

with num lock off?

The state of num-lock has no effect on what is sent from keyboard to motherboard. It only affects how your operating system interprets the meaning of the scancodes.

Some keyboards have some local intelligence built in, these may not send scancodes under some circumstances (e.g. built-in calculator, toggle games modes, etc).

Most basic keyboards do not. For example, you may have noticed that when you press (and release) Num Lock a LED indicator light goes on or off. The state of the LED is not controlled internally by the keyboard itself. This is why it is a useful test of your keyboard's connection to the motherboard and of the healthiness of your operating system.

while num-lock is disabled ... the cursor moves from ... field to other fields.

That's because the numeric keypad is normally labelled like this. 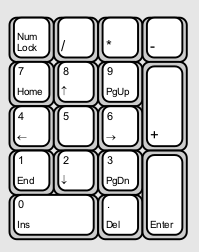 †More accurately, the OS chooses to interpret the scancode sent by releasing Num-Lock as switching to an alternative set of interpretations of the scancodes sent when numeric keypad keys are released.

Not the answer you're looking for? Browse other questions tagged windows-7 keyboard or ask your own question.